you know those days? the ones where you are trying to get the most harmless, most 'non-threatening to the universe' things done, yet the universe insists on thwarting you every step of the way? well, i am having one of those days.

first, there was my attempt at making pancakes with the (latest in a long line of) gluten-free baking mix i recently purchased. i knew something was wrong when the batter looked like a bowl of creamy mashed potato. every time i added more liquid and stirred, it just went back to being far too thick. 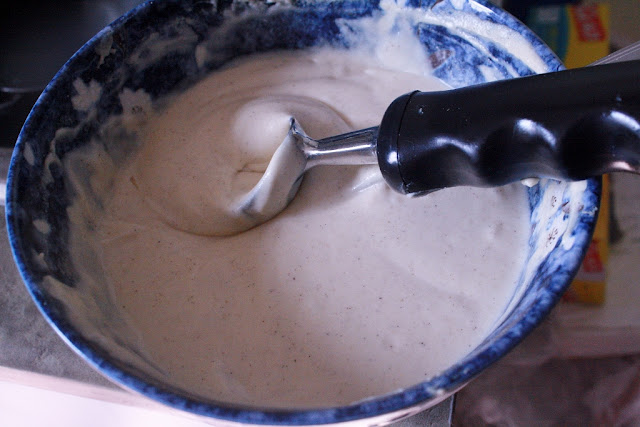 i attempted a few palm-sized pancakes, and a quick nibble of a bit torn from one of them left me regretting the whole experiment. they look okay, but the texture was wrong in every possible way. trust me. 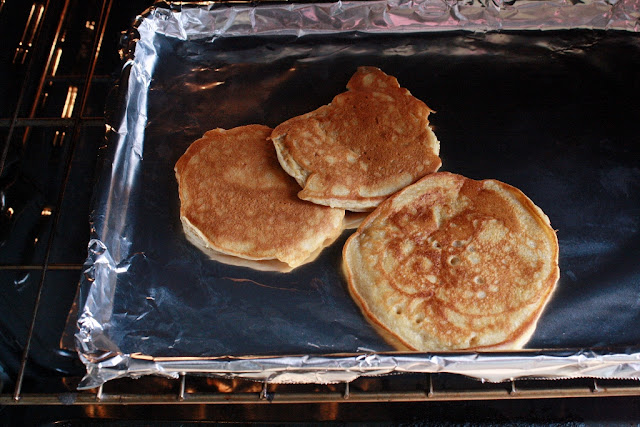 i ended up tossing the pancakes into the trash and rinsing the remaining batter down the drain.

him: why'd you do that? i would have eaten them.

all these years later, and he clearly still does not understand my need to destroy something when i am frustrated. luckily i really like that frying pan, or it too might have ended up in the bin.

so, after abandoning the much-anticipated breakfast of pancakes and sausages, we settled on a breakfast of sausages and egg (as we forgot to buy more eggs, so we had to settle for one each). i had mine with some toast made from the gluten-free bread that has been sitting in the freezer for the past two months (at least), while he had delicious normal-people bread. most very underwhelming, indeed.

one frustration out of the way, and i returned to the living room and my comfy sofa, intent on watching the next match of the World Cup while folding many tiny pieces of paper (i will explain that part later), and doing the same to a massive pile of clean laundry. that was when i found something special waiting for me.

i do not know what that little cat has against this plant, but i am fairly certain that it is her life's goal to see it destroyed. 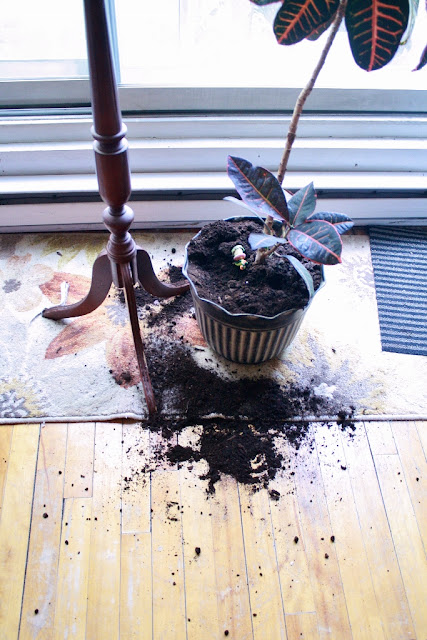 so, i moved everything off the rug, knocked all the soil to the floor, and placed the rug on the balcony to dry before i attempted to vacuum it. that was an impressive endeavor on my part as the "feels like" temperature (assisted by the crazy-high humidity) is currently somewhere in the mid-forties (think a very humid hundred-and-teens, if you speak Fahrenheit). i then swept up all of the recently-liberated soil, and returned it to its rightful place, before finally resuming my own plan of paper-folding... which is when things decided to go even further sideways. allow me to explain.

it all started some weeks ago, when i decided that i really need to get back to my blog, lest i abandon it entirely. i then proceeded to overthink the whole thing, which i generally find to be the most effective tool in the war against procrastination. do nothing while you overthink everything. yep. makes perfect sense to me.

me: even if i force myself to post something now, that is not going to guarantee that i will want to do so again in the near future. maybe i could try for a post-a-day week.
him: you could do that.
me: but it's already the middle of week. maybe i should wait to start it on Sunday.
him: the week can start whatever day you like. it's your blog.
me: true, but it would bug me a bit if i did that...

[which, i should point out, is a total lie, but it was one i was willing to believe at the time.]

me: ... but if i say i am going to wait until the weekend, then i would end up changing my mind before the weekend even gets here. maybe it's best not to even post anything at all.
him: do whatever you like. it's your blog.

there are few things in life as frustrating as dealing with people who take things so very rationally.

this continued on for most of the past several weeks, until i stumbled upon a truly inspired idea. i would do what any procrastinator worth their salt would do when locked in ongoing conflict with the wise and powerful gods of procrastination... i would devise an even-more-elaborate reason to procrastinate. i would super-procrastinate! genius!!!

then i noticed that June was coming to an end, and that July would begin on a Sunday, thus removing any concerns i may claim to have about starting things on random days of the week. this seemed like perfect timing to get back into blogging (somewhat) regularly.

i briefly considered coming up with some sort of incentive to motivate myself to post even a few sentences every single day of the month, but i knew that any reward of either the positive or negative type would have zero effect on me, as i tend not to follow my own rules to begin with.

so i dug deep down, and came up with the single-greatest motivator i could find for doing the thing. i am going to blog every single day of July... for sanity's sake.

whether it is just a few quick sentences, or something that resembles a Harry Potter novel in length, every second i spend on this endeavor in the coming weeks will mean one less second spent lamenting my complete loss of faith in humanity.

so, here is how i intend to proceed.

i created a list of topics that i either started writing about in the many drafts i have yet to complete, or all the other pointless things that came to mind while i was wrestling with procrastination in recent weeks.

i then folded a large sheet of paper into thirty blocks (ignore the mucky floors, as our building is about a hundred years old... and the floors are about a hundred and fifty). 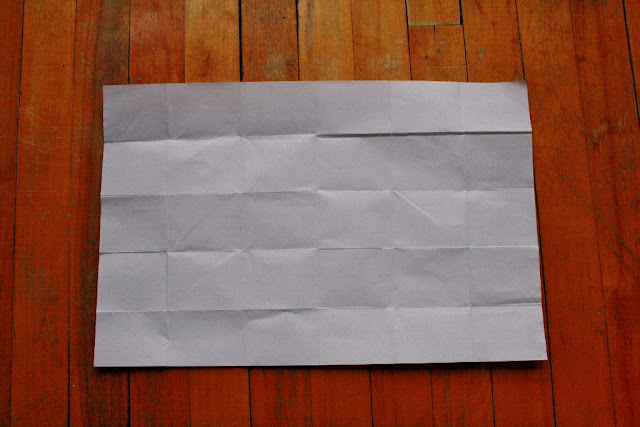 i wrote one item from said list in each block. 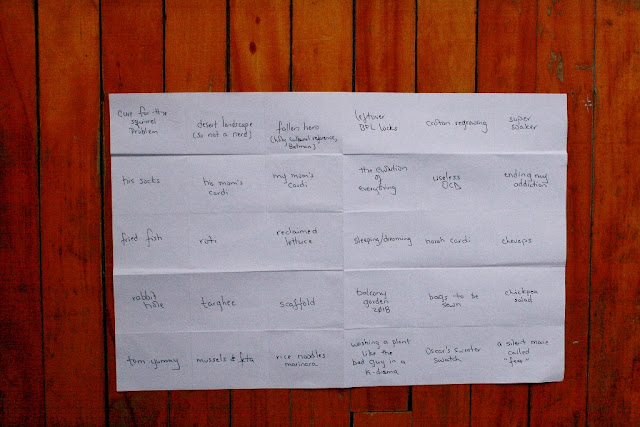 i then ripped them apart and folded them up neatly. so, now i get to shove my hand into a mini treasure chest each day, and pull out a folded piece of paper that will serve as my inspiration for said day's post. 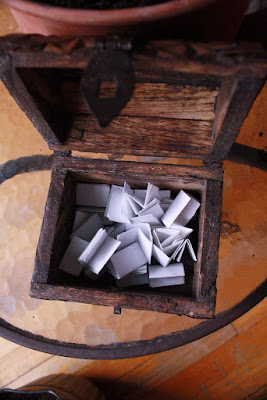 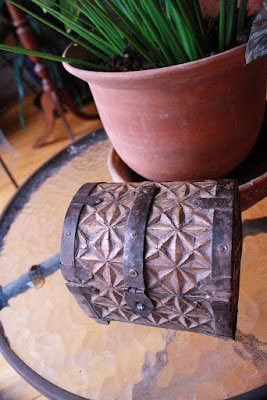 i should point out that i was about to rip the large piece of paper into smaller bits a day or two ago, when i found myself faced with an impatient animator who was apparently waiting for me so we could run a few errands around town. i folded up the sheet, and tucked it into some small nook, intent on returning to that task at some future point.

so, there i was earlier today. middle of a heatwave, failed pancakes, freezer-burnt toast, and a cat that is being paid by some hostile force to drive me completely insane. that sounded like the perfect time to settle down to a bit of sanity in the form of paper ripping... if only i knew where said paper was to be found.

it is always the little things that threaten to push you completely over the edge. so, after a brief spell of fuming about, shoving my hand into every possible space where i might have wedged a many-times-folded sheet of paper in my haste to get out the door, i was ready to abandon the whole blog-a-day idea and just resign myself to spending the rest of the day (and the month) being frustrated at the world... which is precisely what i was hoping to escape in the first place.

so, i grabbed another large sheet of paper from the studio, (re)folded it, then proceeded to (re)write out the content of my list, and rip the whole thing into smaller pieces which were folded and deposited in the most suitable container i possess. a tiny treasure chest... because my sanity is a very precious thing. 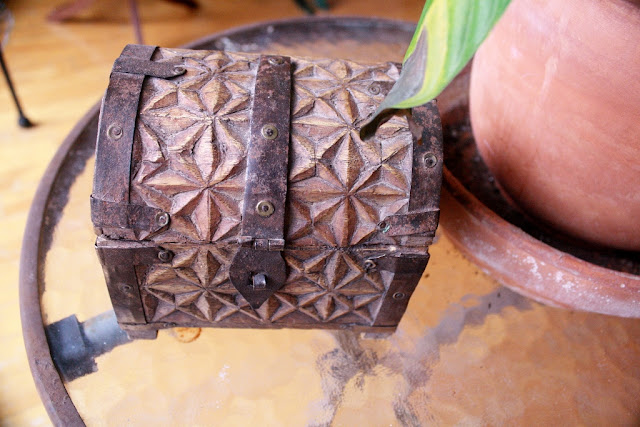 i actually look forward to opening that lid every day to select a new topic. naturally, this system goes into effect tomorrow, because... well... you know... procrastination.

oh, and happy birthday, Canada!!! thank you for letting me hang here for a while.
Posted by n.ayisha