the art of joyless gardening (a book by me)...

who knew that dragging a corpse-weight worth of compost up four flights of stairs would result in so much pain... who knew! we spent most of Sunday working on this year's Balcony Garden Project, and i seem to have hurt my everything! it is Wednesday, and the muscles at the back of my thighs still scream in protest every time i try to squat or walk or stand. standing is overrated.


with the compost safely inside, we caught our collective breath and sucked down fluid in large quantities (not gonna lie... i started out drinking water, and ended up drinking wine), then it was time for the real fun to begin. i spent the rest of the afternoon dragging large planters from one spot to another, mixing compost into the ones that were already filled, filling up a few more empty ones, and changing my mind about a hundred times as to what should be planted in each one. meanwhile, my favorite animator (who luckily does not share my aversion to high places) dismantled the screen on the balcony railing, replacing it with a thin wire mesh that should serve the dual purpose of keeping the cats in and the squirrels out. that last bit is wishful thinking, as the squirrels adamantly refuse to recognize any man-made boundaries, but we figure we would give it a try.

with so little space for growing things, extra precautions have to be taken to protect our precious seedlings, so we (mainly he) constructed cages to cover the planters. they will remain in place until the plants are large/strong enough that a single chomp from a furry intruder will not mean the death of the whole thing. it looks a bit bonkers right now, but it would be heartbreaking to have done all that work, then to wake up the next day and find it all destroyed. i would probably be slightly less insane with a conventional backyard garden where you can afford to lose one or two plants, but when your whole setup consists of twenty-something plants dangling precariously several stories above street level, there is no such thing as being too cautious. still, i cannot wait until the cages come off.


me: look at it.
him: yeah...?
me: it's kinda sad.
him: what's wrong with it?
me: it looks like a vegetable garden... in a prison yard. this was supposed to be my joyful activity. there is no joy.
him: that could be a thing. you should write a book about it. The Art of Joyless Gardening, by N Ayisha M---.


so, for the next few weeks, i will be staring at a whole lot of this. 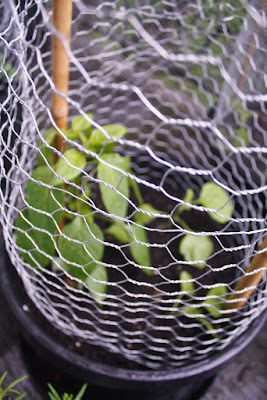 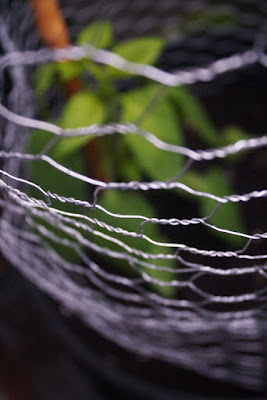 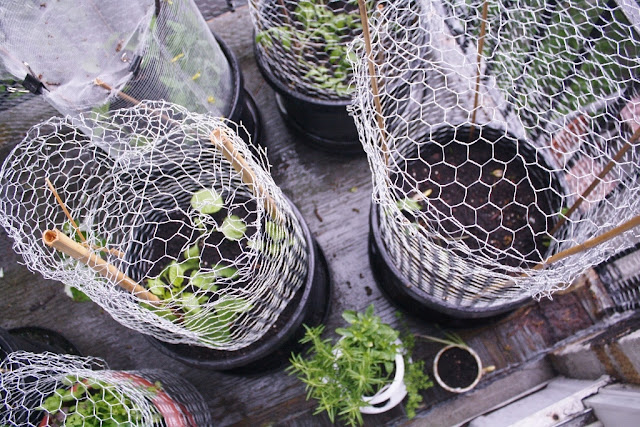 while we were out shopping for compost, i kept walking past a display of plastic strawberry pots filled with assorted herbs, and i made the mistake of petting some lemon balm, which only served to remind me that i really like lemon balm. i have never actually cooked with it, but the stuff is a-ma-zing in pitchers of iced tea and lemonade. it is also quite lovely in boozy summery drinks, especially the ones made with vodka and/or gin. naturally, i had to find a lemon balm plant. two-and-a-half employees later, and it turned out they were sold out except for the ones crammed into those strawberry pot arrangements, so i bought a plastic strawberry pot just so i could get the lemon balm. i removed it from said container and replanted it in a bigger pot so that it will have more room to grow and spread, because you can never have too much lemon balm. i also repotted the curly parsley that was planted on the other side, so now i am left with a plastic strawberry pot with two empty slots. there is a joke in there somewhere. 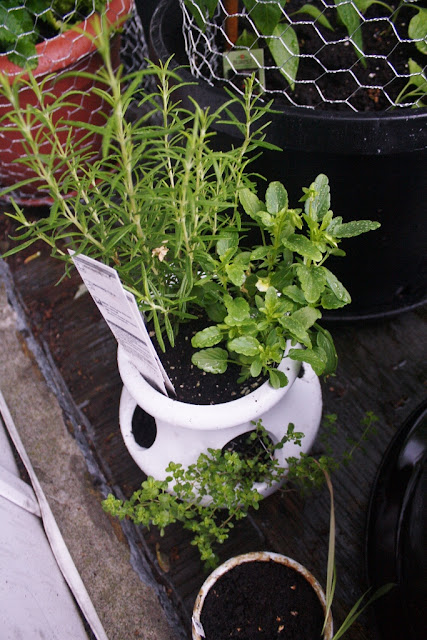 we did manage to make one mildly-thrilling discovery while working on our tiny garden. about a month or so ago, i sprinkled seeds for beets and sugar-snap peas into a couple of the containers, so i decided to top them off with some compost to give the plants a bit of a boost. he was removing the cage of joylessness from the sugar-snaps when he paused and told me to come have a look. do you see it? 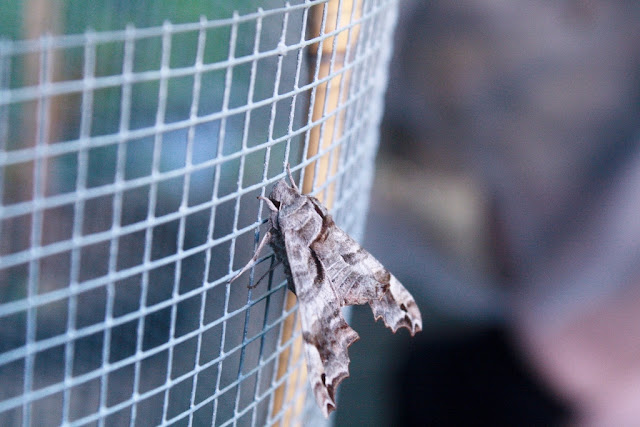 my insect identification is worse than my bird identification, but i am fairly certain that this is a Lettered sphinx moth (Deidamia inscriptum). the larvae feed primarily on grape plants, and there is a massive hedge of wild grapes that runs along the railroad track at the bottom of our street. the vines continue on for a mile (or more) along the tall fence that separates the tracks from the public roadway, so this area would be ideal for Lettered sphinxes looking to lay their eggs. i usually panic at the appearance of even a single moth (especially the ones that look like they are in search of a wooly meal), but this one can stay as long as (s)he likes. welcome, new friend. welcome. 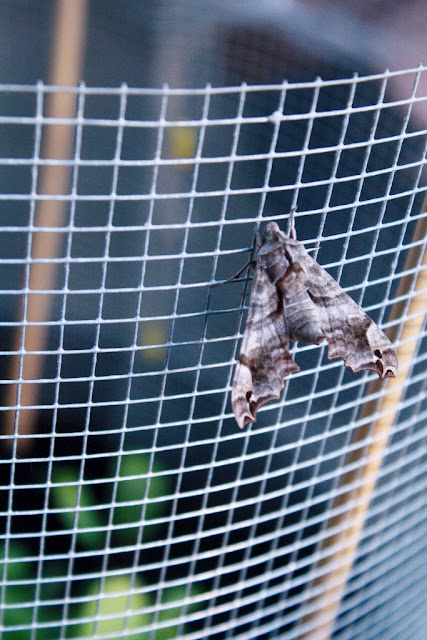 the combo of black, greys, and browns with the splash of bright green in the background calls to me. i may have to pull out my dye pot and translate this image into a color scheme for some yarn. 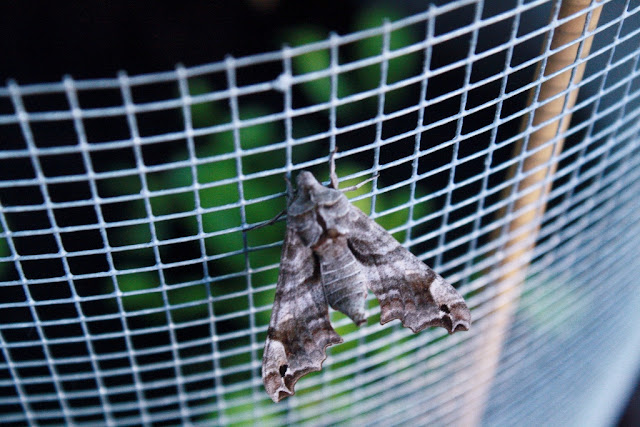 for now, i am going to finish my coffee and stare out the window for a while. if i look hard enough, i may just find some joy.

it is a long holiday weekend in most of Canada, and i have been abandoned for the whole thing. my favorite animator is off at his folks' place for a combination of celebrating his dad's birthday and helping them plant this year's vegetable garden. there also seems to be lots of grilling and much merriment with his nephews from the reports i am getting. meanwhile, i spent the day buried under a down blanket trying to weather a truly spectacular head-cold-type-thing. i blame this entirely on my mom who saw fit to pass along a familial affinity for maladies of the sinus cavity. so much for the 'unofficial start of Summer'. thanks, mom.

this holiday technically has something to do with Queen Victoria's birthday and that of the current Queen. however, most people have moved on from caring about silly things like monarchy. in fact, i am fairly certain that Quebec law prohibits even thinking about members of the British royal family. the day is dedicated to "national patriots" in said province... just do not ask which nation the patriots are meant to represent, or you might set off World War III.  the whole thing is more commonly referred to as the "May long weekend" or as "May two-four". the former refers to the holiday having been moved so that it always falls on a Monday (ensuring a long weekend), while the latter is a double entendre referring to the actual birthday of QV... and the number of cans in a case of beer!!! i kid you not. that, ladies and gentlemen, is my kind of holiday!

truth be told, we are not big on celebrating stuff around here. having long abandoned any pretense of religiosity, and having very little inclination toward flag-waving on behalf of our respective nationalities, there really is not a whole lot left over by way of holidays. the rest of them fall either into the category of 'things you do to appease small children' (like Christmas or International Beg-For-Candy Day) or 'holidays that exist only to prey on your guilt' (uhm... happy Mother's Day again, Mom). exactly. speaking of which...

i was talking to my mom last Sunday, when a quick, darting movement caught my attention. there was something colorful flittering about in the canopy of my local maple tree. do you see it? 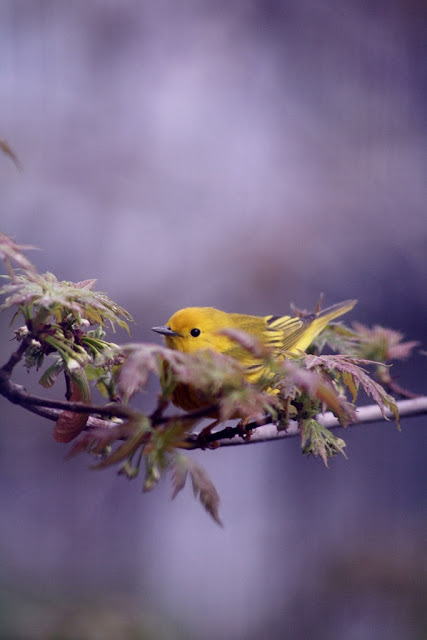 i grabbed my camera, tucked the phone firmly against the side of my neck, and started snapping away through the double-glass doors as i did not want to scare it away. 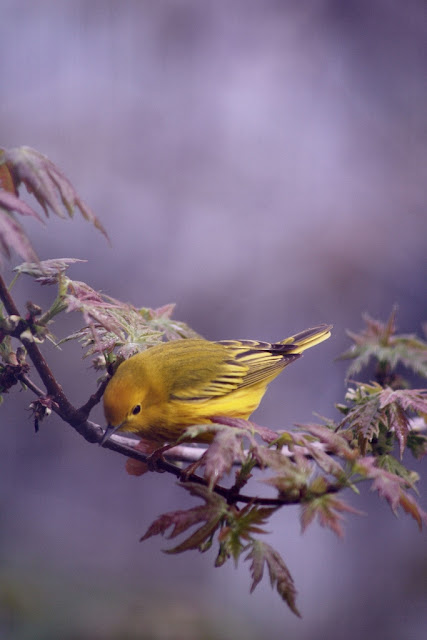 bird identification ranks very low on my otherwise-impressive list of useless life skills, but i am inclined to think it is an Orange-crowned Warbler. (s)he lacks a true orange crown, which is common according to the description, but there is a distinct orangish blush to the top of its head... or maybe that was just shade from the maple leaves. in either case, should my identification prove to be incorrect, i am blaming it on the folks over at the National Audubon Society. 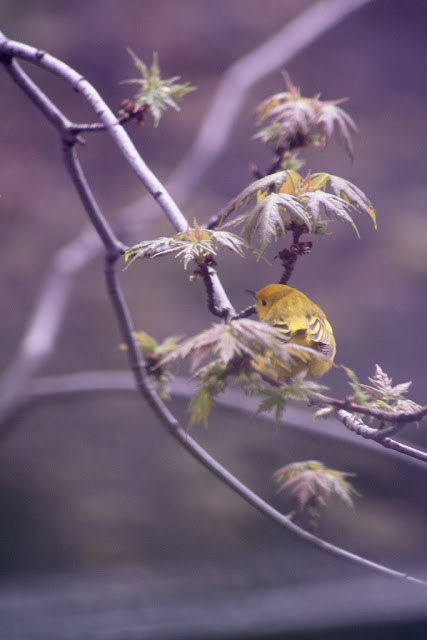 while we are on the subject of societies, there was a brief meeting last Tuesday of the Wednesday Watercolour Society. actually, we sat on the sofa and took stock of our supplies, then reorganized them in a new box, as the old box was falling to pieces. he purchased a series of instructional videos by some artist whose work he likes, so the plan is to go through them one at a time, with paintbrushes and loaded palettes in hand. his paintings will probably be on exhibit in a local museum by the end of the Summer, while mine will (still) look like the artwork of a blind chimpanzee. sigh.

i finished a few new crafty projects recently, but i will talk more about them in my next post... maybe later this week... maybe. i have been keeping busy stalking sheep online and making a nuisance of myself to people on multiple sides of the globe. that too will be explained in greater detail next time around. for now, i am gong to refill my teacup and maybe muster enough energy to work a few rounds on my current knitting project... maybe.

the yarn was repurposed from a project i started (and abandoned) early last year. 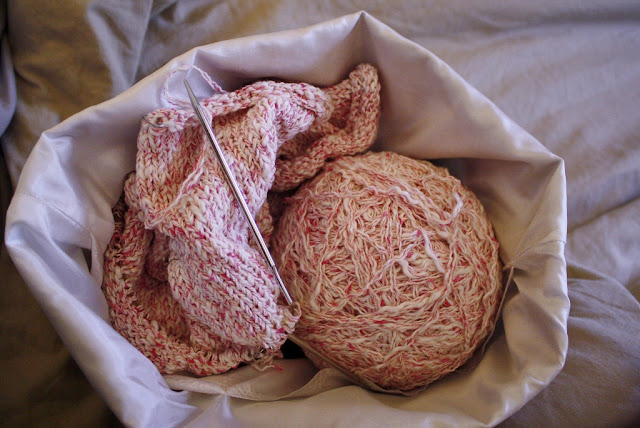 me: i think i'm gonna frog this, because i am never gonna wear it.
him:  but that's your Amy Herzog cardi.

you could have knocked me over with the proverbial feather. this coming from the man who cannot remember the security code for the main door of our building.

the yarn is (still) pink and i am (still) uneasy at the prospect of wearing such colorful things, but i am slowly getting over that fear. i must be sicker than i think. [ignore the sticker on my 'puter. it is the please-spend-more-money coupon-code-thingie that came with the latest edition of Making magazine.] 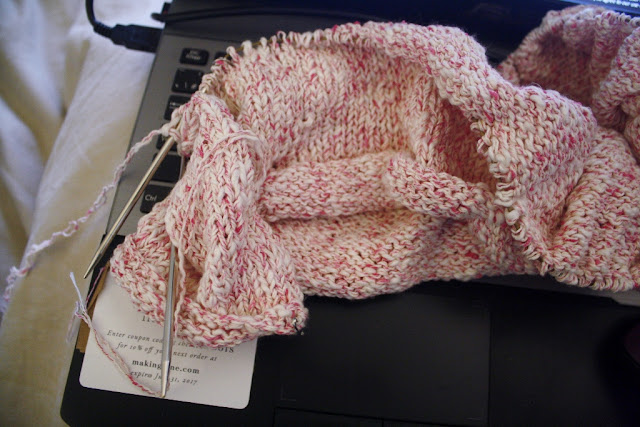 if it is (still) Sunday where you are, i hope you are having a happy Rapture Party Day, and if it is Monday... happy Sherlock Holmes Day. even if tradition dictates that you celebrate it with a large mug of cocoa and a well-worn copy of a favorite mystery, that is (still) my kind of holiday!