[my dream of composing a new post every day this week did not go quite as planned. oh well... life goes on.]

we live with two cats. i would not go so far as to claim them as property, as i feel more owned than owning on an average day. still, they are my two best girls, and they seem to be of the firm opinion that my balcony garden is their private space. 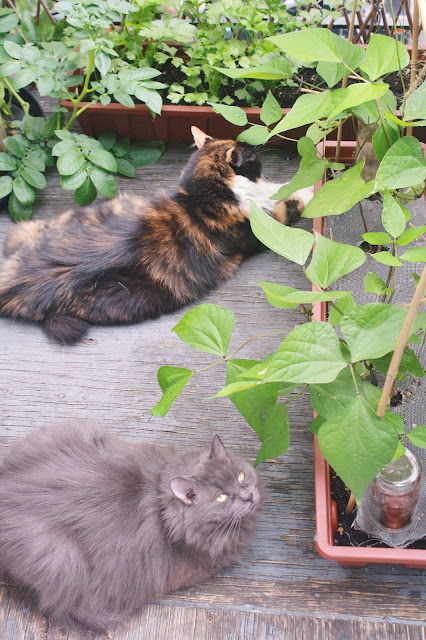 Baby Bear is content to lay in the fresh air, watching the wildlife flutter by... 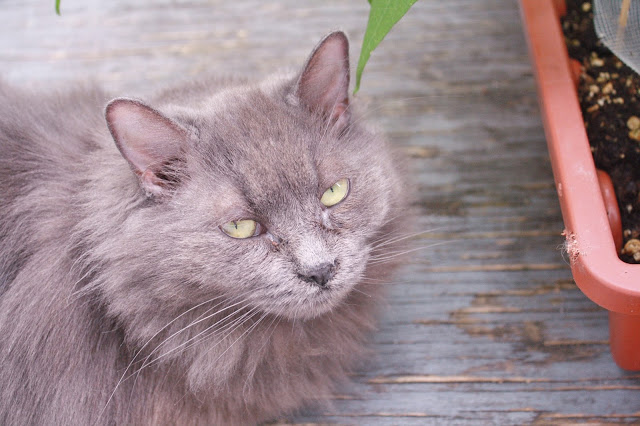 ... but i am certain that Mama Kitty hears the voice of David Attenborough narrating her adventures. "here we see the elder majestic hunter using the natural foliage for cover as she lays in wait for her prey". it sounds far better than "she is napping between the celery and the beans, waiting to scare off any pigeons that land on the rail". if only i could convince her to show the same territorial spirit where the squirrels are concerned. 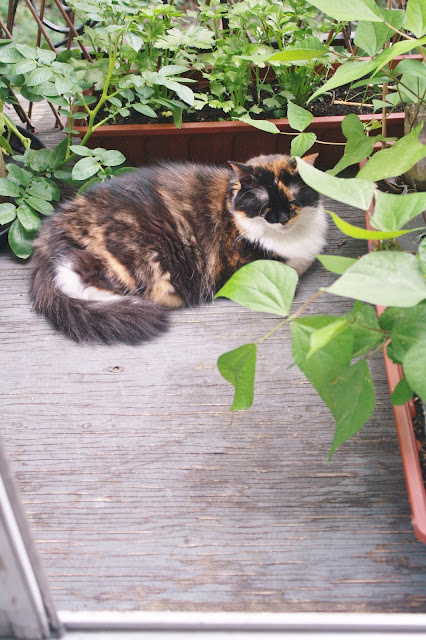 we started the balcony garden project with zero objectives in mind, other than to add some element of amusement to the mundanity of everyday life. the potato plants are still lush and green, while the eggplant leaves are approaching the size of dinner plates. 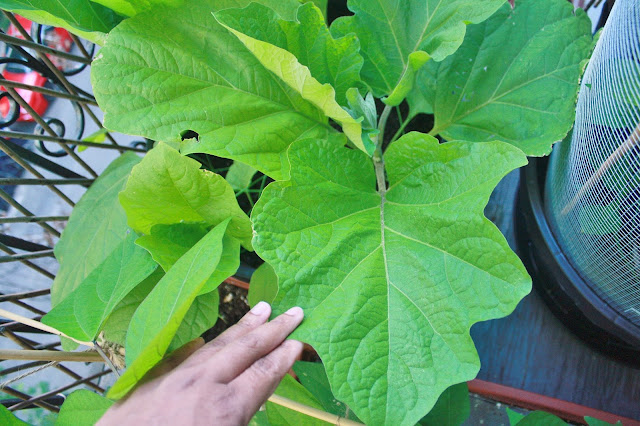 however, we have seen very little by way of produce thus far. unless, of course, you count the many zucchini blossoms. the zukes were starting to show signs of powdery mildew, so we decided to cut out the plants before it had a chance to spread. this is literally the last of this year's squash blossom harvest. so much sadness. 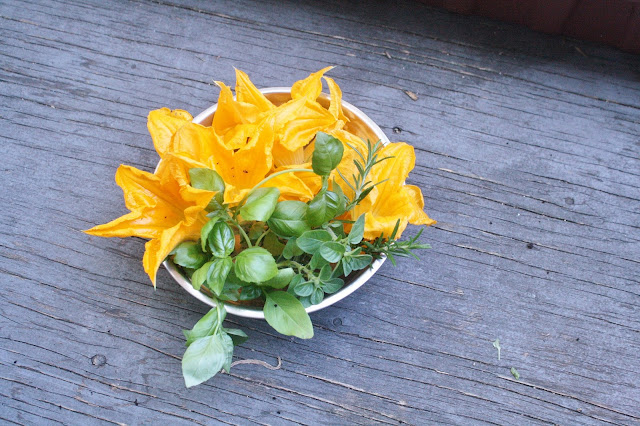 on the up side, we have been eating lots of yummy herb-flavored things. in addition to the odd sprig of thyme, oregano, or rosemary tossed into a sauce, i have been thinning out the Genovese Basil, which is a great excuse for making pesto (a pasta-sauce/sandwich-spread/salad-dressing that, in my humble opinion, deserves its own tier on the food pyramid)... 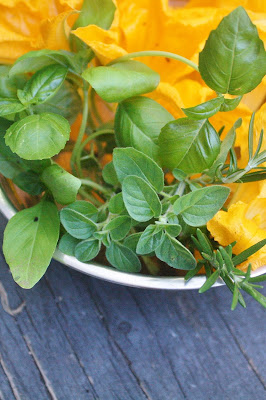 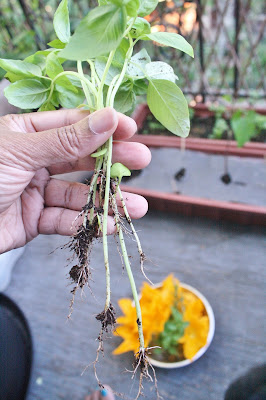 ...and deadheading the Thai Basil, the flowers of which will be added to a delicious coconut milk curry in the next day or two. 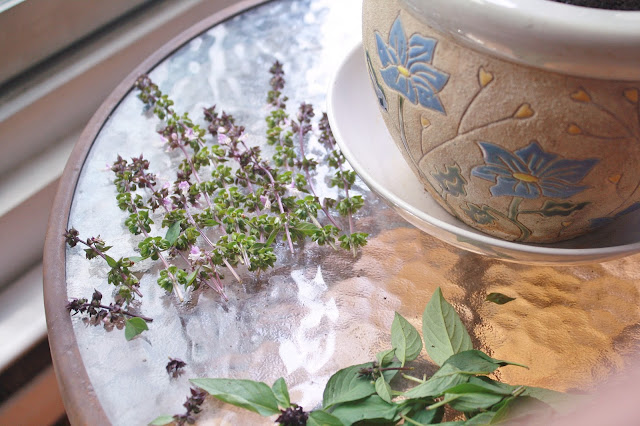 the weather has been all over the place this summer, going from a steaming thirty-something degrees (C) one day to the low-teens the next. the plants would practically double in size on the hotter days, then show zero sign of growth when the temperature drops off. i am used to growing vegetables in the middle of Brooklyn, NYC, which is its own micro-zone that is usually several degrees warmer than the surrounding region. getting used to the conditions in Montreal has proven to be the biggest challenge of this adventure. while i have no regrets about the time (or money) invested thus far, i was beginning to question whether i wanted to do it again next year.


then the beans began to flower... 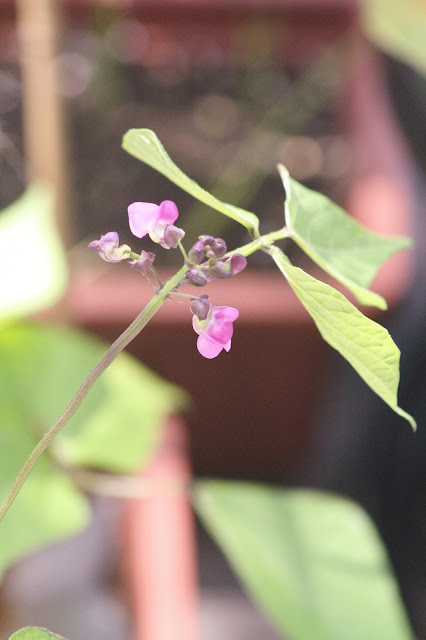 and, before i knew it, the first pods started to appear. 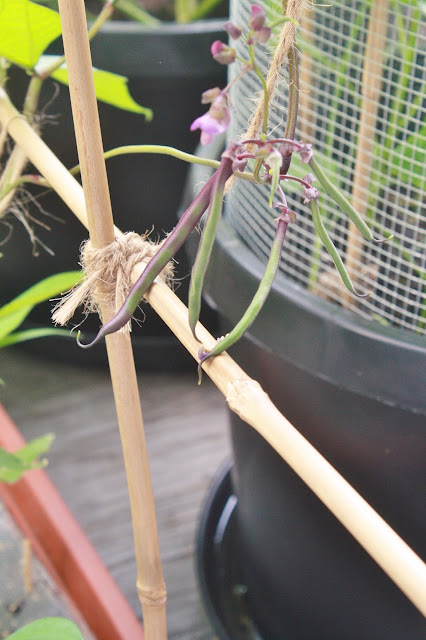 and, yes, they do turn that beautiful, deep-purple color as the beans grow (sadly, the color disappears when they are cooked). so, now i am already looking forward to next summer, which is the best possible outcome of any adventure. 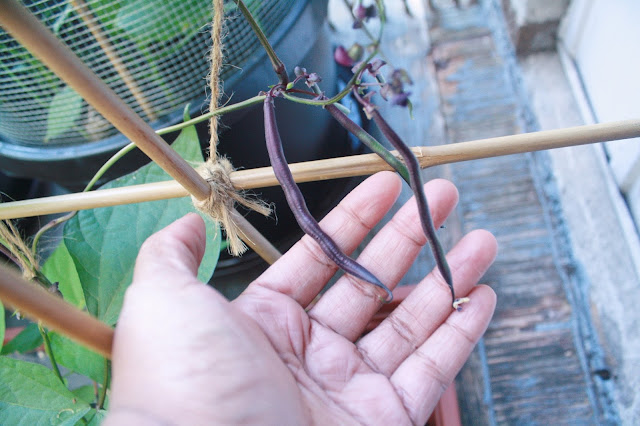 oh, about that Berry Minty Lemon Sorbet i mentioned last time around? a day or two ago, i was stumbling groggily toward the bedroom for a mid-afternoon nap, when i heard the voice of my favorite animator echoing down the hall. "if you want to take a picture of that sorbet, you better do it now, 'cause it will probably be gone by the time you wake up". pretty much. 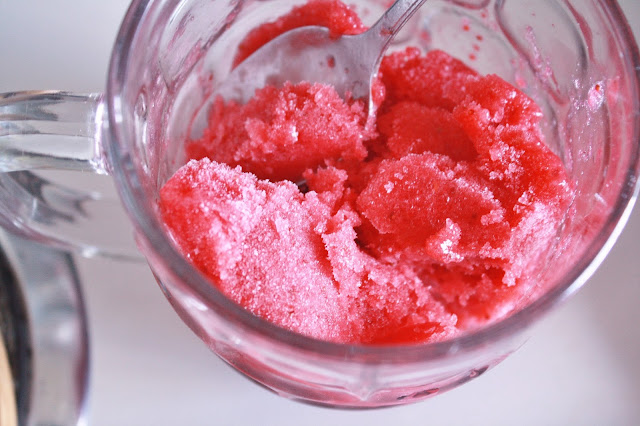 [apologies to all three of my regular readers for the un-planned, un-announced absence while i pondered the state of humanity. conclusion? not good. however, in the ongoing effort to post weekly, i will (attempt to) make up for the skipped entries over the next few (or several) days.]


i always joked that a deep-fryer would be the single worst gadget to have in-house. it is an open invitation to insanity of the worst kind. sure, you may start off with the usual things (assorted chicken parts, deconstructed potatoes, etc.), then you start tossing small pieces of bread into hot oil (because owning a deep-fryer is sure to spawn an intense fondness for freshly-made croutons on everything from salads to bowls of cereal), and before you know it, you are on the slippery slope to deep-fried double-chocolate brownie donuts. so, nope... no deep-fryers for me. we did, however, take the path of (slightly) less insanity and purchase an ice cream/sorbet maker. i had an ice cream maker back in my salad days, but i mostly used that to freeze Jello (sounds crazy, but make a pack of jello, skip the fridge, and process it in an ice cream maker for a yummy treat with a satiny-smooth texture). this time around, i wanted something a bit more grown up for the inaugural batch. behold... mango, cardamom, ginger sorbet!!! exactly! 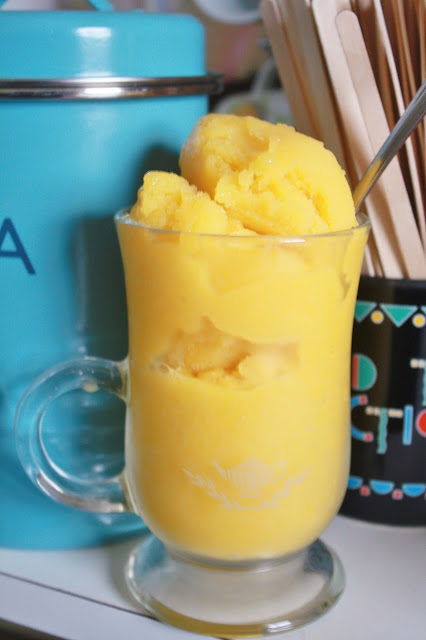 i tend to use brown sugar for every thing, but i decided (after much deliberation) to get some white sugar for this adventure, thus embarking on my own slippery slope. i made a stock solution of simple syrup (equal parts sugar and water) infused with some cardamom pods and a few slices of ginger (not pictured) 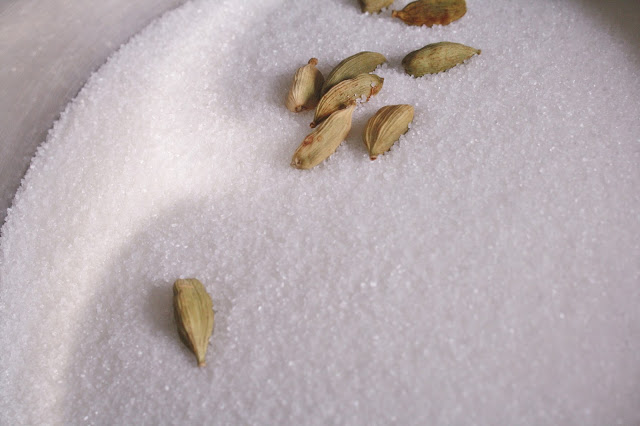 while the syrup cooled, i blended the flesh of three ripe mangoes along with some mango juice (it was actually a blend of mango, orange, and white grape juices, if you want to get technical). the resulting puree was very smooth, but i strained it for good measure, grated in a bit of lemon zest, then sweetened it to taste with the syrup, chilled the mixture, and processed it in the machine according the to manufacturer's instructions. the worst part is the wait. it only took about twenty minutes to get to the soft-serve stage in the machine, but you are instructed to transfer it to a storage container and place it in the freezer to complete the firming-up process. i admit to being a bit impatient, but my favorite animator was like a kid waiting to open gifts on Christmas morning. some hours later, we had sorbet. yay!!! 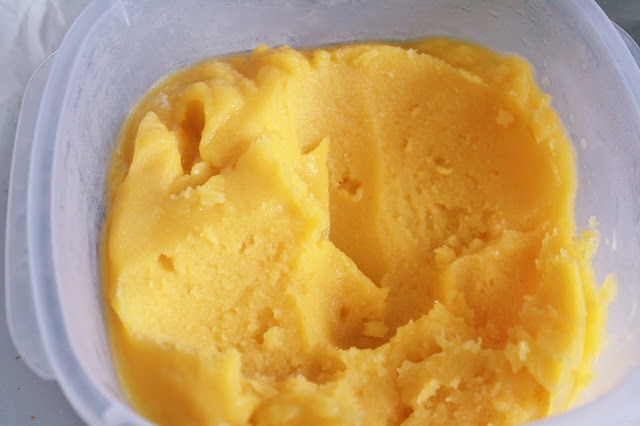 i had some right out of the freezer... 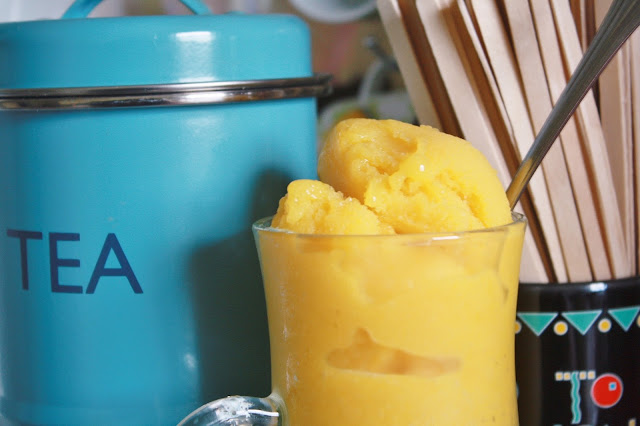 but he comes from a place i like to call Absurdia, so he waited until it got melty (his word, not mine) before diving in. 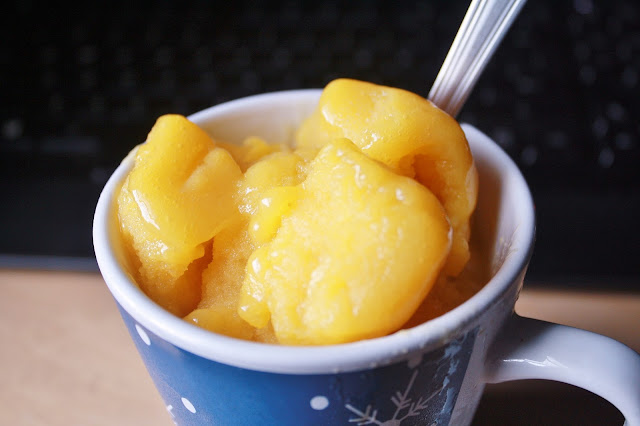 the verdict: so very good. i especially like that i can adjust the sweetness level to suit my own taste (as i tend to like things on the less-sweet side), and the flavorants added depth without overshadowing the natural goodness of the mango.

i already had plans for the next batch, so i grabbed some fresh mint, scrunched the leaves in my hand to facilitate maximum flavor release, and added it to the remaining ginger-cardamom syrup. 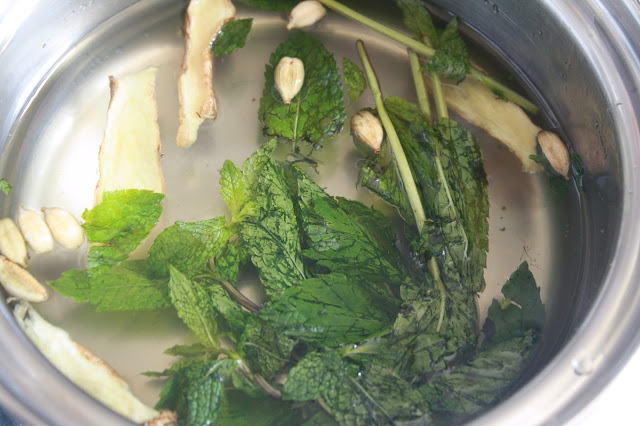 i transferred the whole thing to a container (actually, a recycled pasta sauce jar that had been thoroughly washed and sterilized in boiling water, if you want to get technical) with the intention of keeping it in the fridge until i was ready for the next run.... which turned out to be the very next day. 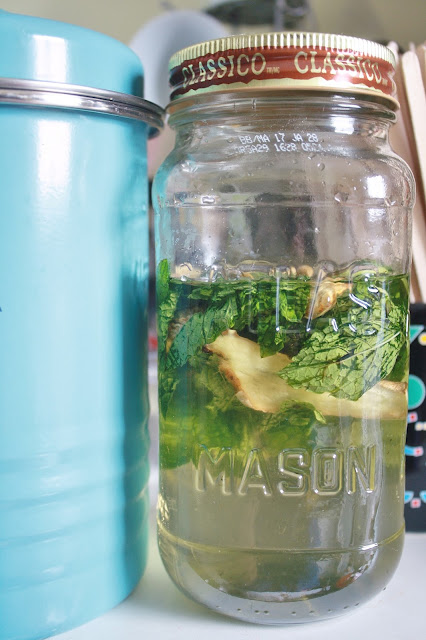 hopefully i will remember to take a photo or two of the berry minty lemon sorbet before it is all gone, and i am already envisioning an ice cream adventure that involves coconut milk, fresh cherries... and a super-hot oven!!! what could possibly go wrong?