dragons can be quirky....


i woke up this morning and pulled open the curtains, only to confirm that we were at the start of yet another week of cold, grey, overcast misery. then something amazing happened, and i do not mean the cup of coffee that i actually remembered (for once) to drink before it went cold.

me: there is a big, fat bumblebee with his head shoved down the mouth of a snapdragon. i am smiling very hard.
him: nice.

the snapdragon is one of the few flowering plants that i usually do not mind tucking into the empty nooks of a vegetable garden. zinnias and bunching sunflowers—the kind with clusters of small flower heads that can be used as cut-flowers—also share the rare distinction of being endorsed by me. in fact, there is a variety of sunflowers called "velvet queen" that ranks incredibly high on my list of favorite things. trust me... things have zero value until they land on said list.

where was i again? oh, yes... snapdragons.

not only are they pleasant to look at, these flowers are also an excellent source of pollen for the bee population, hence the early-morning visit on this waiting-to-rain kind of day. that spray of yellow dust is pollen, which means that the bumblebee probably paid this flower a visit while i was still fast asleep. 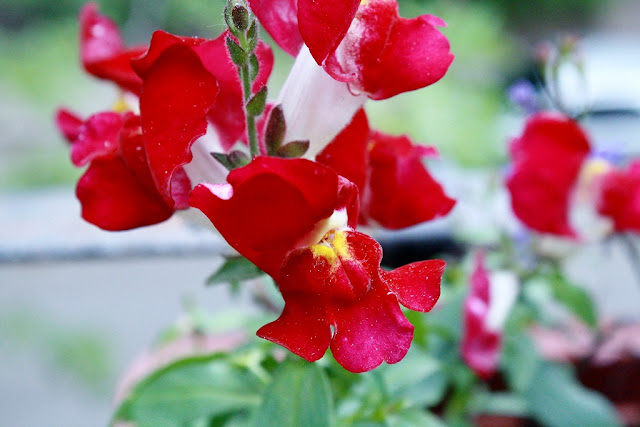 snapdragons are a common sight in Summer gardens, mainly because they are such an attractive and interesting plant. they are also super-easy to care for, and extremely low-maintenance. it is the perfect accent plant for the lazy human being.

the flowers come in almost every color, except blue... because that would make me too happy. they grow clustered in stalks and the flowers open in succession from the base the tip. this variety has rather short stalks—laugh if you must—but you can see that the flowers at the bottom of the cluster are already withering, while the ones at the top look freshly-opened. 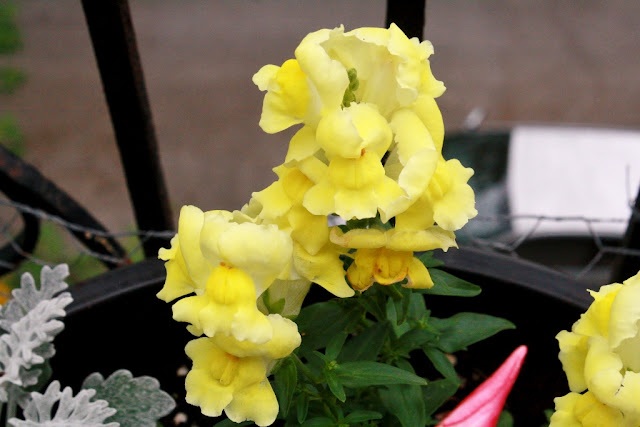 [random aside: you see the same pattern of blooming in the gladiolas that florists try to sneak into every floral arrangement ever made. i am convinced that the tradition of the dozen roses was started by someone who was trying to convince a florist to put down the gladiola for Pete's sake.]

snapdragons earn their names from two things... their appearance and a peculiar quirk that they share. bet you never knew that dragons can be quirky.

the flowers bear a resemblance to a dragon's head. yes, i know... the dragons probably look a bit different where you live. check out that profile. it definitely looks dragon-ish. 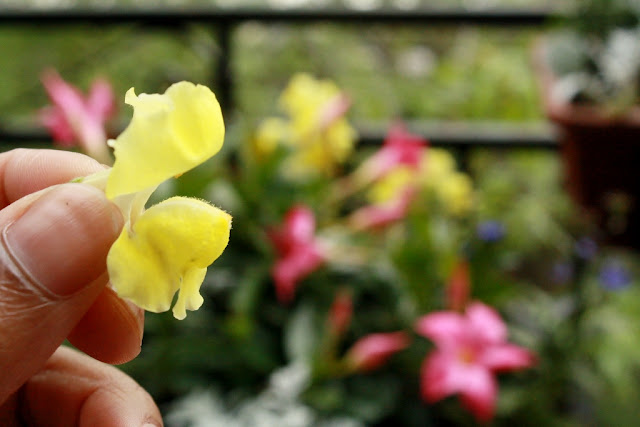 as for the other part... when you place a finger on either side of the flower and press lightly—as though you were squeezing someone's face by their cheeks—the center of the flower pops open to reveal the mighty "mouth" of this ferocious beast. i especially like the way this looks with the darker-colored flowers where the pollen-coated inner bits (yes... i do know they are called stamen) look like teeth. admit it... you are shivering with fear. 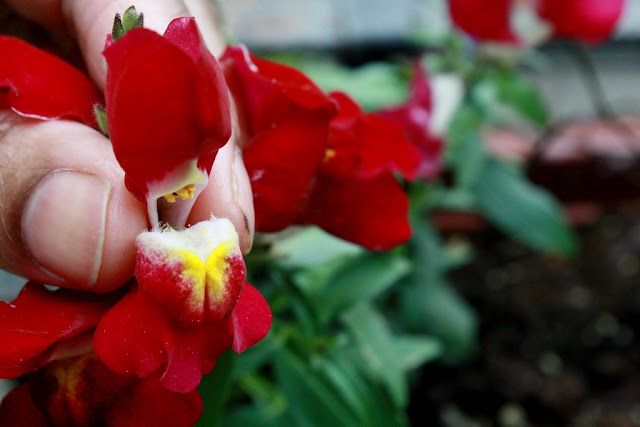 methinks this dragon needs a tube of toothpaste.

where is the snap, you ask? just squeeze to open... 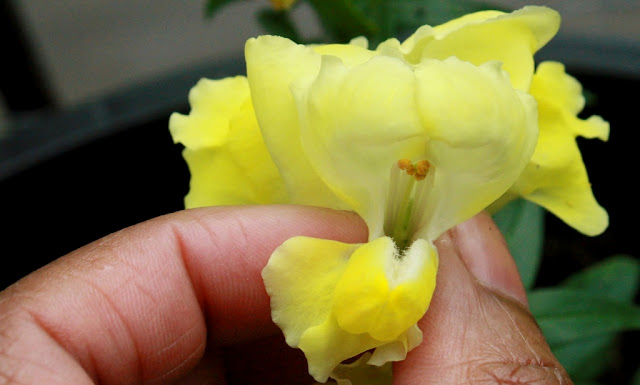 and when you release the flower, it snaps shut again. SNAP!!! 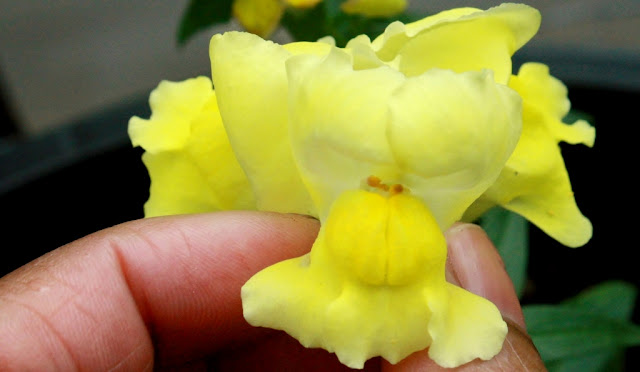 think of it as a cheap magic trick with Mother Nature providing the only prop you will need. yes.... i am easily amused. most of all, it amuses me to know that the bees have already found my garden, so they should be around when my tomatoes and peppers start flowering... which will happen if the sun ever shines again.

then my mind started wandering, which is always a dangerous thing.

me: when we get through the Marvel movies, can we watch the Transformers movies next? i love that cartoon.
him: the Michael Bay ones? no way. they are an atrocity.
me: come on. i want to watch Bumblebee—which he did not direct—but OCD requires me to watch the rest of them first.
him: we can try, but i bet you give up halfway through the first one.
me: that is why beer was invented.
him: uh huh.

so now i will be subjecting us both to a series of bad movies, all because of one pollen-plundering bumblebee. luckily, i have set myself on a beer-sampling adventure, so that should provide any necessary buffer on those bad-movie evenings... but i will talk about that bit of absurdity some other day.

** i am editing this to add that we ended up watching Transformers later in the day. it was disappointing, but that is usually the case when revisiting the happy things we remember from our childhood. best part was, i got through it without resorting to beer. we did, however, have to pause a whole lot to engage in mini-rants about things we found infuriating (seriously... what reason would the military guys have for putting their trust in the Autobots when their only experience with the Transformers involved them nearly getting killed in the middle of the desert? and how do you have the main bad guy show up with like forty minutes left to go in a move that was almost two-and-a-half hours long???). the cats slept on undisturbed through the whole thing, as they are used to that kind of nonsense from us. a good time was had by all.**

what is the point...

after what was without doubt one of the most soul-draining Winters of my life, i was really looking forward to the arrival of Spring. it seems to finally be here.

him: uhm... Spring happened like two months ago.
me: that is adorable.

then i just shake my head in pity that he thinks this is what Spring is meant to feel like.

still, while it has been mostly chilly, wet, and grey with hardly a trace of sunlight to distinguish night from day, the temperature has remained above freezing for a few weeks now. i think it is safe to call this season Spring.

i am not abandoning my warm blanket just yet though, especially not with an "aggressive cold front" in the forecast. and, no... i have no idea what makes a cold front "aggressive", but that sounds like a meteorologically-polite way of warning us that it will feel like "not quite Spring".

this is the time of year when my fancy usually turns to thoughts of gardening. we are going to try something a bit different this time around. there is only so much space to be had when your garden consists of however many containers of soil you can squeeze onto a (moderately-sized) balcony. as a result, for every new thing you add to said space, you have to abandon all plans of growing some other thing.

i usually scoff at the idea of growing flowers. you know... all those brightly colored plants that serve no purpose other than to be pretty and to bring joy. yuck! however, i allowed myself to be talked into giving it a try for this year's balcony garden project. so, off we went to the garden center, and home we came with an assortment of pretty, colorful things. 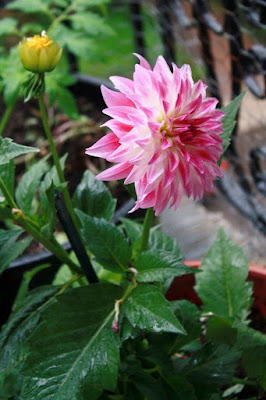 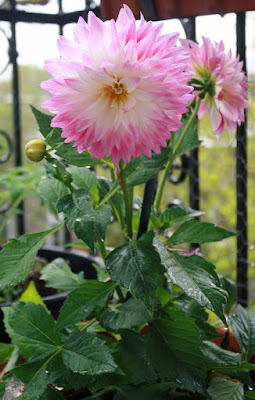 it is called a dahlia, and it is beautiful. now, i ask you... what is the point of such a useless thing? 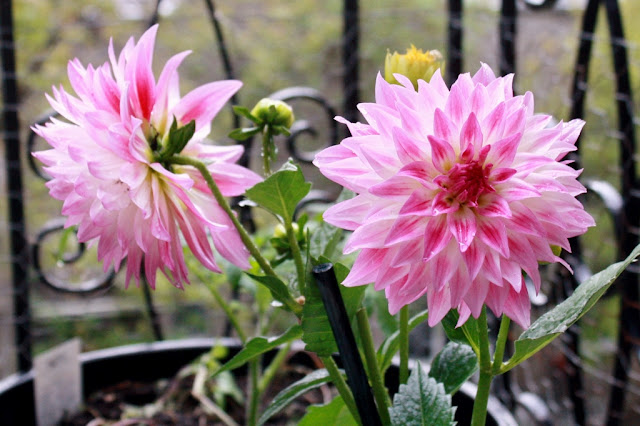 we also picked up a variety of small annuals, which i planted in a couple of the troughs on the railing. the troughs are mostly symmetrical, except one has red snapdragons... 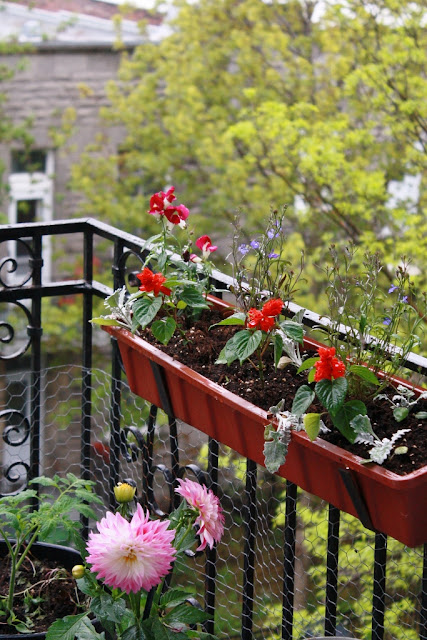 and the other one has yellow snapdragons. OCD may require me to run out in the middle of the night and remedy this kinda sorta but not quite symmetry. 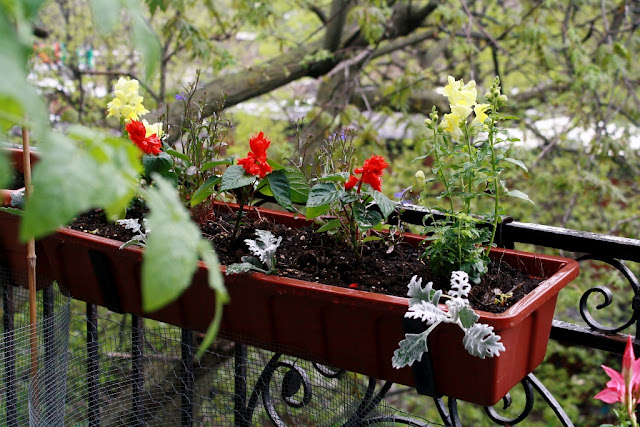 there are also flowers in one of the ten-gallon containers that would otherwise be holding edible things. i expect them to explode into a lovely display of color... should we ever get anything resembling actual sunshine. 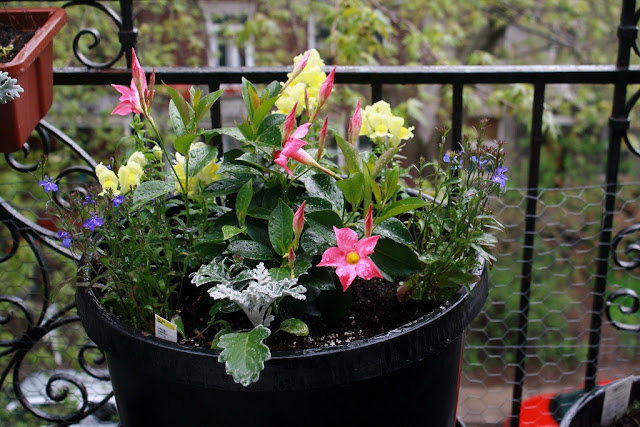 i did manage to squeeze in a few tasty things for future culinary adventures. so far, we have three types of tomatoes, two types of peppers, and an assortment of herbs.

oh... and i also bought a few strawberry plants which i will add to the remaining trough before the end of the day. strawberries usually do pretty well in containers, and i look forward to the dramatic effect of them hanging from the railing. naturally, there will be many frustrated reports of damage-by-squirrels in the coming weeks.

[i transplanted the strawberries and grabbed a few pictures before pressing the "publish" button, so i will insert them in here for your viewing pleasure.] 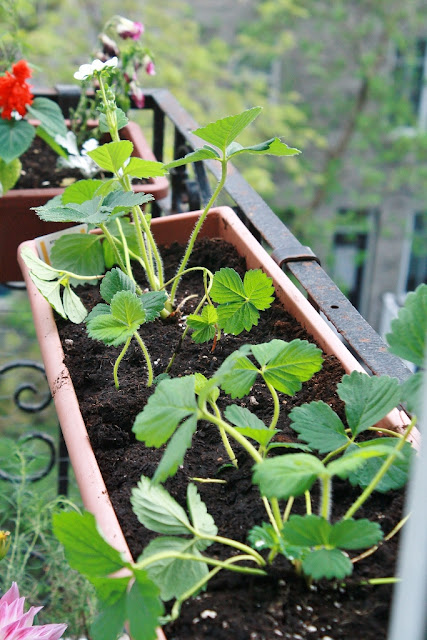 if you look at the center of a strawberry flower, you will see the start of a tiny strawberry. i call it... future strawberry. 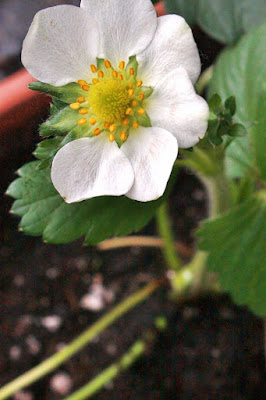 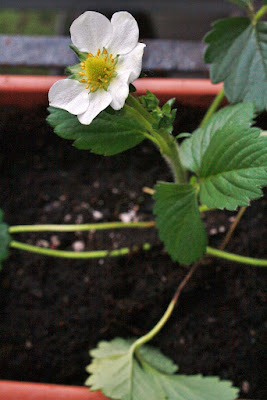 while i do feel a touch of sorrow at having lost the rest of my precious... precious... garden space to pretty, flowering things, we do have a few indoor plant adventures planned for the near future. that should keep me distracted for a while. then there is the furniture to be reupholstered... teaching him to sew... and a couple rooms that (still) need to be painted.

this would be a good time to sit back, have a sip of my coffee, and look out at the pretty, useless things. i can get used to this.
Posted by n.ayisha 5 comments: