where no sheep has gone before...

i stumbled out of bed at around four o'clock in the morning, made my way to the kitchen, filled the kettle, grabbed the nearest passing cat, and headed for the window.  it's so worth living with insomnia if it allows me to be present when Venus makes her majestic climb across the pre-dawn sky, laying the path for the later-rising Sun. the dot of light grows brighter with each day, inspiring a feeling of immense awe (once you get past the initial dread that it might be some extra-planetary object headed directly at your kitchen window). it's one of those moments that leaves you feeling insignificant against the backdrop of the cosmos and thankful for the experience.

prolonged sleep deprivation has a tendency to resemble inebriation. at least, that's the way it usually plays out in my life. having spent the past five or six days with a few hours (at most) of sleep each night, it's fair to say that i'm not all there...not that anyone had ever accused me of such a thing. i don't mean the big things,—like not being in the right state of mind to drive a car or operate heavy machinery—but i wouldn't trust myself to butter toast with a plastic knife in this condition. it would not end well. this feeling of total disorientation has only been made worse by the recent time adjustment and the corresponding shift in daylight hours.  the sun has moved to a lower position in the sky, and dusk suddenly seems to follow hard on the heels of the dawn, leaving me with the realization that the only thing worse than sleeplessness is sleeplessness when there seems to be so very much night.

we spent the middle part of the day wandering around the neighborhood, running a few quick chores and stopping for a leisurely lunch at the amazing new(ish) gourmet burger joint down the street. i even had the wholly uncharacteristic experience of going into my favorite yarn shop and walking out without buying a single thing. madness, i know, but i was in search of a pattern that seems near impossible to locate, so we returned home and i immediately set about finding a replacement pattern if i expect to get anything knitted by Christmas.  that's when things started to get crazy.

let me preface this by saying that i've been passing a lot of my time lately (re)watching Star Trek: The Next Generation. in my defense... it's not my fault.  my favorite animator challenged me to take a few weeks away from what he likes to call rape and murder television, which pretty much left me with nothing else to watch (and i wonder why i can't sleep at night). i consulted the long list of shows i hope to revisit at some point in time, and this one just jumped out at me. why, you ask? why not, i reply!  don't get me wrong.  i watched the show during its original run, but i've probably only seen about half of the episodes, as i was far too cool in those days to be a die-hard fan. no, seriously, i was. but, back to the story.

there i was, searching on Ravelry for a scarf pattern i'd encountered some months ago (i couldn't recall the name of the pattern, or the designer, or the magazine), when i came across this. it's a bat'leth. a knitted bat'leth. a knitted bat'leth scarf. my favorite animator and i were falling off the couch laughing at this point. that's when i exclaimed, "i can't believe thirty people actually knitted it". we laughed some more, he headed back into the studio to work, and i grabbed my wheel and returned to the fiber i'd started spinning earlier in the day. 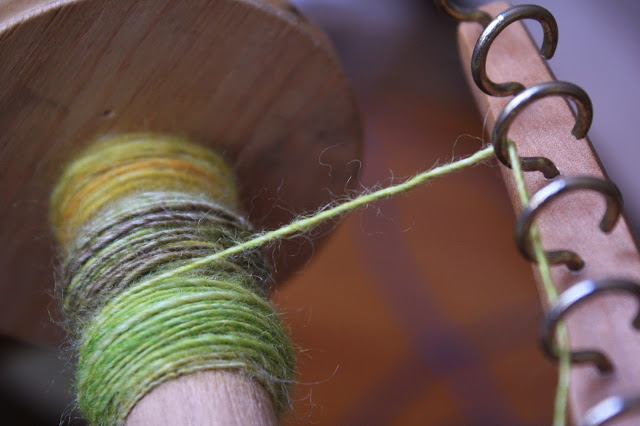 i hit play on some random You-Tube-recommended podcast and spent the next ten minutes realizing how little i cared about whatever they were talking about, so it seemed as good a time as any to  watch the next episode of TNG. that's the point where things went completely bizarre.

let me just say that i am usually only kinda paying attention to whatever i may be watching when i'm at my wheel, so i was more than a bit startled when i thought i heard the words "spinning wheels" in the distinct voice of one Captain Jean-Luc Picard. what??? the spinning ground to an abrupt halt as i reached over to hit rewind, and there it was again.  "fifty spinning wheels". he was reading the cargo list of a ship that'd left Earth two hundred years prior, and the gear on board included fifty spinning wheels. what??? then Data chimes in with "spinning wheel... a device used for spinning yarn or thread which consists of a large hand or foot driven wheel". what??? so, i took a minute to compose myself and returned to my spinning and my show, my attention equally divided between the two at this point. a few minutes go by, and they beam a bunch of people up to the Enterprise, and the newcomers bring with them several chickens, a goat... and a sheep! a sheep covered in lovely, fluffy fleece... on the ####ing Enterprise! but wait, it gets crazier. a few more minutes go by, and Picard's talking to the refugees in the cargo bay, and behind him there's a couple spinning wheels. then the camera angle changes and there's another spinning wheel in the far corner and next to it, there's a great wheel (one of the really tall, old-fashioned wheels you use while standing up). WHAT???

at this point, i had to get my favorite animator to verify all of this insanity, as there was the distinct possibility that i could be hallucinating from a lack of sleep. there was also a woman among the refugees wearing an obviously hand-knit sweater. i hit pause and started studying the arrangement of cables and bobbles as my favorite animator smiled in amusement.  [i have been known to follow strangers around in order to get a closer look at their knitwear]. "you should write up a pattern for something like that", he said. "who would want to knit such a thing", i replied. "well", he said, "i know where you can find thirty people who'd get a kick out of it".
Posted by n.ayisha No comments: