[full disclosure: i do not handle stress particularly well.] so, here i am—two days deep into trying to figure out why my laptop is refusing to work properly—and i am very most definitely feeling just a tiny bit stressed. this, naturally, means that i am constantly having to remind myself that it would be very most definitely counterproductive to grab a hammer and just be done with the thing, and i have been warned that it will not be replaced if i succumb to the impulse to toss it through the nearest (closed) window.

yep. that very most definitely does not work.

so, now i am taking a break, during which i will refill my teacup and attempt to add a row or two to the cardigan i am currently working on for him. 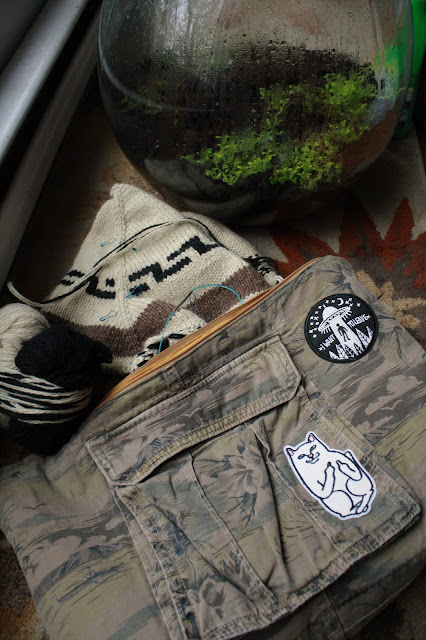 it is being housed at present in one of the project bags i made from an old pair of his shorts. i could add a few photos of the bag-making process... but that would require me to be able to get my computer to start. and it is pictured here in front of a work-in-progress terrarium, the making of which i could (also) show in a few photos... but that would (also) require me to be able to....

yep. there goes the headache again. i am going to take a couple-few tablets and go pet a cat.

i sincerely hope no one gets the wrong idea, but i have a habit of humming... a lot! this does not by any means suggest that i am some sort of happy, chipper person. that brand of nonsense was not included in my programming, so rest assured that i am still the same pessimistic curmudgeon you have come to know and (hopefully) not form any sort of emotional attachment to... because that would risk violating my "avoid emotional attachment" rule. yes... i do have some problems.

where was i again?

oh, yes... so, i find myself humming a lot. all sorts of stuff. classical music, jazz, or the soundtrack of my coming of age. the nineties really was a depressing time in which to find onesself trying to make sense of your place in the world... but i am digressing again. what i end up humming, most of all, is the older-than-me stuff they used to play 'back in the day' on Lite FM in NYC.

i had (and sill have) a deep hatred for being dragged out of sleep by a blaring alarm, so i got into the habit of setting my alarm clock radio to play the local news station for a short while before the noisy bit... but that still left me wanting to toss the thing out the window most days. however, after much trial-and-error, i eventually devised the perfect formula for being awoken so gradually, that i would not start most days in an already-foul mood.

first there would be the (very-non-jarring) sounds of Lite FM for thirty minutes. is there anything more soothing than being practically whispered awake by the likes of Cat Stevens?  that would be followed by fifteen (potentially disturbing) minutes of local news... and THEN it would alarm, by which time i was usually (mostly) awake.

this meant that i started most days with a soundtrack of music that was (mostly) older than me. now—a couple (or so) decades later—i still have all of that... stuff... buried in my subconscious, and it always seems to come tumbling out with the slightest provocation. it could be a passing phrase that someone says or some other wholly insignificant thread of a connection that my subconscious latches on to, and just like that... you can hear the proverbial record-needle drop as the song begins to play in the back of my mind. and, without realizing it, i would be humming that song on repeat, sometimes for hours at a time.

i began the morning, standing shivering out on the balcony on what promised to be a crisp, cool Autumn day here in Montreal. what prompted said action, you ask? i had just drawn open the drapes to find a bright, nearly-full moon still in full view despite the sun having risen more than an hour prior.

i grabbed my camera and stepped outside just in time to get a decent shot. 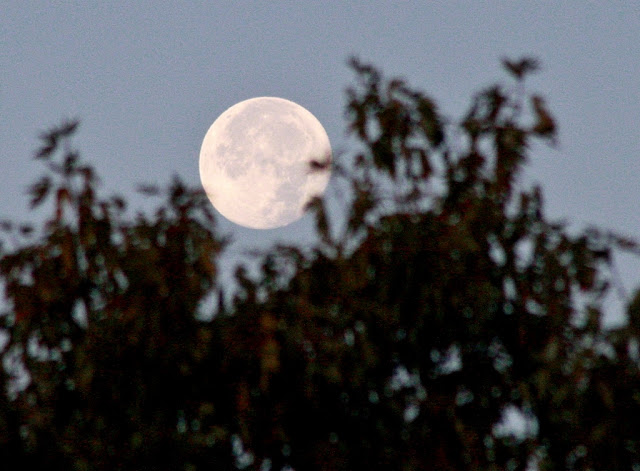 then i just stood there for a while, watching it slip away behind the treetop while i recalled the days when i wanted to be an astronaut. unfortunately, that part did not last too long, as the brisk morning chill finally got the best of me, clothed as i was in a tank top and pajama pants. so i was forced to (once again) abandon that lovely dream.

what does any of this have to do with deceptively-cheerful humming, you ask?

well, it is now the opposite end of that day, and the moon will ascend into the sky any minute now, and i find myself still  humming the older-than-me song that i have been humming all day.

"can i just have one more moondance with you, my love..."

worst part is, i think the Universe was conspiring to make sure this song got cemented in my head today. following the near-frigid photo-taking, i sat down in front of my computer with my morning cup of coffee. this is when i made the mistake of checking out the newest patterns posted on Ravelry, and there it was at the top of the 'new to Ravelry' page... a (free) pattern for intensely cute fingerless mitts called... wait for it... Sweet Moon! get out of my head, Universe!

but the best bit was yet to come...

he came home to find me sitting cross-legged on my favorite sofa in the dark with that song playing on repeat on my laptop. i had just finished putting together this post (minus this bit, obviously), and i was explaining it to him in a most excited tone that was fueled by a combination of too much coffee and too little sleep.

now, there is nothing remarkable about my having composed a new post, except that i have done so at least a few times of late, but i cannot seem to muster the enthusiasm to hit the "publish" button, a fact which i blame for the most part on my ever-increasing lack of faith in humanity... but i am tangenting again. point is... this one was done, and i fully intended to actually post it. this is when it got a bit strange.

him: i see. so you're in your 'moondance mood' again.
me: what are you talking about? what mood?
him: this one... where you listen to that song on repeat all day, and you walk around singing it and dancing and being all crazy.
me: that has never happened.
him: oh, yes it does... regularly.
me: what???
him: yeh... like once every few years. you talk about how much you love this song, and how they used to always play it on that radio station that played all the old music in Brooklyn, and you get all nostalgic and crazy.
me: that has never happened.
him: yes, it has. regularly... every few years.

so now i guess i will be putting together a near-identical post a few years from now... not that i expect you to stick around for that long or anything, because... well... that would definitely be a violation of all my rules.