i was attacked by a pigeon, and i am happy for the experience, as it removed some concern i was having that i might be losing my mind. let me paint you a picture, starting with the deepest, darkest part of the night.

my rocky relationship with sleep is one of the topics in the treasure chest, so i will get back to that in due time. suffice it to say, i decided to try something a little different for a change last night. that being, sleeping like a relatively normal human being in the actual night-time part of the night. and it worked! i was fast asleep shortly after midnight... and awake again by four AM. well, at least i tried.

our life here looks like a nature documentary some days. it is positively Attenborough-esque at moments. not only is there the ongoing clash of the species between us (mostly him) and the squirrels, but there was that time i called the cops to report a potential attempted breaking-and-entering (which turned out to be the work of a lunatic raccoon. then there was the bat that got trapped in our apartment, and the (many times) i had serious Hitchcock-inspired minor panic attacks while gazing out at a thousand (or so) crows at a time coming to a rest in the canopy of the big maple. it is funny now, but the feeling that Nature is out to get me seems to have multiplied since we moved up here.

so, there i was early this morning, sitting on my favorite sofa, laptop on the small table in front of me, taking the occasional sip from my large iced coffee, when i found myself suddenly overcome by the all too familiar "might be losing my mind" feeling.

it was a quick flash of motion, and the distinct shape of a large-ish bird dropping in rapidly from the sky and coming to a rest amidst my little balcony garden... which, by the way, is the randomly-selected topic of today's post. at least, it was... until the pigeon attack. 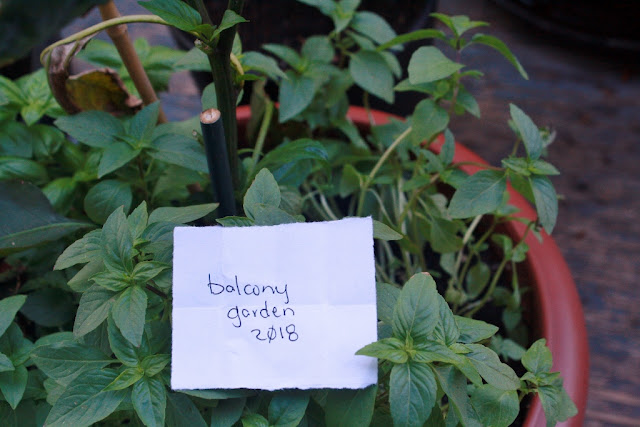 i went to the wall-of-glass (a.k.a., the ten foot wide double sliding glass doors), and i just stood there... looking. this is the view of the south end of the balcony from said position. 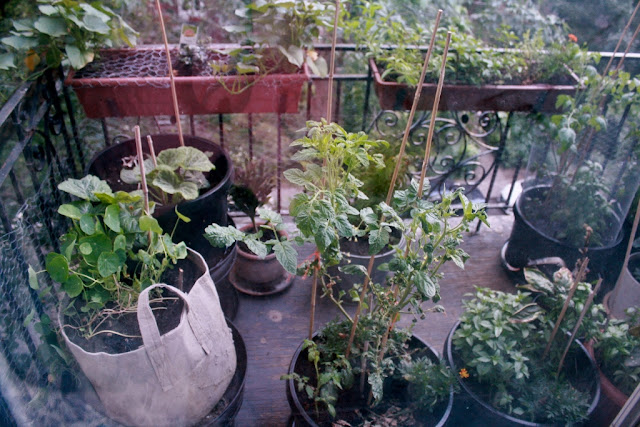 i craned my neck in every possibly position, yet there was... nothing.

so, i returned to my seat, thoroughly confused, and continued to stare in that general direction, wondering if i was "seeing things".

me: [to myself] maybe it was just an extra-large leaf from the extra-large tree?
myself: [responding to me] no, because it was the distinct silhouette of a bird's body. plus, you even stuck your head out the door to have a look, and there was nothing there that could have fallen from the sky.
me: [to myself] then, maybe you are finally losing what's left of your mind.

i was a bit offended, so we did not speak much after that point.

then a short while later, i grabbed my camera to take a few quick snaps for today's post before the sun got too high in the sky. i slid open the door, and the Little One came racing from a different room to go outside with me. she usually spends all of the daylight hours out there, but that door has been closed for most of the past week on account of the heatwave, so she welcomes any brief foray into that magical space.

i was especially eager to get a picture of the rosemary, as it was the same one we purchased last Summer, which we kept indoors during the cold months. i have been wanting to repot this thing since we first got it, but it seems to be completely at home in that tacky plastic strawberry pot. 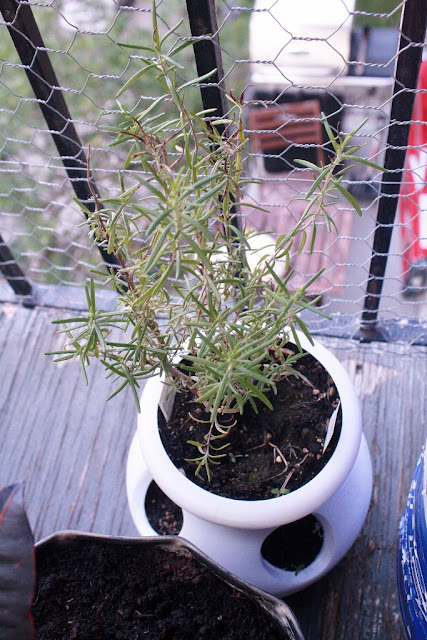 i had a really rough Winter, and i could not muster any of the enthusiasm i usually experience in the early over-planning stage of garden season, so we opted to go with transplants for everything this year. however, i found a few nasturtium seeds leftover from last year, and i popped them into a grow-bag. so this is the only plant i can claim to have (technically) started 'from seed'. 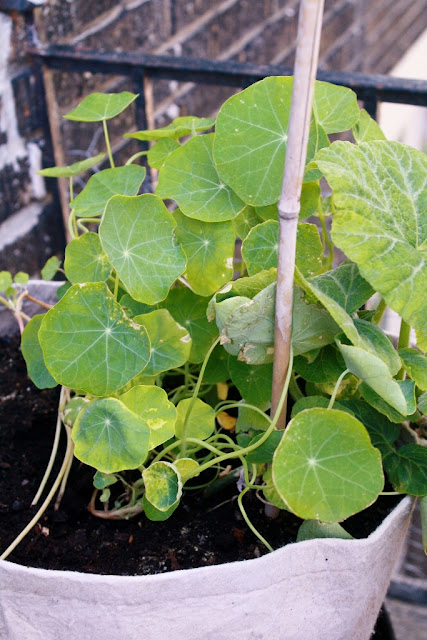 i always include a cluster of these plants in any garden, as the shape of leaves makes me think of parasols for the tiny mythical creatures that inhabit green spaces... just do not tell anyone that i made such a statement. i have a reputation to uphold, and talk of garden sprites and other such things just might get me banned for life from the International Society for the Advancement of Curmudgeony. 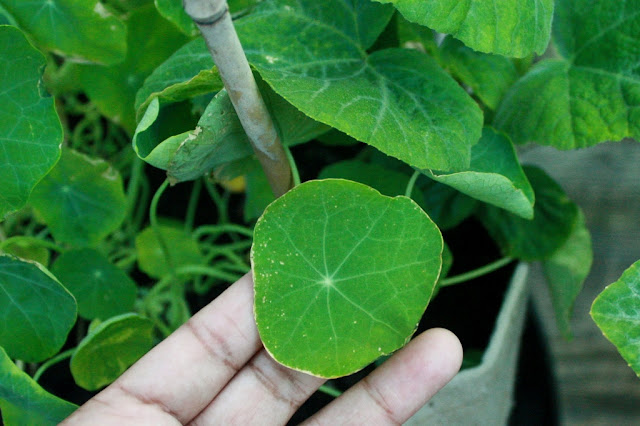 there were also the tomato plants, which were doing great when we first planted them. then the pre-heatwave cold-spell hit, and they took a bit of damage, but they seem to be bouncing back. this variety is Sweet 100, which is a cherry tomato. it is usually highly-productive, and this one has put on a ton of new flowers in the past few days alone, so i am looking forward to many little tomatoes this Summer. 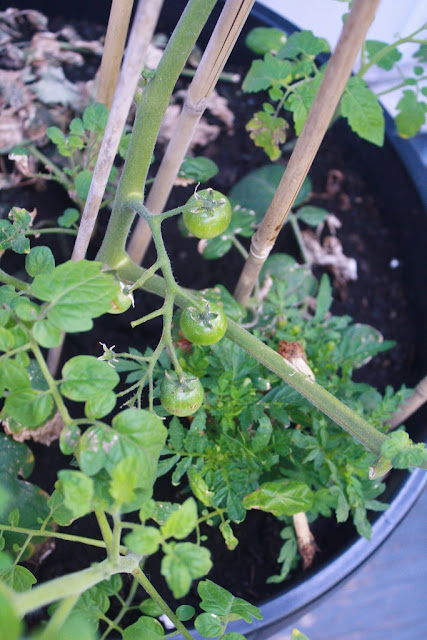 this one is Madame Marmande, which is a beefsteak variety that produces fruits up to ten ounces... each! this one is already almost the size of my palm. and the plant has developed lots of clusters of new buds in the last few days. 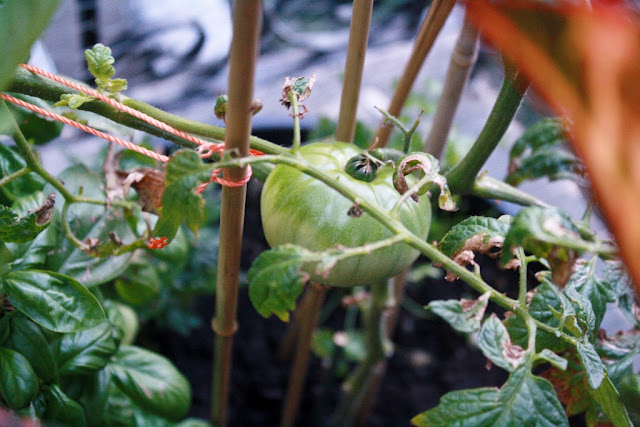 there is also a Grape Cluster tomato, which lives next to this lovely spray of Genovese basil. we squeezed some of this basil into a few pots, as i am a firm believer that 'it is not Summer without fresh pesto'. 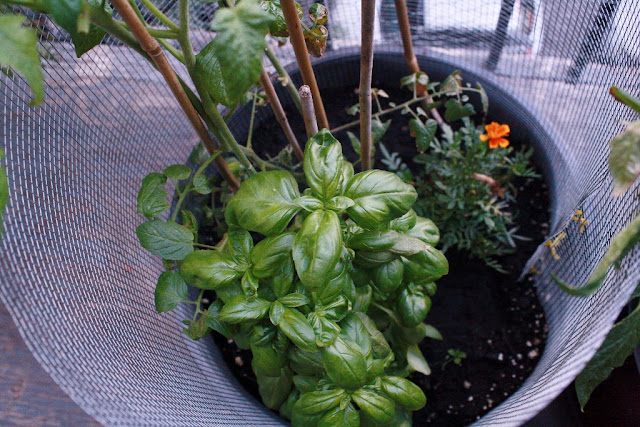 there is also plenty of Thai basil to inspire all sorts of colorful culinary adventures. i found a small pot of it in the produce section of the supermarket, which i divided and planted in two different locations to ensure that there is plenty of it to go around. it was seeded very densely, so i will thin the plants gradually and use the thinned bits for cooking. there may be a beef with pineapple, sweet pepper, and thai basil stir fry on tomorrow's dinner menu. 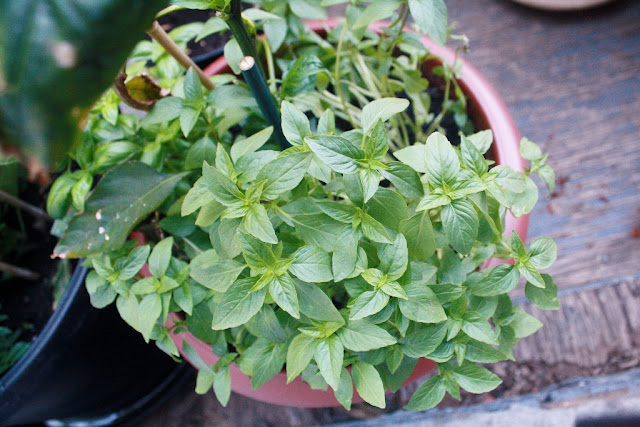 the pepper plants took the worst damage during the late-Spring cold-spell, but i am keeping my fingers crossed that they will recover. still, barring another microburst or some similar insanity, this may just be the best season yet for the Balcony Garden Project. 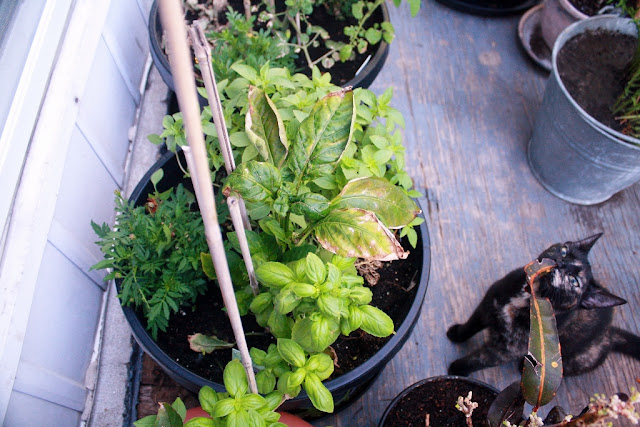 i then turned my attention to the last few plants at the far end of the balcony. i wanted to take some photos of the sweet potato plants, especially to show the lovely vines they put out, which is why they tend to be such popular additions to large potted arrangements. 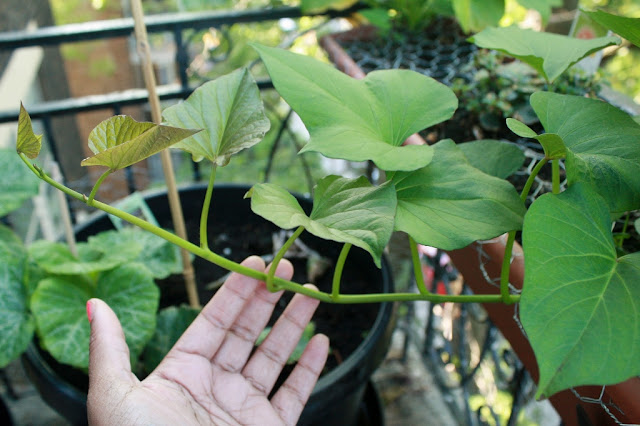 we had a couple sweet potatoes that were forgotten, and they eventually started to grow. it felt like such a waste to put them in the trash, so we buried one at either end of one of the troughs that are suspended from the balcony by means of some nifty iron braces his dad made for that purpose. if you ever come across a retiree with a garage full of building equipment, and an eagerness to put them to use at the slightest provocation... get as close to them as you possibly can without breaking any actual laws. 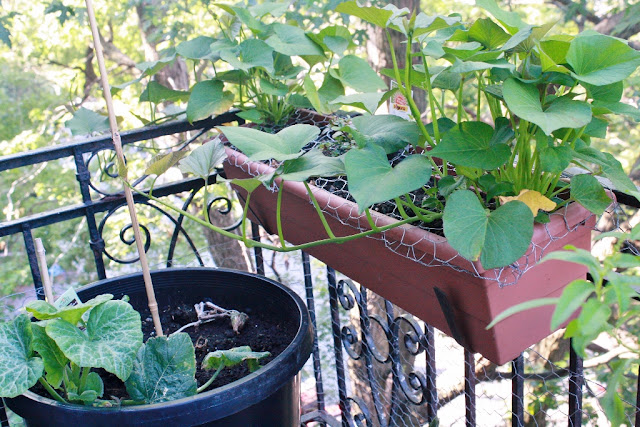 and, yes... we did wrap the top of the trough that contains the two sweet potatoes in a protective layer of chicken wire. i will give you one guess why. yep...squirrels. 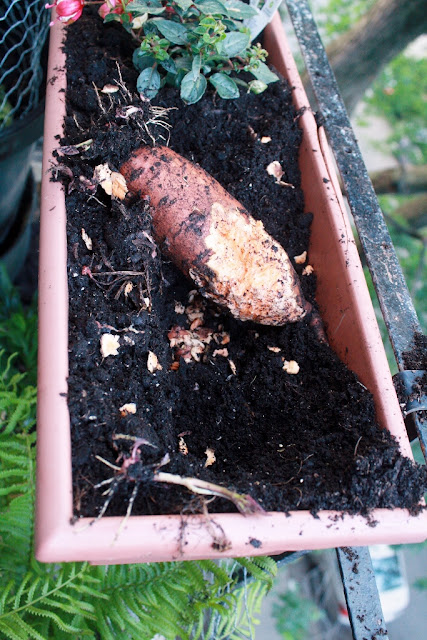 so, there i was... camera in one hand... delicate end of a sweet potato vine in the other... when the Little One brushed past my leg, headed in the direction of her favorite corner, behind the big container that houses one of the squash plants. [it also housed a couple cucumber plants... both of which died in the late-Spring cold spell. good times!]

the last two years' attempt at growing zucchinis ended in many blossoms (which were delicious), but no zukes, so we decided to give this variety of butternut squash a try, as it was labeled as being ideal for container gardening. 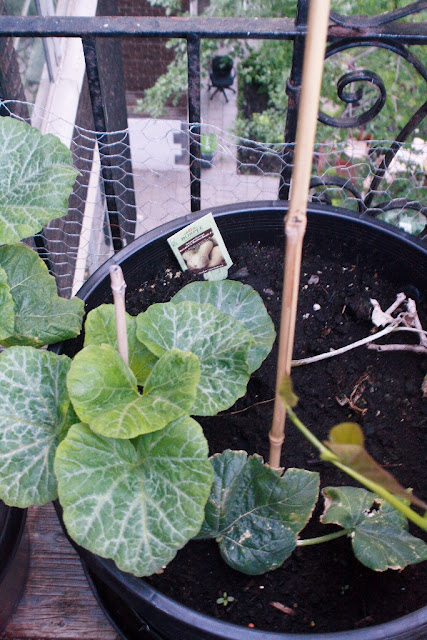 less than half a second later, there is this flurry of sound and action, and the cat that weighs all of about five pounds almost knocks me sideways in her haste to jump back inside.

i was not sure what was happening at this point, so i started to bend toward that corner to investigate (as that cat tends to be something of an over-energetic lunatic)... and that is when it happened!

it leapt out at me, feet first, wings flapping wildly, as though it intend to claw my eyes out while slapping me senseless at the same time.

now it should be noted that our balcony is not an especially large space. it is about ten feet by four feet. this is the South end (with a cat)... 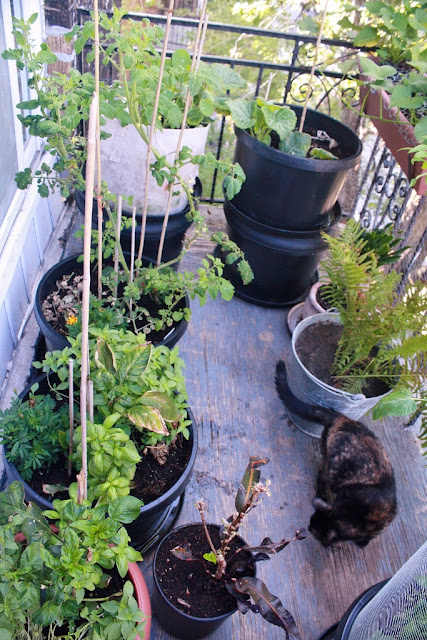 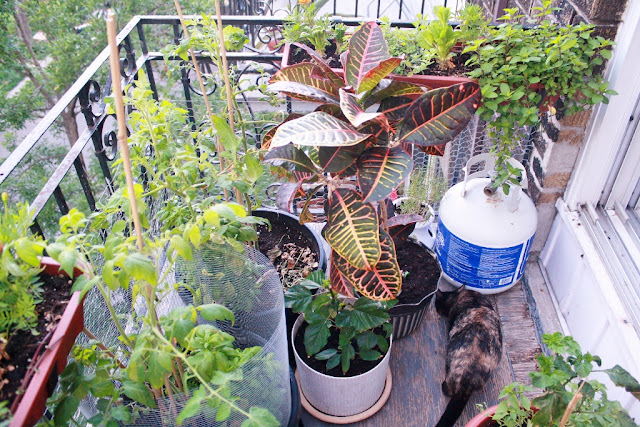 there is just enough room to squeeze through with a watering can, or for the cats to sprawl out and nap. it is a no-frills part of our home that is wholly dedicated to one express purpose... to house the Garden Balcony Project.

what it is not dedicated to is angry pigeons. and, while i recognize that i was not in any real danger—as i am fairly certain that i can take a pigeon in a fair fight—i was startled enough to scream and follow the cat in beating a hasty retreat back through the open door. that my camera did not end up in pieces down on the sidewalk is something of a miracle.

i attempted to take a photo of the hostile intruder, but it is near-impossible to convince a pigeon to stand still when (s)he is looking for a fight. just trust me... that is a pigeon, and it was engaging in extremely antisocial behavior. i guarantee you this bird does not get invited to a lot of parties. 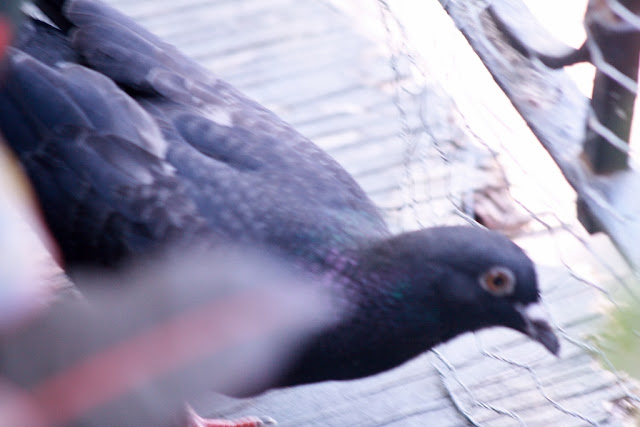 still, this attack was not nearly as bad as that time a plump became a gaggle, and we had to run from a park to save our lives. true story.

he and i were sitting on a bench, admiring the pond in front of us, including the plump of geese floating on the water near the opposite edge. they were accompanied by a small raft of ducks who, we later learned, ran recon missions for the geese.

the ducks paddled across to where we were, studied us briefly, then paddled back across the pond to the geese... who then started paddling over in our direction... flanked by the ducks. we figured they would stop when they got to the edge, but they climbed out of the the water, and kept coming. that is when the plump (geese on water) became a gaggle (geese on land). and, when it was apparent that they were intent on an attack, well... that is when we picked up our stuff and ran. he had to go back to get the handbag that i had left behind on the park bench in my haste to escape with my life.

so, while this morning's attack by pigeon was not nearly as potentially dangerous as the ambush by geese (and ducks), it was definitely equally hilarious. i mean, i did get attacked by a lunatic pigeon, but as least i know i am not losing my mind.