before i launch into the topic under discussion for today, i would like it noted —for the record—that i am definitely and unequivocally... so not a nerd. i even have a sign to prove it. 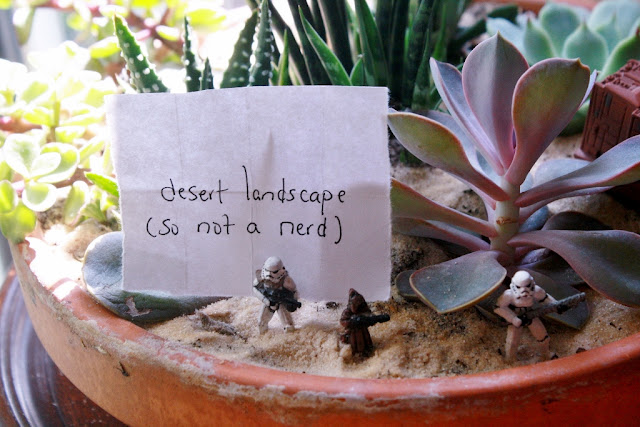 ignore whatever conflicting suggestions you may be getting from your own lying eyes, and just trust me when i say that i am absolutely... not a nerd. 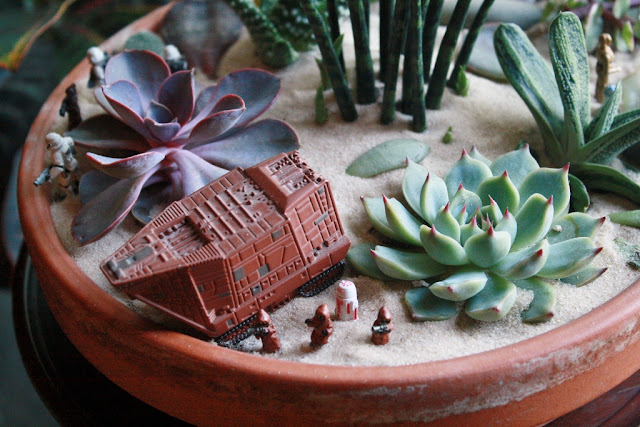 now that we have confirmed that bit, i can launch into talking about my recently-constructed mini desert landscape of non-nerdfulness. 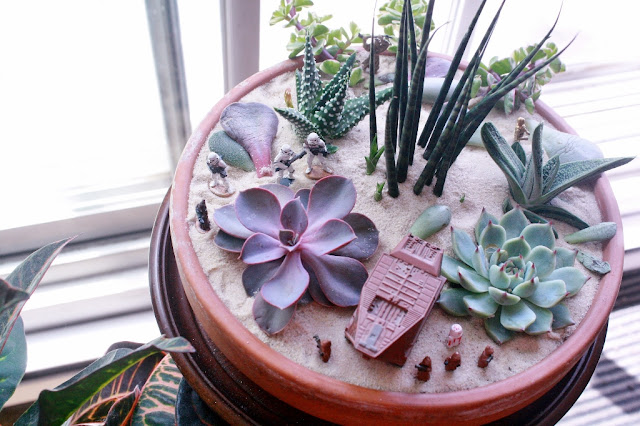 i went through a phase, back when i worked at the botanic garden, where i was obsessed with miniature plants. i took cuttings from different plants, sprouted them, and used the new little plants to create tiny gardens. whether it was  a desert in a bit of old pottery, or a tropical scene inside a cider jug (with an opening barely an inch across), i could not get enough.

as a result, every time i see those tiny desert plants—the ones in the Barbie-sized terracotta pots—my gardening fingers start itching. maybe it was time to scratch that particular itch. [that phrase never manages to sound quite right, does it?]

a mini arrangement can be as simple or as elaborate as you like. the only real "rule" is to select plants that have similar light, water, and soil condition needs. i decided to stick to non-cactus succulent plants, because... cats.

then it was just a matter of selecting plants that provided some variation in color, leaf shape, and height, as that adds "depth" to the arrangement. 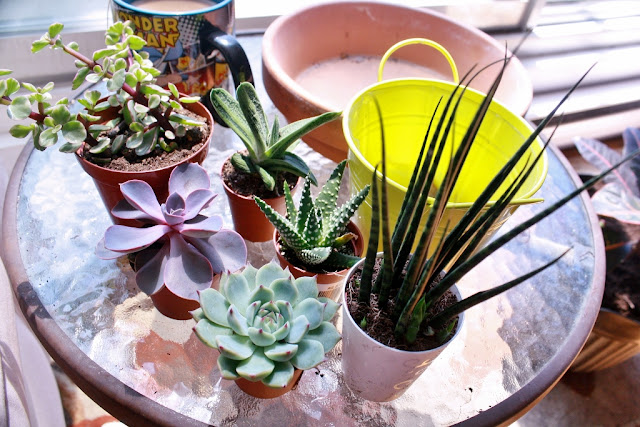 i will let you in on little secret of the plant world. if you ever see little leaves that have fallen from succulent plants... pick them up! i gathered up these bits from off the tables while i was choosing my plants. we will get back to that bit later. 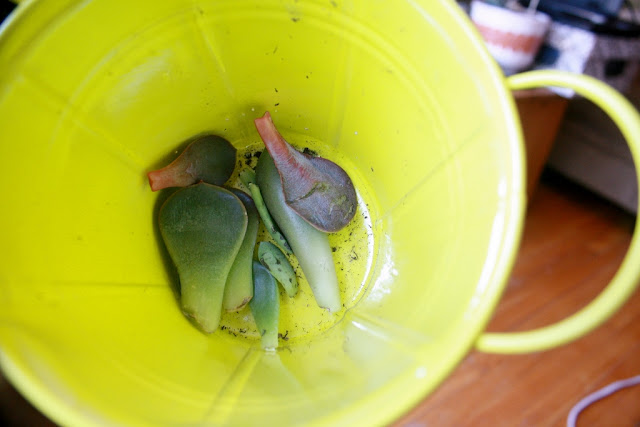 grab a suitable container... and a cup of tea... and you are ready to plant a mini garden. 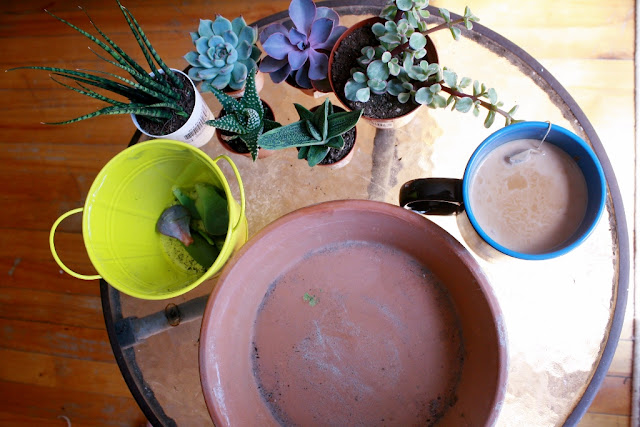 now comes the fun bit... deciding on an arrangement. 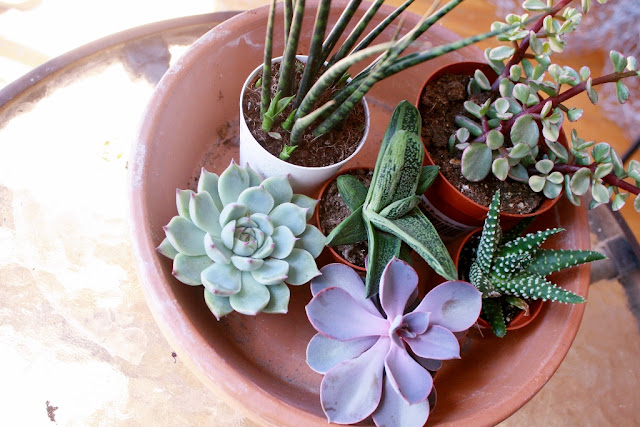 i finally settled on keeping the high-point in the center of the dish, so that there is no real "front" or "back" to the overall arrangement. 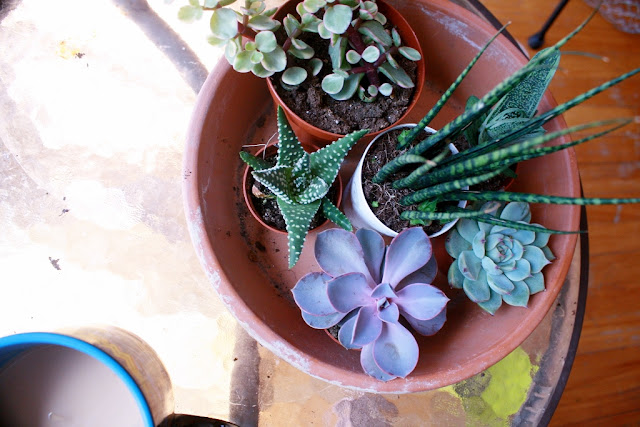 next comes the growing medium. succulents do not like a soil mixture that holds on to a lot of water, so i mixed roughly equal parts potting soil and sand for good drainage when the plants are watered.

i used a plastic bag for the soil-combination, as the next bit can be messy. add some water, twist the bag shut, and mix/massage the whole thing together to thoroughly dampen and combine the soil-sand mix. aim for something that behaves like wet sand. it can be molded, but it crumbles easily. 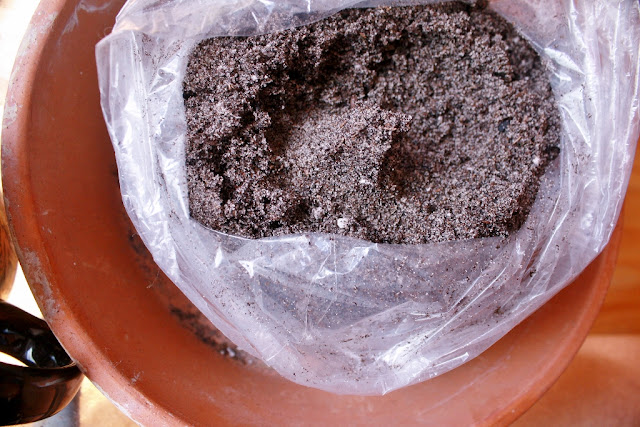 this is a terracotta saucer that was previously used for catching water below a plant. i filled it halfway, as the soil around the plant roots would add to the overall volume... plus i wanted to leave room for more sand. 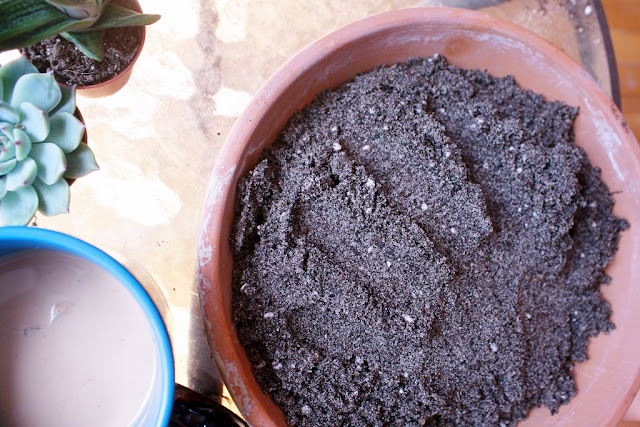 [i had to recruit and extra hand for this next part.] make a hole... 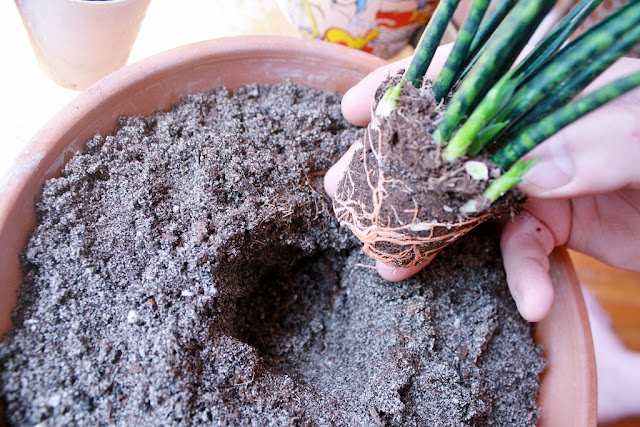 and drop in a plant. ta da! 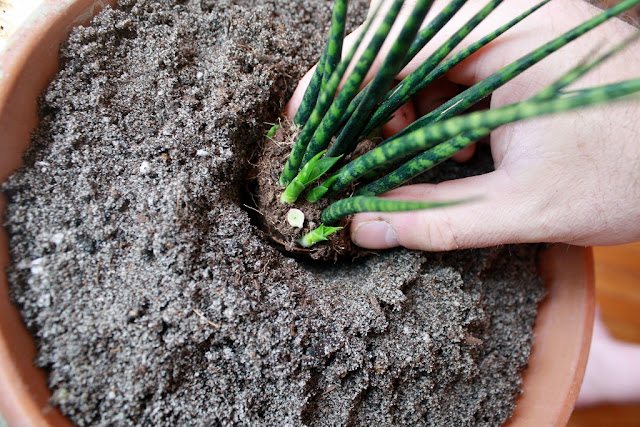 [note: i usually try to open up the roots a bit when repotting plants, but it really could not be bothered this time around. they will sort it out for themselves.]

continue in that manner, until everything is planted. 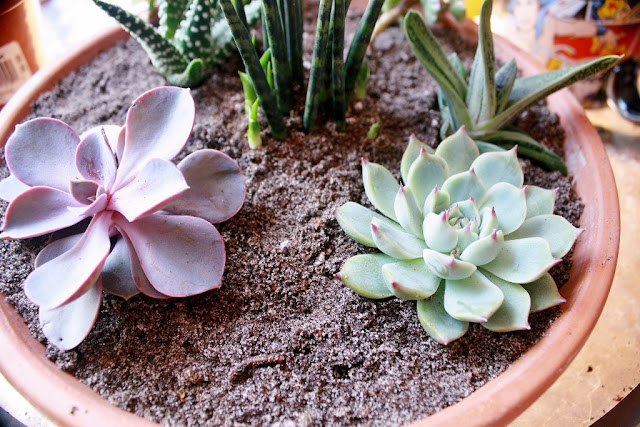 not bad. you could stop at this point... or not. 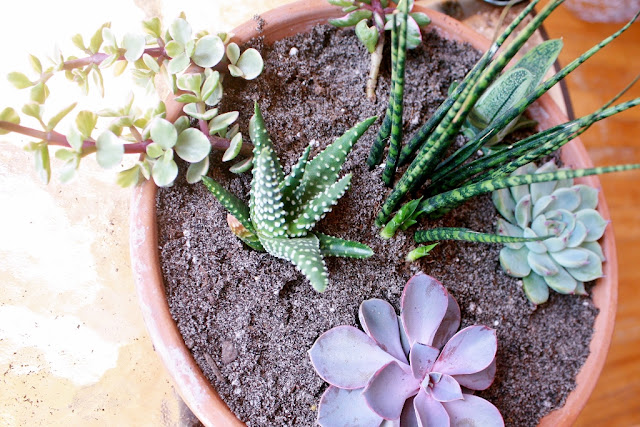 first, i gave the new mini garden its first official watering with a spray bottle. from this perspective, you can almost forget how small these plants really are. 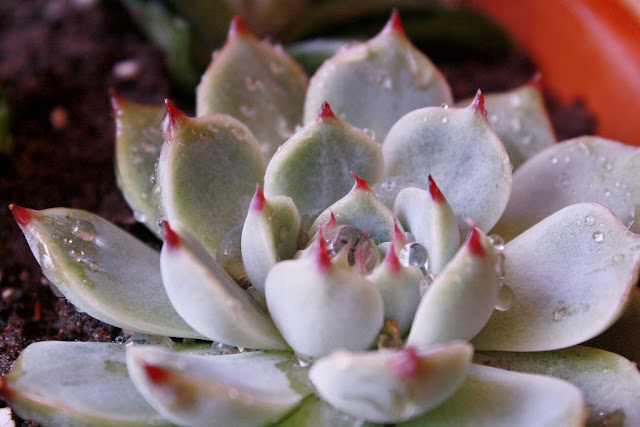 next came a layer of sand, as i really wanted to create something that looked like you just stumbled upon a mini oasis in the middle of a desert landscape. 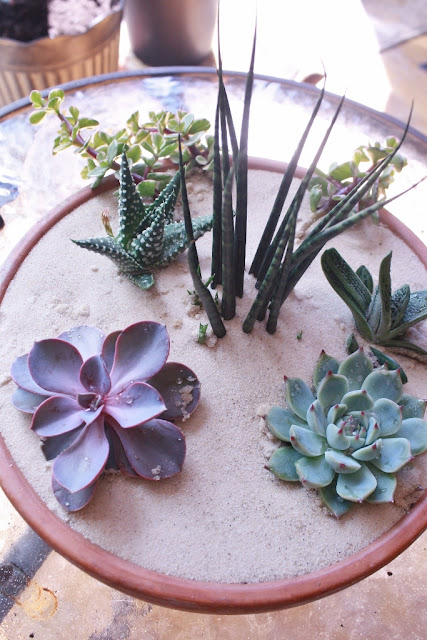 i also took the loose leaves i had collected, and placed each one on the surface of the sand with the "stem" end just barely pushed below the surface. 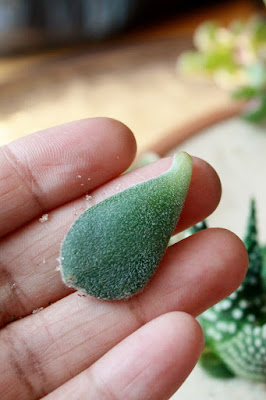 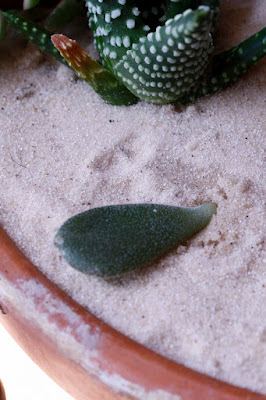 [here comes the big secret, so make sure you pay attention.]

those leaves? each one of them can become a new plant. i will prove that bit later. just trust me for now. 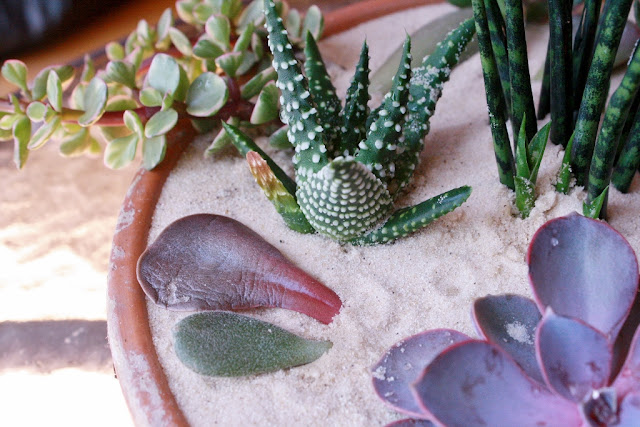 it looked pretty good at this point, but it still needed something. maybe some rocks, or a few bits of sun-bleached wood... something to make it scream "DESERT LANDSCAPE". and THAT is when things went a bit insane.

me: it's kinda like that Star Wars movie, with them trekking across that desert planet.

please note that i am so not a Star Wars nerd! i saw those movies (most, for the first time EVER) during the last six months. i am not even sure which one of the movies it was, what planet they were on, or any of the other relevant details. and, if you are rolling your eyes in disgust as you read those last few sentences, then you too can pretty much confirm that i am so not a nerd... but apparently you are. exactly.

however, i share my life with a guy who has multiple binders with all of the various cards he collected from boxes of cereal he ate as a child. the studio is filled with glass display cases for his most precious toys "models" and "limited-edition maquettes". there are boxes and storage bins filled with bit-and-bobs that would take half a lifetime for me to list.

and... he owns like TEN models of the Millennium Falcon, ranging from tiny ones that can fit in your palm to large ones that require their own display shelf.

THAT, ladies and gentlemen, is a nerd.

so, i made that passing comment about Star Wars, then i went right back to contemplating what "natural" elements i could add to my desert landscape. maybe some rocks that look like mini boulders... or a few mangled bits of sun-bleached wood.

when, suddenly... he got this crazed look in his eyes, ran out of the room, and returned a short while later with a large bag of teeny-tiny Star Wars figures... hundreds.. and hundreds of them. 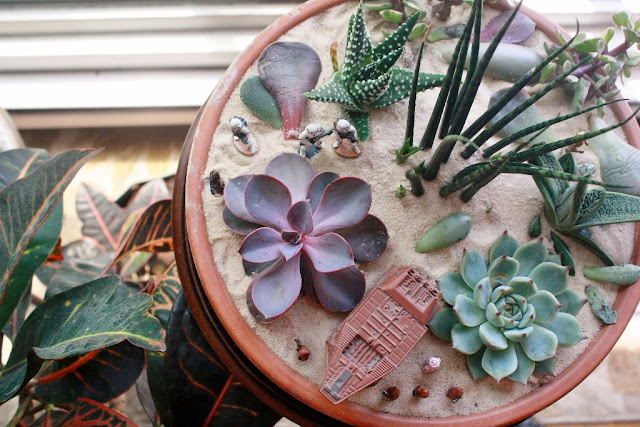 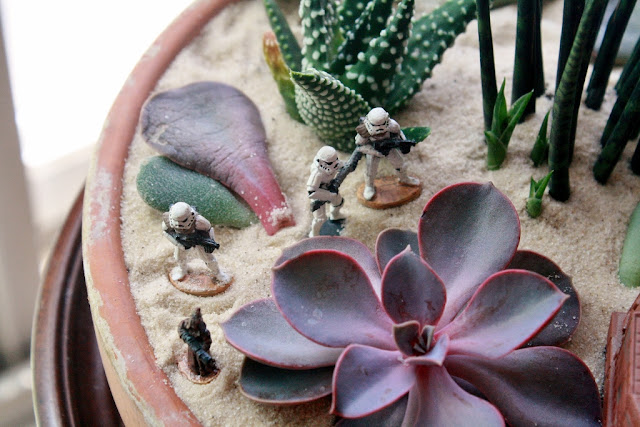 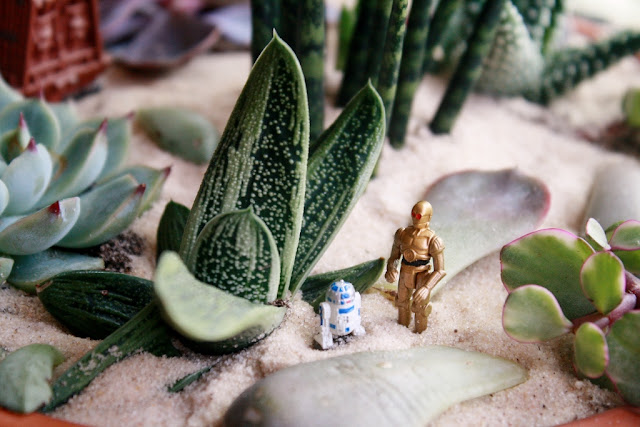 Jawas with R5-D4 and a sandcrawler. note the roasted almond, for scale. and, yes... i ate it when i was done. i had my choice of sandcrawlers, as he own a few. nothing abnormal about that, right? 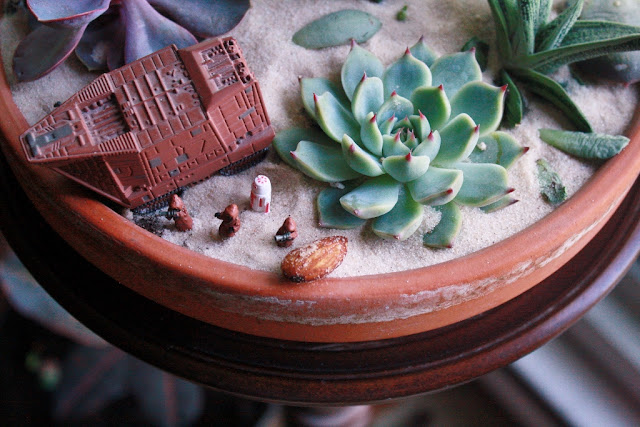 this dude, and this other guy. seriously... i am so not a [Star Wars] nerd. 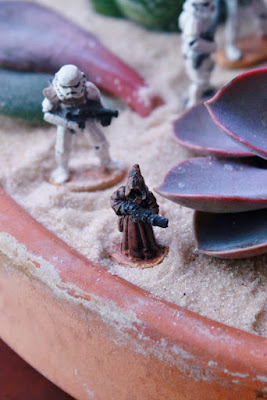 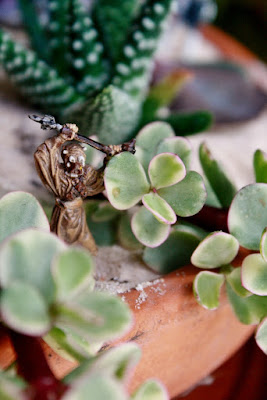 him: i bet if it was Star Trek, or Harry Potter, or something that you like, you would be giving me dirty looks for not remembering their names.
me: whatever you say... nerd!

throw in a bit of imagination, and it almost feels "real". i cannot tell a lie... i approve very incredibly much. 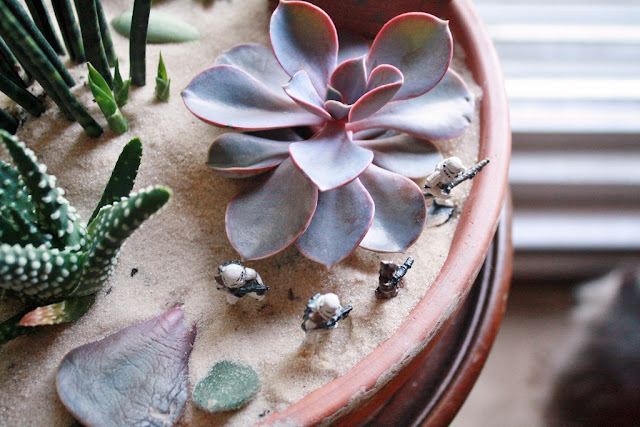 as for those loose leaves, it is only a month later, and some of them are already sprouting new, even-tinier plants. 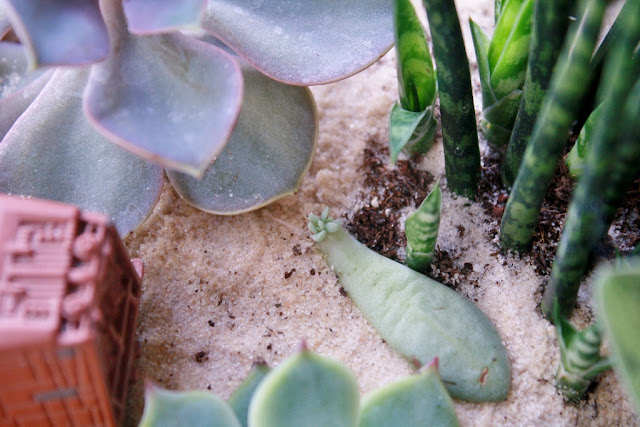 the cells at the base of the leaves contain all the necessary genes to sprout new plants, and the "flesh" of those plump leaves hold enough water and nutrients to help it along the way. the old leaf will gradually shrivel up as the new plant grows, by which time, the new plant will be firmly rooted in the ground. 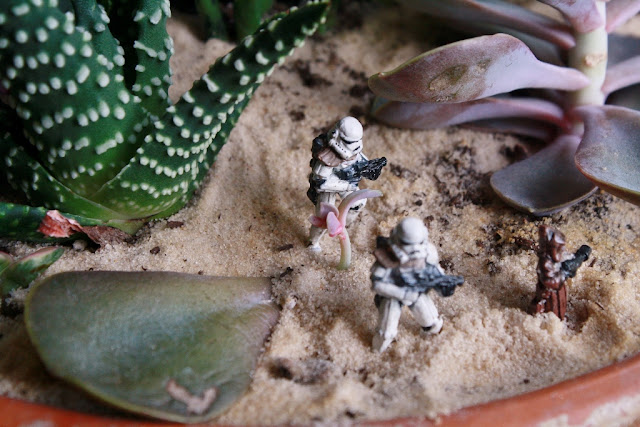 Nature is pretty awesome, no?

finally, i placed the tiny desert landscape on a (literal) pedestal near a sunny window, and i am keeping my fingers crossed that it will not be destroyed by a cat. 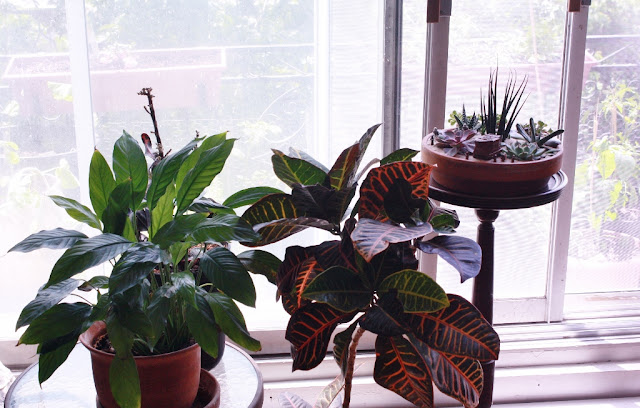 now, pardon me while i get back to this audiobook about the history of Alchemy. pretty much.

Email ThisBlogThis!Share to TwitterShare to FacebookShare to Pinterest
Labels: plants