starting a search for "container vegetable gardening" on Google or the You Tubes is like throwing yourself down a virtual rabbit-hole of insanity. 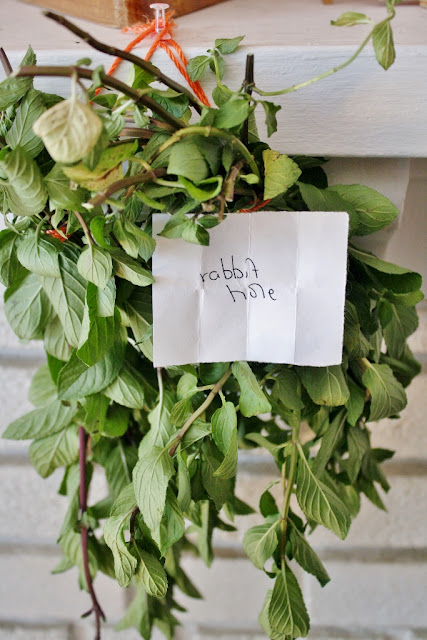 oh, it may start out innocently enough with someone sharing their best advice for growing things, but a few clicks later, and you can find yourself looking at some lunatic listing all the options for recycling bodily waste into fertilizer. how else do you plan to grow the best tomatoes down there in your bunker "when shtf "?
(Google that term at your own discretion if it is not already familiar to you.)

to be perfectly honest, i have stopped being unnerved by preppers, as i recognize that most of them are suffering from one or more conditions that my brand of 'doctorhood' does not qualify me to diagnose. the one group that does really get under my skin though, is the 'social media eco-warrior' bent on remaking the world.

[it should be noted, for the record, that i am not talking about politics or anything of that type.]

what really irks me most of all is the need to slap a pointless label onto everything that has been done a million times before, while convincing yourself that you have invented something brand new. it is what i usually describe as "claiming that you have re-invented the wheel, when you have in fact just made... a wheel".

case and point: what in generations past would have been described as "planting a small garden", be it in your backyard, or in a few containers on your rooftop, balcony, or fire escape is now referred to "urban homesteading". what???

worst of all, it is apparently socially unacceptable to admit that you enjoy simply doing a thing, as every single activity under the sun has to come with its own soapbox that you can climb up on at the slightest provocation to claim superiority over the rest of humanity.

make the mistake of asking an "urban homesteader" what kind of tomato (s)he is growing, and be prepared for a veritable avalanche of phrases like, "big agro", the "global industrial complex", and "bio-mimicing nature". i actually heard that last one on a televised gardening program... and i have not watched a single minute of it ever since. apparently, simply saying that you are growing some kind of cherry tomatoes, because you like eating them in salads, means that you are not 'consciously awakened'.

this kind of thing is not limited to just the gardening world. i recently found myself watching a knitting podcast/vlog in which the host stated that she planned on doing more sewing in the future (me: i like sewing)... as she wanted to move toward a 100% self-made wardrobe (me: interesting challenge to set for one's self)... so she was looking for sewing patterns for garments that would be a "conversation starter" (me: what???). i guess the soapbox will be the default accessory for every handmade item.

now, i do not want anyone (who stuck around for this long) to walk away thinking that i am discouraging the making/doing of things. to the contrary, i say... go out and make/do to your heart's delight. not only is it lovely to have some escape, some small respite from the soul-draining monotony of day-to-day life, but it really does feel good to make/do something for yourself.

so, the next time you are standing there, proudly displaying a carrot you grew in a bucket on a windowsill, or some hand-made/crafted thing, when someone asks for the socio-political philosophy behind said item, do not be afraid to tell them that you did/made it simply because it brought you joy. no soapbox required.

and, in case you are wondering what that green stuff is, it is some of the mint that is threatening to take over the planter boxes hanging from the railing. this one is peppermint, and there is an identical patch across the way of chocolate mint, which smells/tastes like a Peppermint Patty. 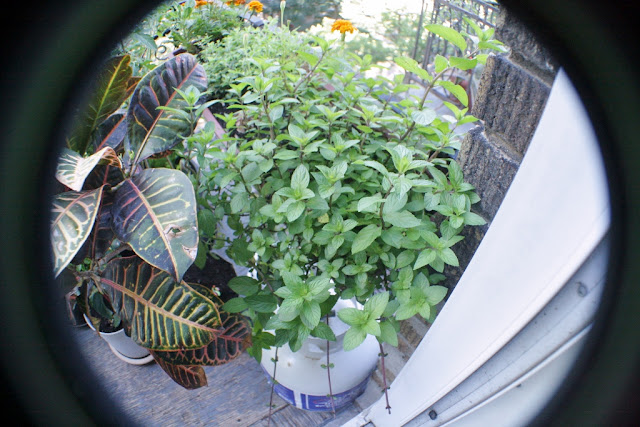 i pruned out some stems from each type of mint, and tied them up in bunches, which i will leave hanging upside down till dried. this process can be repeated whenever mint plants start to get out of hand, which they do with litle-to-no encouragement. once dried, the mint (leaves and stems)  can be stored in airtight containers (jars are especially nice for this sort of thing) to be used in making cups of Wintery teas, or to be infused into a most delightful bath for a minty, soothing soakful experience... or whatever use one can come up with for dried mint. 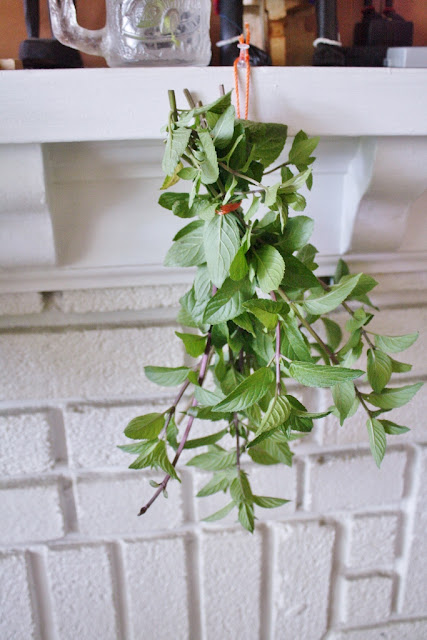 so while this ticks several of the categories on the road to being soapbox-worthy—locally grown (you cannot get closer if you tried), ethically produced (i swear i did not verbally or physically abuse a single leaf), and all the other lofty phrases—at the end of the day, it is still just a bit of mint. it is the same stuff that has grown wild on rocky outcroppings for millions of years.

and, yes, i will experience a small measure of joy every time i open the jar to retrieve some of the mint i grew myself, but i still plan to keep a pack or two of those handy dandy teabags on hand... just in case i find myself wanting a cup of minty tea in the middle of the apocalypse.

Email ThisBlogThis!Share to TwitterShare to FacebookShare to Pinterest
Labels: gardening