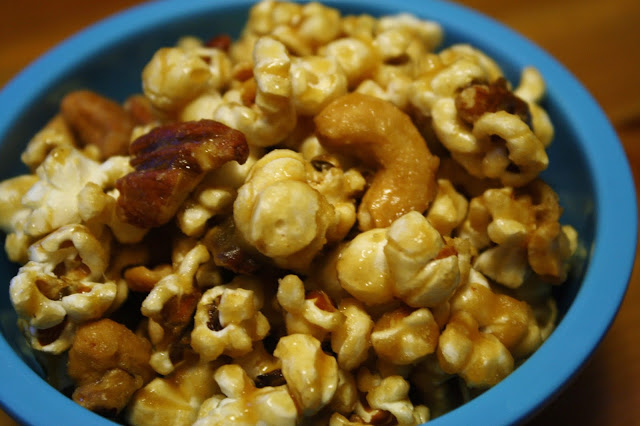 had a hankering for good caramel popcorn for weeks now, but it seems to be largely unknown in Canada (aside from the gross Cracker Jacks of our youth, that is)... so i gave up looking and made my own. 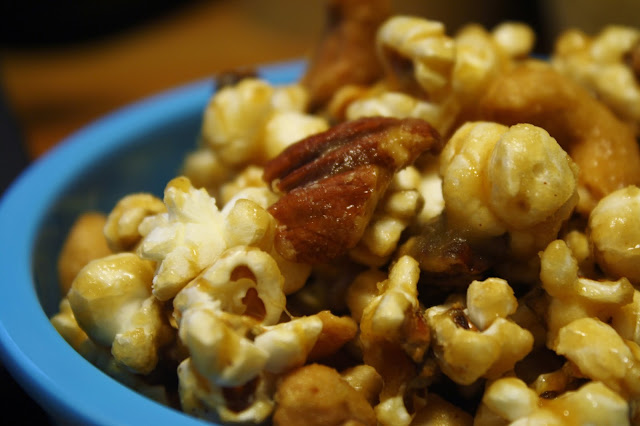 i read about a hundred recipes on the interweb, before i drummed up the courage to give it a go.  most recipes seem to rely on some combination of sugar (white and/or brown) and corn syrup, but there were also a lot of recipes that substituted maple syrup for the sugar, and i live in Quebec (where even the snow is mapley), so it seemed like the way to go.  my final formulation was based on this recipe.

[note that the proportions can be easily halved or quartered if you want to make a smaller batch, but the full recipe offers enough for sharing... if there's any left]

- if you're not especially good at multi-tasking, get all the parts in place before beginning to make the maple coating.
- combine the popcorn, pecans, and cashews in a large bowl or container that will allow for mixing in the maple topping.  i used a roasting pan lightly-coated with cooking spray to make cleanup easy.
- coat the lower half of a wooden spoon with cooking spray and set aside.
- line a large cookie sheet with parchment paper and set aside.  in a pinch, you can place the parchment directly on a kitchen counter or similar surface.
- in a saucepan, melt the butter on low-med heat, then add the sea salt, vanilla extract and maple syrup, without stirring.  bring to a boil and continue to boil (without stirring) on low-med until it reaches 300°F on a candy thermometer, or until it reaches the hard-crack stage, if you're not using a thermometer (**see note below).  how long this takes depends on how rapidly you're boiling the mixture, but most estimates are roughly 20-30 mins (although it took me nearly an hour at a moderate boil).  keep a careful eye on the mixture as it nears this final stage, as the line between perfectly-done and burnt is a mere blink of the eye.
- (taking extreme care not to spill any of it on yourself) drizzle the maple coating over the popcorn-nut mixture.
- working quickly, toss with the greased wooden spoon (i used two spoons) until the mixture is well coated and the maple coating feels like it's starting to harden.
- spread the mixture onto the prepared parchment and allow to cool for a couple minutes.  it should be cool enough at this point to use your hands to break it up into clusters.
- cool completely and enjoy!!!  store any leftovers in an air-tight container .


** i made this without a candy thermometer, by using the cold-water method (here's a handy guide for making candy without a thermometer). place about 2 cups of very-cold water into a small container.  remove the pan from the heat. using a small spoon, drizzle a few drops of the maple mixture into the water, then reach into the water and use your fingers to form it into a small ball.  (if it doesn't form a ball at this point, skip directly to returning the pan to the heat).  pull the ball out of the water, stretch it (using the thumb and forefingers of both hands), and observe.  the test ball should break apart, producing a "crack" noise when it reaches the hard-crack stage.  if it simply stretches like taffy, return the pan to the heat and continue boiling another 2-3 minutes before testing again.
Posted by n.ayisha No comments:

[in an effort to clear up the several thousand photos i've taken in the past few months, i am (hopefully) going to post a series of entries of recent (mostly knitted) projects.]

i did a marathon amount of dyeing earlier this year, mostly of mill-spun yarns, using a combination of commercial acid dyes and home-sourced natural dyes.  the challenge comes in turning all of that into useful objects.  honestly, i'd be perfectly content to mount them on a wall where i can stare in awe at the interplay of colors, but (apparently) i can't justify making any more fiber purchases unless i reduce the stash a bit.  so, here goes... 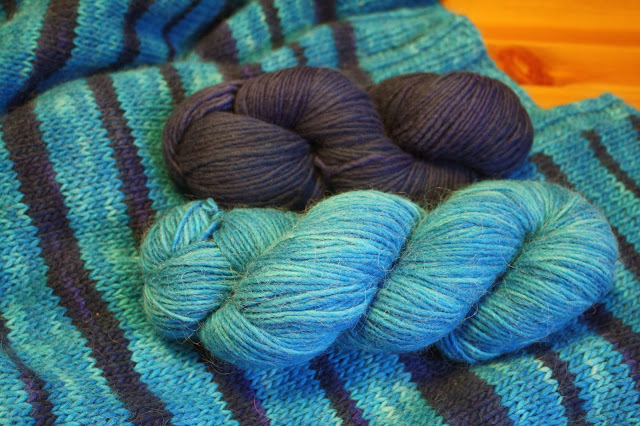 it all began with a mill-spun combo of wool, alpaca, and silk which i kettle-dyed Caribbean Blue (foreground, above) using Dharma Acid Dyes.  this was the single-most frustrating color ever, and i gave up when there was still dye bleeding after the twentieth rinse.  my wardrobe consists of an array of blacks and greys, so this was a challenge... which i (partially) overcame by striping it with a dark blue (Azul Profundo, to be precise) kettle-dyed, semi-solid yarn by Malabrigo (background, above).

the rose/rouge pattern was written for a lighter-weight yarn, so it took a bit of mathemagic to make it work... but it worked, and i crafted a totally sweet (short-sleeve) sweater.... 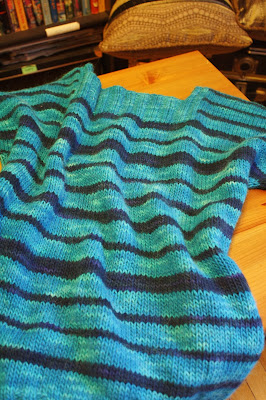 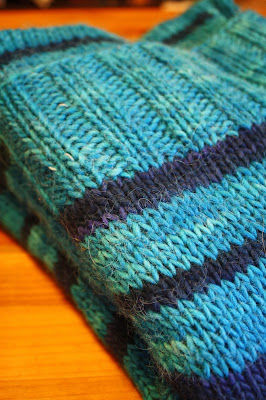 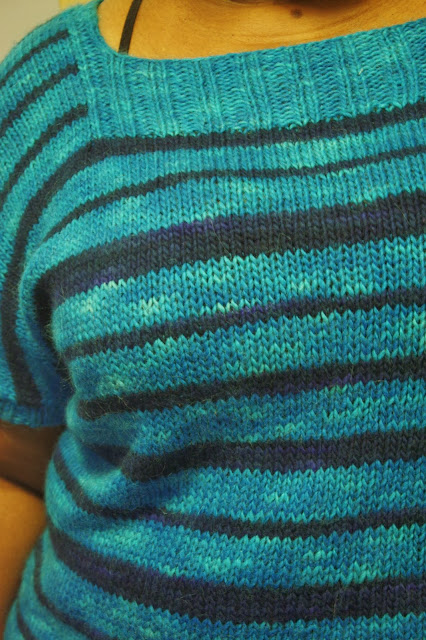 as a total aside... i would like to add that the reason why people with cats take so many photos of their cats sitting on random stuff is because it is near impossible to get a photo of your stuff without a cat getting in the way. 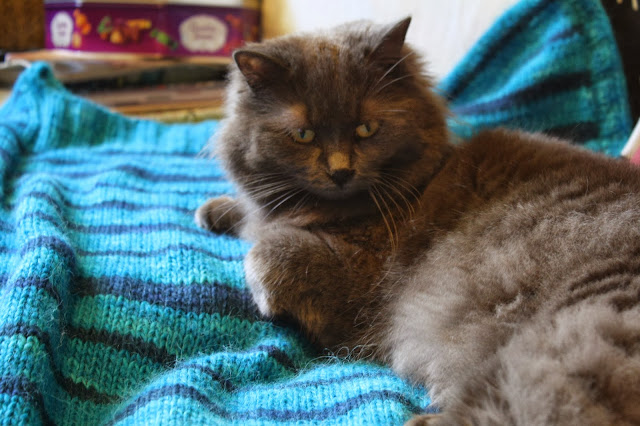 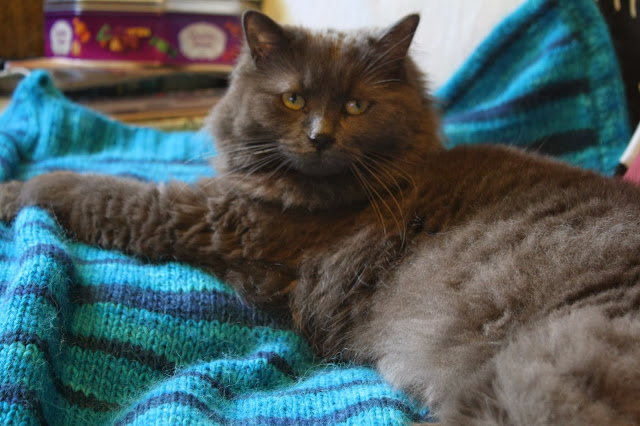