15: domestic conflict of the international kind...

most households bicker over things like 'who gets to hold the remote control' or 'who put the empty milk/juice carton back in the fridge'. you know... normal domestic conflict. then there is our little household, where we experience the (occasional) domestic conflict of the international kind. case and point, some weeks ago:

this was followed by several rounds of high-level negotiations, and we arrived at the concession that i could pick a second team/nation for which to cheer. however, i was not allowed to engage in any external show of support for said team for as long as Croatia remained in the tournament... which they did, right up to the very end. i am fairly certain that this sort of conflict is why the United Nations came into existence.

but, most of all, under no circumstances was i to mention this arrangement to his father, who got on the messenger after each match to make sure we had watched the game. every single such conversation included the same question. did she watch it too? the assumption of my support seems to be genetic.

we are not really sports-fans of any type, but i do enjoy watching the occasional soccer match. i especially love watching the games on the Spanish-language channels back home in NYC, where the enthusiasm of the announcers is downright contagious.

it should also be noted that i played a bit myself, way back in high school... for the better part of one semester. i had a friend who was on the team, and she talked me into trying out. the coach took one look at me, and decided that i would take over for the goalie when she graduated at the end of the year, which made sense as i was taller than most of the team members by at least a couple inches.

my goalie-in-training career was going well... until one day. the coach had divided us into teams for a quick scrimmage. naturally, i was playing in net for one of the sides. i made a truly impressive save that looked like something out of a king-fu flick, and i was feeling quite proud of myself. then i stood up, but the girl who had attempted to head the ball into the goal was still laying there... knocked out cold.

i had kicked her right in the forehead—with my steel-toed cleats—and she was non-responsive for a full minute or two. i was traumatized by the experience. everyone kept repeating the same "reassuring" phrases: it was an accident... this stuff happens... it is part of the game. the coach tried to change my mind, but that was the end of my fútbol playing days. these days i just occasionally cheer from the sidelines. that is, when i am actually allowed to cheer.

so, congratulations on taking silver, Croatia. it was a nerve-wracking adventure at moments, but i thoroughly enjoyed my time in your cheering section. you can absolutely count on my support in the future... that is... unless i decide to cheer for someone else.

we had used their quarter-final victory as an excuse for a lobster meal, so how do we top ourselves when they were playing in the finals? [full disclosure: i went digging through the chest of topics to find this one, as it was uber-appropriate for today.] 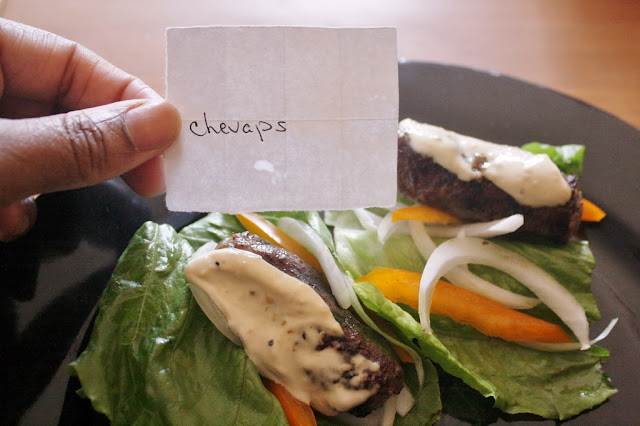 ćevapčići (chev-OP-chi-chi)—or, chevaps, as we usually refer to them around here—may just be the single best thing to have ever come out of the Balkans. they are skinless sausages, usually made of some combination of beef, lamb, and pork, which are all delicious things.

the taste is similar to gyro meat, which makes sense, as they utilize a similar range of ingredients. chevaps cook in minutes on the grill or in a pan, and they can be served however you prefer: alongside wedges of flat bread, in a wrap, atop a salad... or just pick one up with your favorite eating instrument (i recommend the classic thumb-and-forefinger combo) and enjoy.

him: when i was a kid and we went to cookouts with all the Croatians, you would just get chevaps and an onion.
me:  uhm... an onion?
him: yeh. a green onion.
me: oh... like grilled, or sliced in some sort of salad?
him: no. just a whole green onion.
me: a whole raw green onion? what are you supposed to do with that?
him: you take take a bit of chevap and a bite of onion, and just eat them together.

then i just stared at him with a puzzled expression, which is still the case whenever that subject comes up.

chevaps are a staple at this time of year, when most of our meal choices consist of some sort of salad served with some sort of protein... or even just a salad, especially when it is made with something filling, like chickpeas. you can probably count on one hand the number of times we eat rice or potatoes during the Summer. it is way too hot for that foolishness.

we had a post-game lunch of chevaps on pieces of romaine lettuce, with strips of sweet onions and sweet peppers. 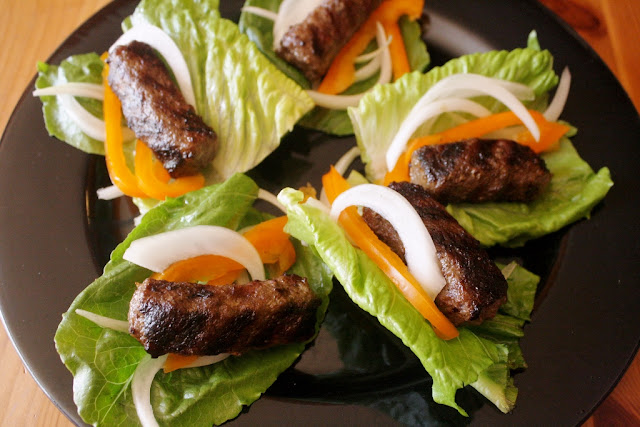 they go well with creamy toppings, like sour cream, a creamy dressing, or a few crumbles of feta cheese. you are limited only by your imagination... and your grocery budget. i opted for a dollop of my (current) favorite Caesar dressing. 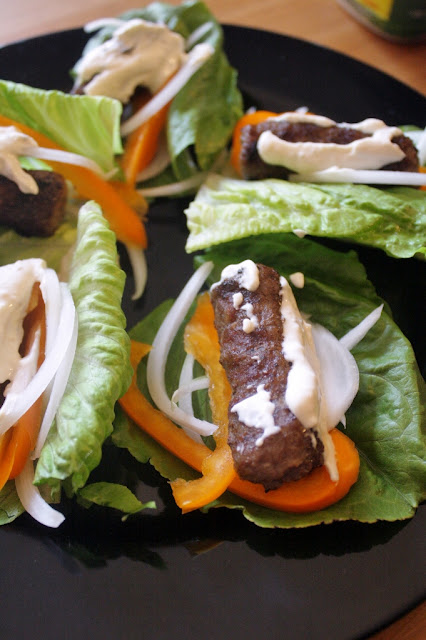 this one is "mighty" because it contains more garlic that the regular stuff. i approve so very much. 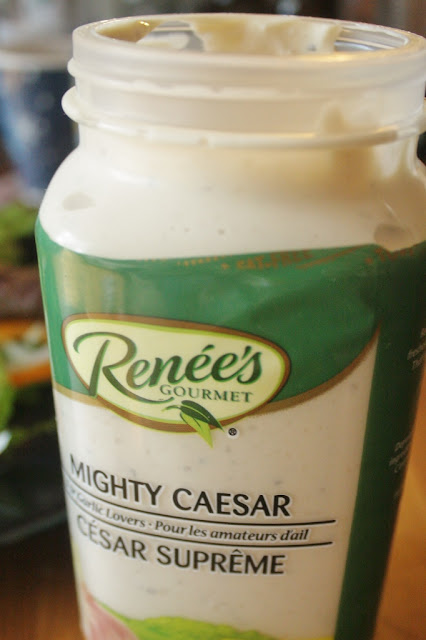 anyone willing to kiss me after this? pretty much. 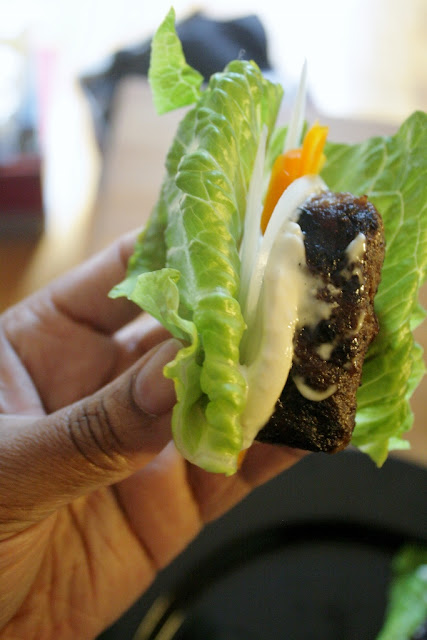 we did manage a bit of cross-cultural harmony in our beverage choices. he had a Caribbean-style ginger beer (which, despite its name, contains zero alcohol, which is perfect because he dislikes the taste of alcohol in most things... which is completely insane, i know). i had a grownup beer that was made just a stone's throw outside of Montreal.

this company, Unibroue, has become my go-to beer brand this side of the border, and it was quite amusing to learn that they are owned by the same company that owns my favorite American brand, Sleeman. [random aside: Sleeman's company history reads like the plot of a Hollywood movie.] 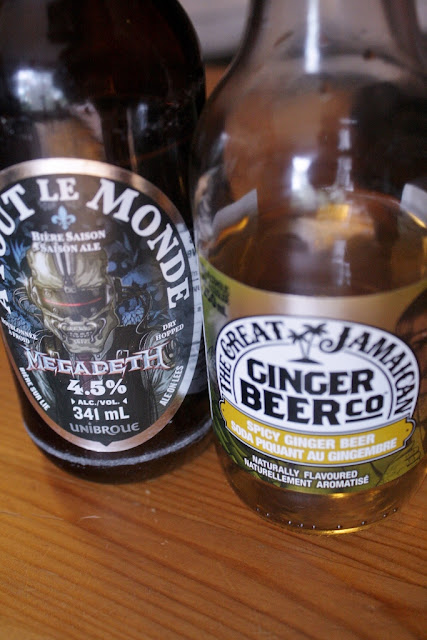 so, now, if you will pardon me, i plan on enjoying a quiet Sunday afternoon doing almost nothing. yes, Croatia may have only come in second in the series, but that they made it all the way to the finals was a massive victory in itself. plus, they saved me the trouble of picking a second team to cheer for... then having to explain said choice to him... then him having to explain it to his dad (because i would most likely be hiding out while that conversation took place). but the best thing of all is that i do not have to watch a single soccer fútbol game for the next four years. cheers!