this year's Balcony Garden Project is coming along quite nicely. the tomatoes took a bit of a beating in the past week of near-constant thunderstorm warnings, which brought the occasional bout of torrential rain and strong winds. however, they seem to be holding their own out there. 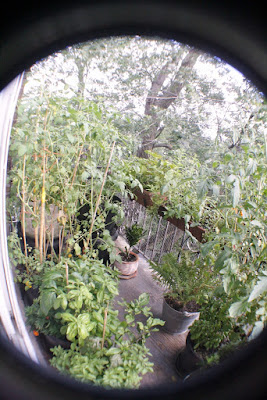 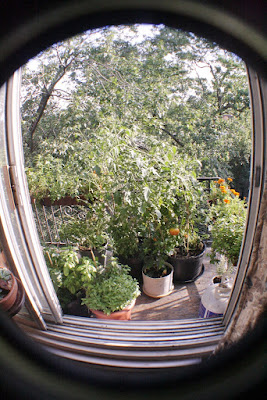 we are practically taking turns standing watch over one large, burger-bun-sized tomato that is going to be ready for picking any day now. while i recognize the insanity in getting out of bed at five AM to check on a tomato, i would be heartbroken to wake up one morning and find it laying there, chewed to bits by the squirrels. 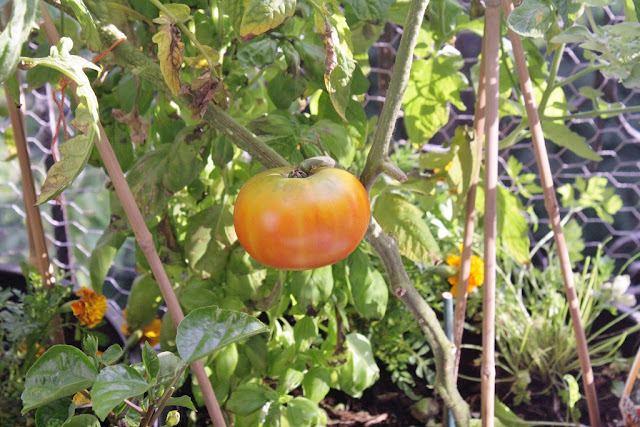 to be perfectly honest, i would be far less annoyed if they actually ate all of the stuff they destroyed. but, instead, they seem to delight in taking single bites out of things, then leaving them laying there on the ground, just to rub it in your face. those dirty little...!

naturally, i was joined in my brief photo-taking adventure (brief, because the humidity levels are indescribably bonkers right now) by the Little One. it is like having an incredibly cute stalker with her around. 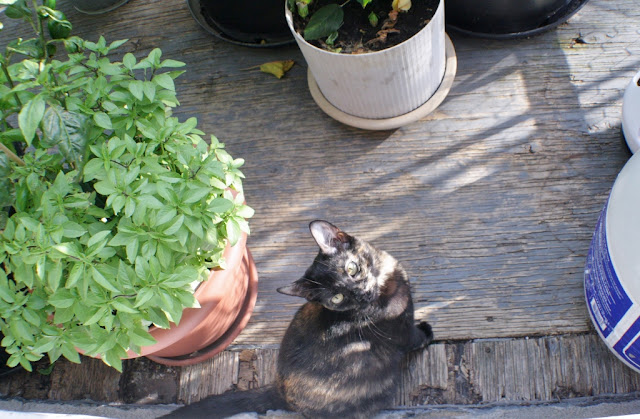 if you look past the adorable little cat, you will note that the flooring on our balcony is overdue for replacement. i was hoping that it would be done this Summer, but what we goi instead was two weeks of sheer construction hell, which is the subject of today's post. 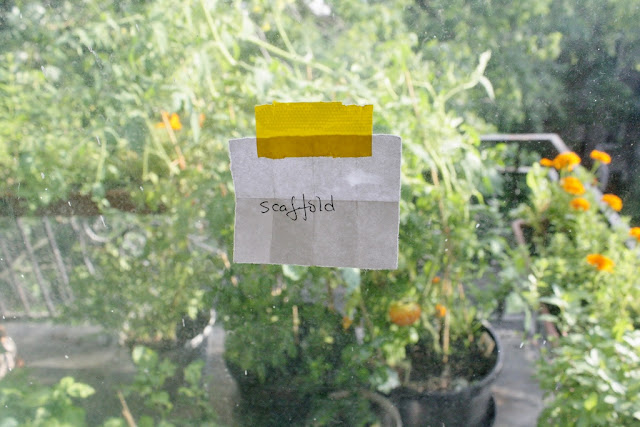 [note: i wrote the following some weeks ago, but i never got around to adding the photos and positing it.]

i looked out of the window this morning, just in time to see the moon staring back at me between the branches of the maple trees. i continued gazing at it, until it finally disappeared against the backdrop of a bright sunny morning. i was taking advantage of the relative quiet at dawn, because i knew that it, too, would not last long. 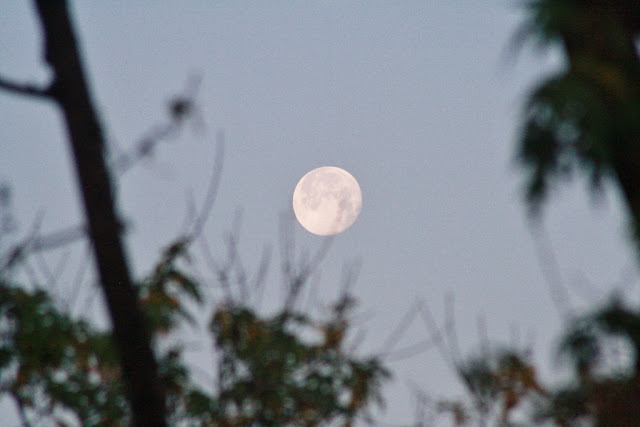 to merely suggest that life around here has been a bit chaotic of lately would be an understatement of epic proportions. our building has been undergoing some work to the exterior masonry, about which we received negative two day's worth of advance notice... as in, we were officially notified of said project two days after it had begun.

that was when the owner of the building knocked on our door to inform us that they "they would be doing some work on the building, and you would not be able to use your balcony until it's done". meanwhile, we had already been staring at this sight for two full days. 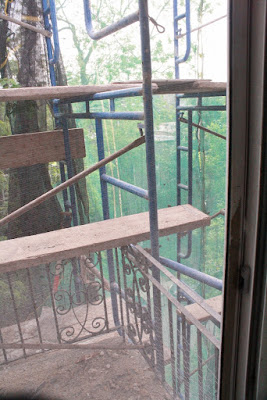 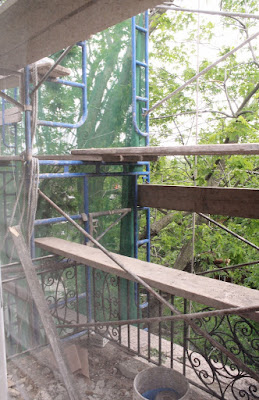 every morning, i would open the drapes, only to look at this. 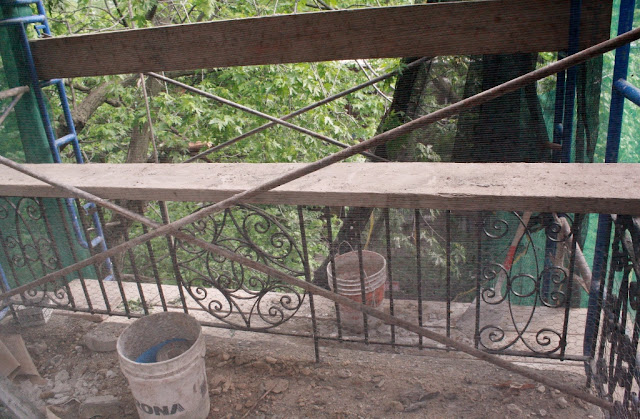 if you squint, you can see the top of the old maple tree. 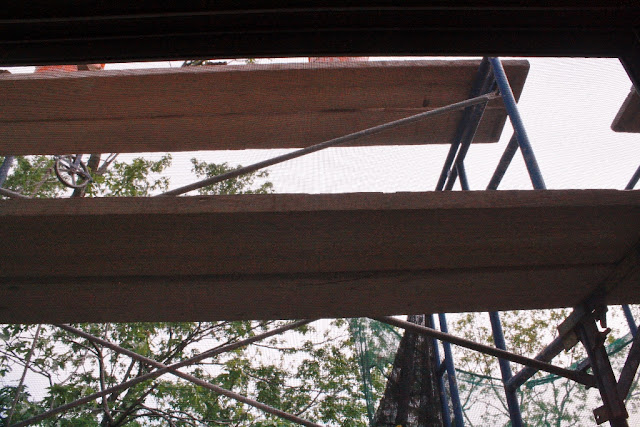 and the space where my plants should have been looked instead like a demolition site. 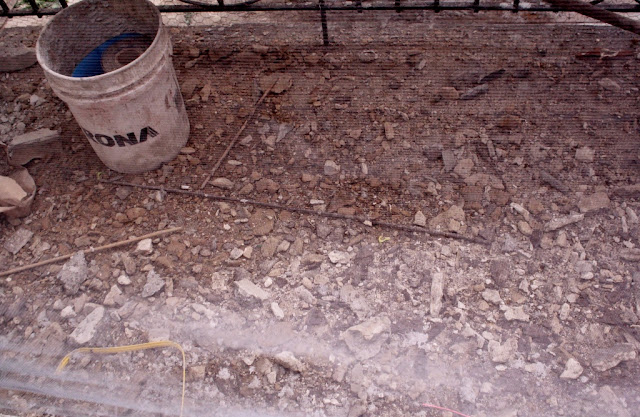 my favorite animator stuck his head out the door as they were setting up the scaffolding on day one. luckily we had not invested too much effort in this year's balcony garden project (like spending months raising seedling from scratch, like we did in year one), or i would have blown a gasket at that point. we scrambled to drag all of the transplants in their massive, soil-filled pots indoors, where they remained for two full weeks.

however, it was during a brief exchange with the workers that first day that i was introduced to the phrase that instantly became the newest entry on my list of "worst things"... SEVEN A.M. DEMOLITION!

and, boy, did they ever! every single day, like clockwork, they were there at seven AM... with a massive crane, jackhammers, and what sounded like hydraulic battering rams. all bashing away at our building.

you know that thing that happens in cartoons, when a character gets annoyed, and one eye starts visibly twitching like mad? that was pretty much me through the whole thing. i need to send a "thank you" card to the person who invented earplugs, and bouquets of flowers to the people who make Tylenol and Advil, because the city of Montreal would be down a few construction workers were it not for the copious application of all three.

most annoying  of all was the realization that he was absolutely and utterly unfazed by the whole thing. he sat at his desk, day after day, listening to music and drawing away like there was nothing going on.

me: seriously... how can you even work right now? i feel like i can't complete a thought. every single nerve in my body is on edge. i just want to scream and start throwing things.
him: it's actually kinda soothing. reminds me of working on construction sites with my dad. i like it.
me: you really need help.

that shadowy figure is a cute baby squirrel who used the scaffolding as an excuse to stop by for regular visits. 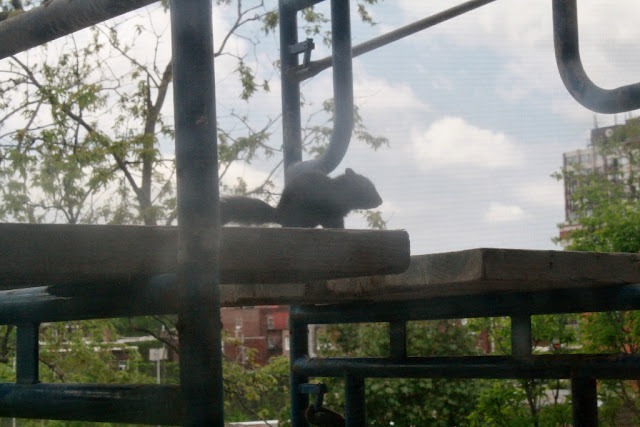 it is almost easy to forget why i despise them so much when they are that tiny... almost. 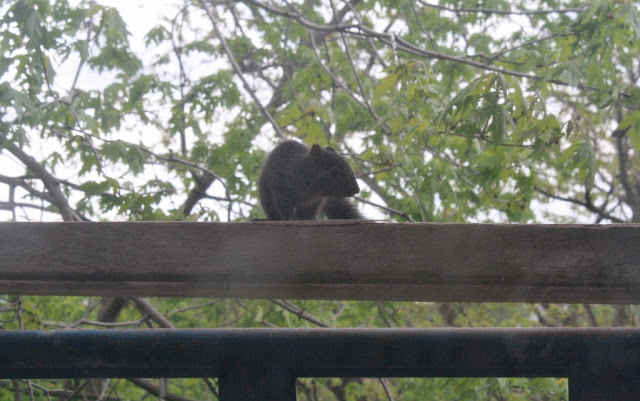 i gave up any hope of them being finished on the scheduled day, but they returned from their lunch break, and the tone quickly shifted. then the scaffolding began to disappear. they even took the time to clean up the rubble that was covering the deck of the balcony, and they pulled out a pressure washer to remove the muck that had been deposited on the exterior of the windows and glass doors.

unfortunately, they neglected to notice that i had left one of the bedroom windows partially-opened to get something resembling fresh air flowing through the place. i took one look at the water dripping from the bedroom drapes, and splashing into the puddles that were already spreading across the floor... then my left eye started to twitch all over again.

it has been more than a month since they left, but their presence lingers on... especially when it rains. during one particularly activity-filled day in the construction process, the non-quiet was broken by a sudden loud crash on the roof of the building. it shook the whole structure, and likely the neighboring buildings too.

most of the neighbors stuck their head out into the hallway to try to figure out what was going on. it was that jarring, and that frightening, that you knew instantly that something was very wrong.

living, like we do, on the top floor, i was convinced that the roof was about to cave in any second. i went around, trying to gather all three cats in one room, should it become necessary to make a quick exit with them in tow. it sounds crazy, but if you were there, i guarantee you would have done the same.

fast-forward a few weeks later, and we are sitting together in the living room one rainy evening, when there is this sound coming from down the hall. he went to investigate, and returned to inform me that it was raining... in our apartment.

turns out, they accidentally dropped a load of bricks (or some such thing) from the crane onto the roof,  and it had cracked the waterproof lining. so now the rain was seeping into the area below that, and drip... drip... dripping from the ceiling—that i personally repainted last Summer—onto the hallway floor below... and the forecast was calling for rain for most of the coming days. where did i put that bottle of Tylenol, again?

the roof has since been resealed, but that part of the ceiling still needs to be repaired and repainted. i still find myself staring up at it, and experiencing a minor bout of panic every time it starts to rain... and the balcony still needs to be fixed. i shudder to think what will be destroyed when that finally gets done. yep... there is the old eye twitch again.