the breakfast of royalty...

there i was at 4 A.M., munching on a Minneola orange and catching up on my latest television obsession (which shall go nameless, lest i be judged by my viewing habits), when it occurred to me... the Minneola is the perfect cooking orange.  it has far more flavor than should be allowed in a single piece of fruit, including the highly fragrant rind.  imagine compressing a half dozen "regular" oranges into one... and tossing in a Meyer lemon or two for even more absurd deliciousness.   winter is orange season, and a bag of Minneolas in my grocery basket is a guarantee of good things to come.


while the orange can be easily integrated into anything from a flavorful couscous to a decadent cheesecake, i could not resist the call of a simple breakfast fit for the aristocracy.  the scone, let's face it, is at its core a pedestrian shortbread masquerading as royalty.  think: buttermilk biscuits... with a pedigree.  the cranberry-orange scone is a familiar sight at coffee shops trying to appear swankier than they really are, but 1) i don't have any dried cranberries on hand, and 2) i'm not a fan of the cranberry... so i went in a slightly different direction using whatever i could find in my baking stash.  behold... the Minneola orange, raisin, walnut, brandy scone (scroll down for the recipe).  and yes... that was my breakfast.  the boy had one with a cup of tea, and the remainder were sent off with him to work.  yes... i am... i mean... we are awesome. 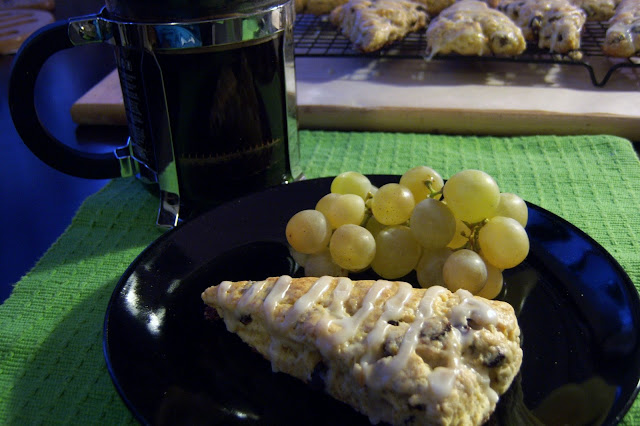 speaking of royalty... after saying goodbye to my cupcake Diesel shortly before Christmas, Santa brought me two lady kiddies who definitely think they are my social betters in every possible way.  i introduce to you (Lady) Ophelia "Philly"... a.k.a. Ninja-kitty... a.k.a. The Shadow... a.k.a. "hey you... get your head out of my glass!"....


they are incredibly sweet, though a bit skittish as they get used to their new home... but i still miss my Cupcake terribly.


Minneola-orange raisin walnut brandy scone
1 c. raisins (or dried cranberries, if you must)
zest of 1 Minneola orange
juice of 1/2 a Minneola orange (~2 tbl.)
1 tbl. brandy
1/3 c. super-cold butter or margarine (i used margarine, because i prefer the finished texture in scones)
2 c. all purpose flour
2 tbl. sugar (brown sugar is the default around here, but use whatever you have)
1 tbl. baking powder
1/4 tsp. baking soda
1/2 tsp. salt
2 eggs
1/2 c. + 2 tbl. cream or half-and-half (substitute with non-skim milk, if that's what you have on hand)
1/2 c. chopped walnuts


the Thompson raisins i had on hand were rather large, so i cut them up, added the zest, juice, and brandy, mixed to combine, and let it sit covered for half an hour.  if you're in a hurry, nuke it in the microwave for 20 seconds and let it cool to room temperature for about 10 minutes. 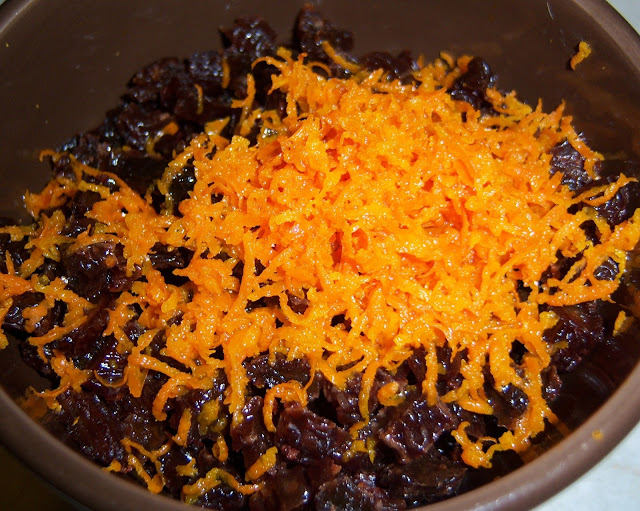 while the raisins are macerating, put the butter in the freezer.  when you're ready to make the dough, combine the dry ingredients in the mixing bowl.  whisk the eggs and 1/2 c. cream together in a separate bowl (you can place this mixture in the fridge to keep it cold).  cut the butter into the flour mixture until it resembles coarse breadcrumbs.  work quickly to avoid the butter softening.  add the raisins, walnuts, and  egg-cream mixture (hang on to the egg-cream bowl), then use a fork to combine, scraping around the sides of the bowl as you go.  you're scraping and cutting into the center of the mixture, turning the bowl as you go.  avoid over-mixing.  it should resemble a moist, but not sticky, dough. 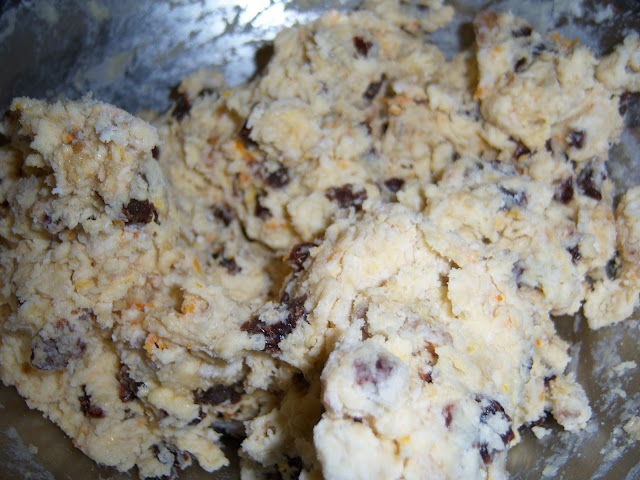 turn the dough out onto a lightly-floured board, and press (don't knead) it into a disc about the size of a dinner plate.  using a sharp knife (i used a dough scraper), cut the disc into 10 wedges. 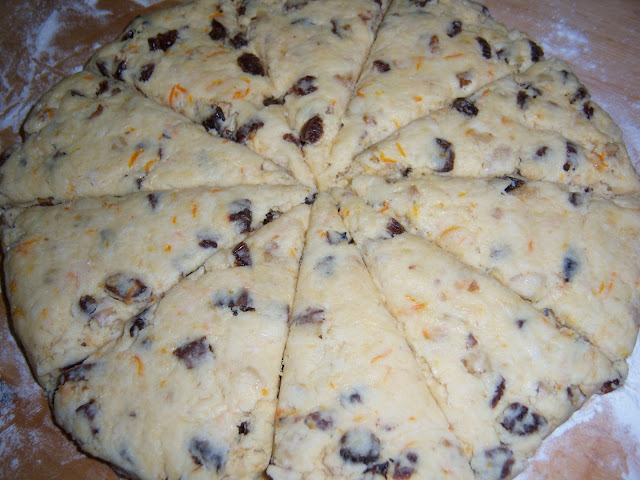 arrange the wedges on a parchment-lined baking sheet.  add the remaining cream to the bowl that held the egg mixture, swirl to combine any remaining traces of the eggs, then brush onto the tops of the wedges. 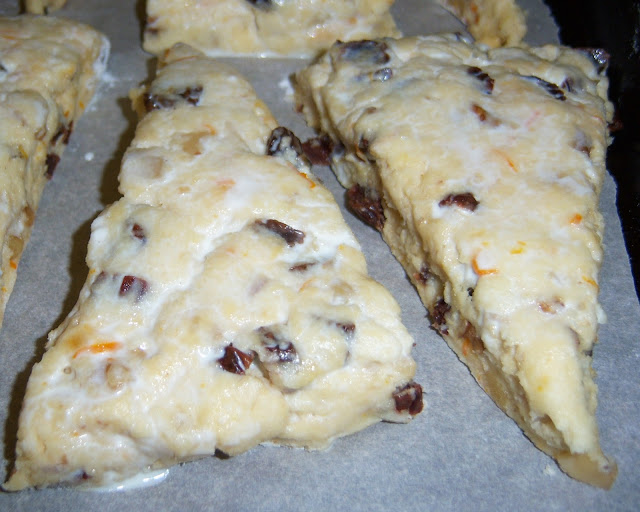 as a general rule, i usually leave baking powder-leavened doughs to sit at room temperature for a few (3-5) minutes before placing them into the oven.  this allows the baking powder to get a head start on doing its magic before the crust starts to harden in a hot oven.  bake the scones in the top half of a 400ºF oven for 10-15 minutes, rotating the baking sheet halfway through for even browning.  move the scones to a cooling rack, then drizzle on the icing (make sure you put something below the rack to catch potential drips). 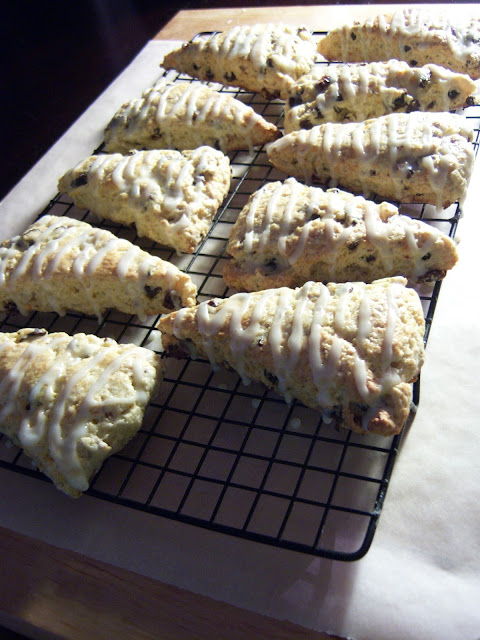