[i realize that i am automatically dating myself by admitting this out loud, but... here goes.]

i spent a good hour (or so) this morning, watching the "Two Princes" music video on repeat. what prompted this insanity, you ask? well... let us just call it a late-night stroll down memory lane. but, most of all, i was trying to figure out what was going on with that knitted cardigan. and, no... there was no alcohol involved. it is just a thing i do.

i once followed a woman around a supermarket for what must have been a good half an hour, trying to get a closer look at the sweater she was wearing. i am still convinced to this day that she took longer than was necessary purchasing her groceries because she was concerned that some strange lady pushing an empty cart was going to follow her all the way home. playing an almost thirty year old song on repeat for an hour is downright sane by comparison.

him: (waking up to find me very much not asleep): why aren't you sleeping?
me: i tried, but the thunderstorm was a bit unnerving, so i listened to the music of my adolescence instead.
him: i see.
me: and now i am listening to music that is older than me.
him: older than you? so, like from the Elizabethan Age or something?

then he dragged a pillow over his head, in anticipation of my swift and exacting revenge. he knows me so very well.

today's topic began about two months ago... when our entire building was in the grips of something resembling torture (i will talk about that when i put that piece of paper from the treasure chest). for now, it is enough to know that we were on the verge of forming a mob to go after a crew of construction workers who were making our collective lives a living hell.

then, he announced that he was going to be out of town for a few days. so, there i was, being tortured a little more each day, and left alone with three equally frustrated kitties. no exaggeration, i had to turn into a pet therapist to get them through that whole ordeal. it was insane.

this was the perfect time for a comfort meal. 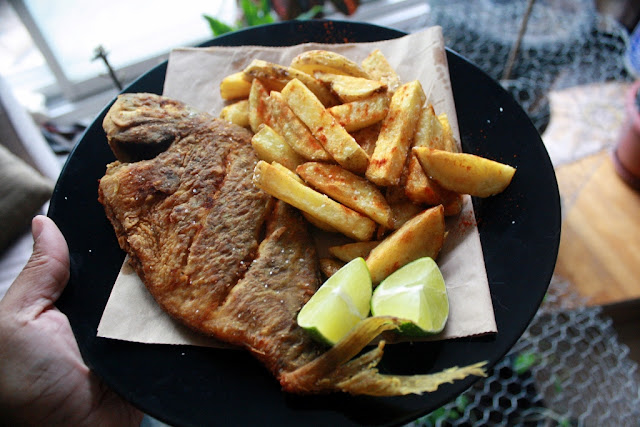 it should be noted that we do not do a whole lot of frying of stuff these days. i would love to climb up on a soapbox and talk about "healthy  living" and other such lofty sounding things, but the simple fact is that it really stresses me out to have to dispose of used oil/grease. it is a pain in the neck, and an unavoidable reminder that you just ate a meal that was swimming around in all that fat. it is so much simpler to leave that sort of thing to the professionals and just treat oneself to the occasional fried-by-someone-else meal.

but, still, i wanted to burn the whole world down... and i really wanted fried fish. 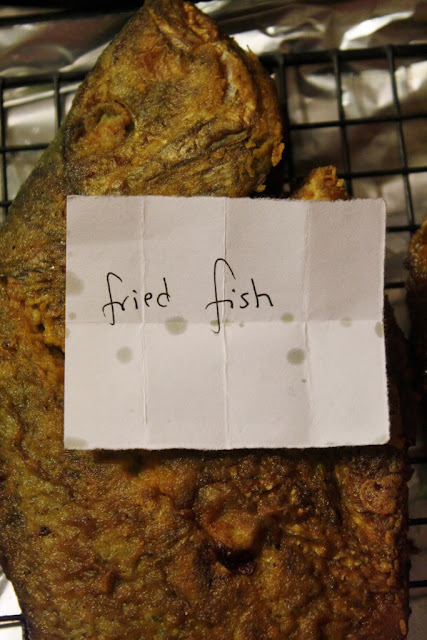 my homemade fish-and-chips was such a tasty experience, that i promised him i would make it again. so, here we are almost two months later.

i should point out that this a wholly Caribbean approach to frying fish, which begins with the understanding that there are bones involved. so, if you are one of those types who can only deal with carefully manicured fillets, consider yourself amply warned.

these are porgies. they are tasty, and awesome for this kind of frying. they were seasoned using a mixture of green onions and spices that were blended with a bit of vinegar. it is what my people refer to as "seasoning"... clever, i know... and there is always a jar of it somewhere in the fridge. 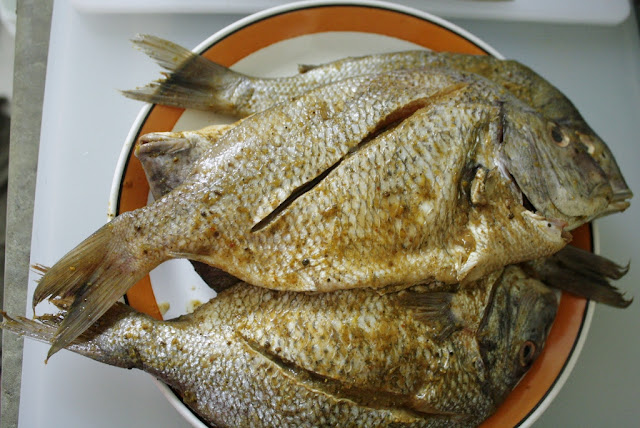 the flour for dredging was also seasoned. if memory serves, i used ground cumin, chili, turmeric, salt, and black pepper. then i gave it a quick mix to combine. 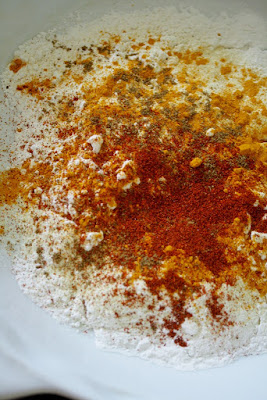 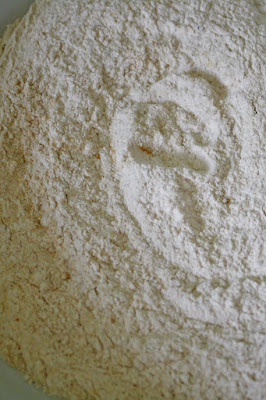 each fish was placed in the mixture and lightly dredged. 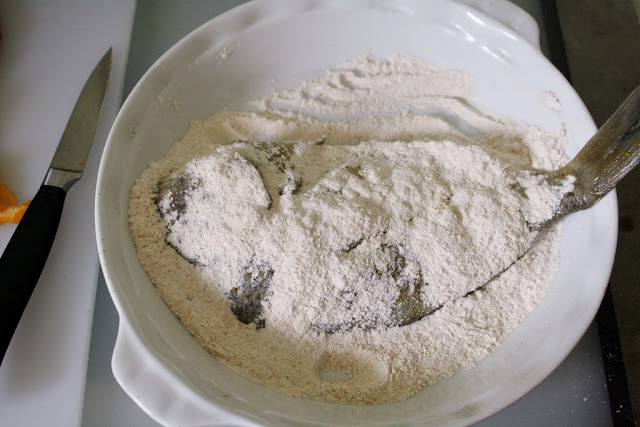 then placed in a shallow pan with about half an inch of oil. 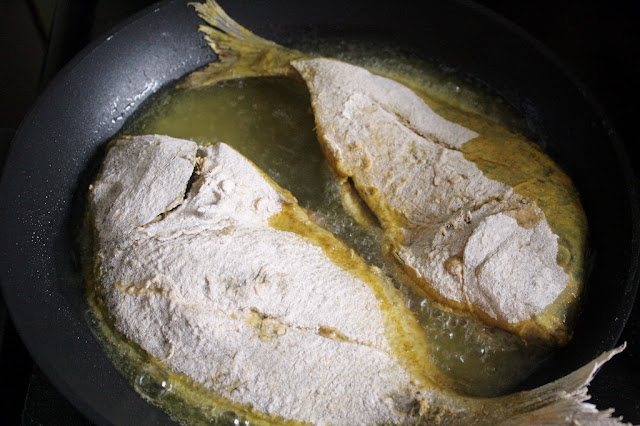 now, you could just cook the fish all the way through, and eat them as is, as i did with the fries, however, i was still steeped in my stroll down memory lane, so i took it a step further to make what is referred to in Caribbean cuisine as stewed fish.

the objective is not to cook them all the way through at this point, but to form a browned exterior, so they got a flip after a few minutes. 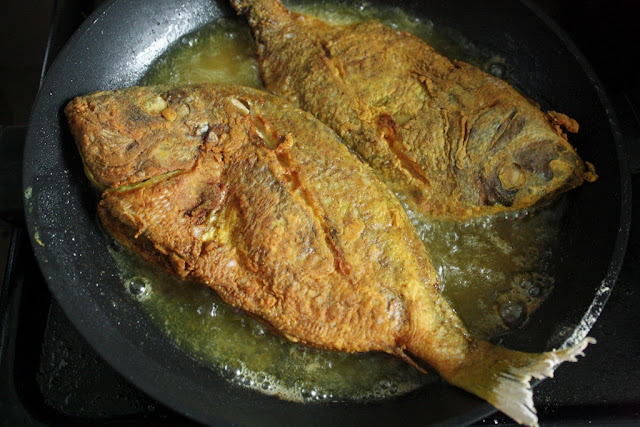 i removed them to a cooling/draining rack, dumped out the oil, and gave the pan a light wipe with a paper towel. then returned it to the heat, and turned my attention to the collection of veggies for the next step. 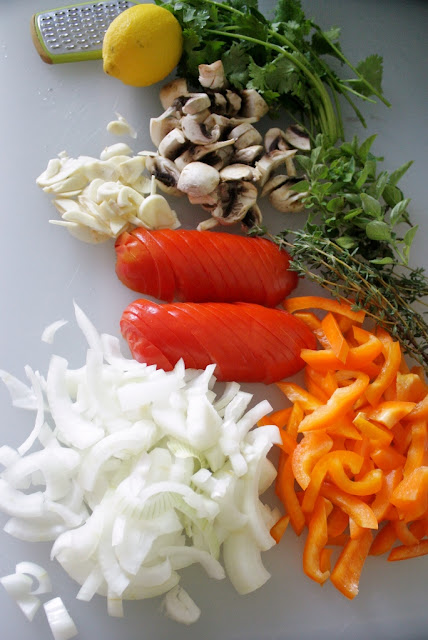 random aside: these were some freakishly large plum tomatoes. i feel a bit traumatized. 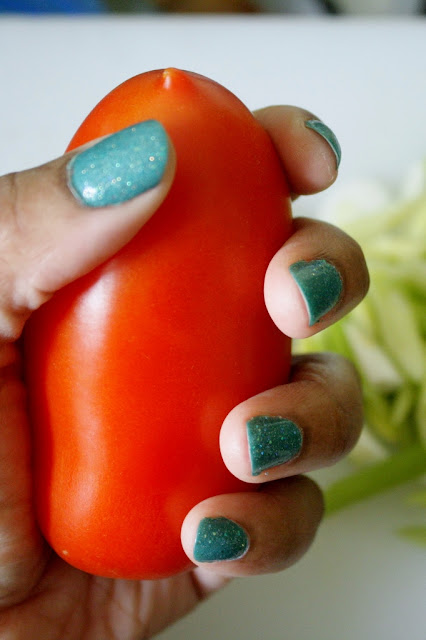 [full disclosure: he did most of the next bit, as i was making salad in between taking photos... in clouds of steam.] sliced pepper, onion, garlic, mushrooms, and tomatoes went into the pan, along with a splash of olive oil. 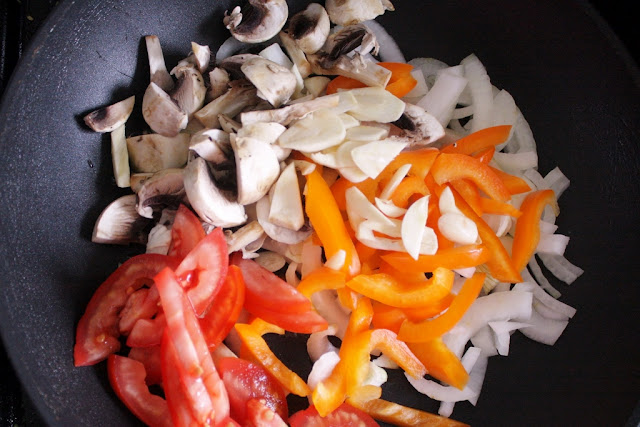 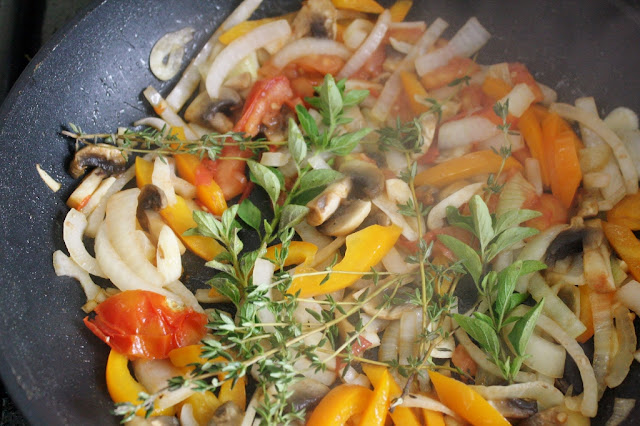 another minute or two later, and add a healthy squirt of ketchup and some water, taste, and add salt/pepper as desired. he also added a bit of freshly-grated lemon zest at some point.

now it is time to add the fish, and i find it easiest to pull the veggies to one side... 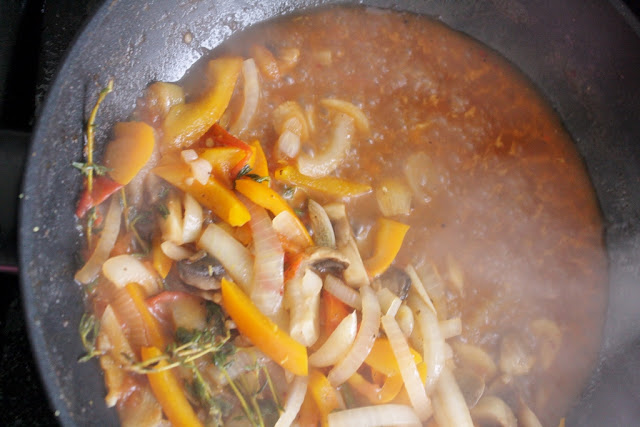 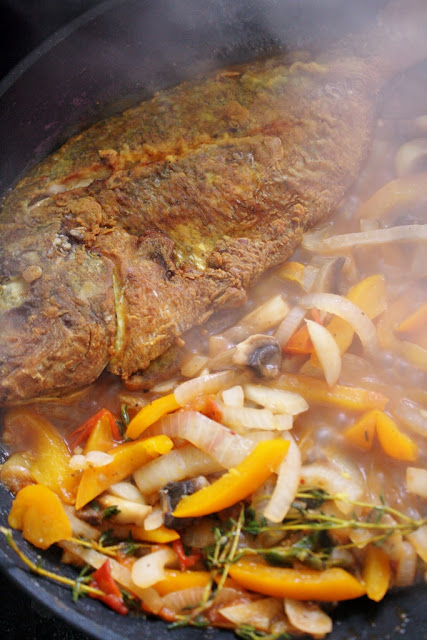 then shovel all the veggies on top of that fish, so there is room to add the second one, then distribute the veggies over both of them in some manner that seems relatively even. add a splash more water if needed, then just cover and cook for about five minutes, or until the fish are done all the way through. i tossed in a handful of chopped cilantro at the end. 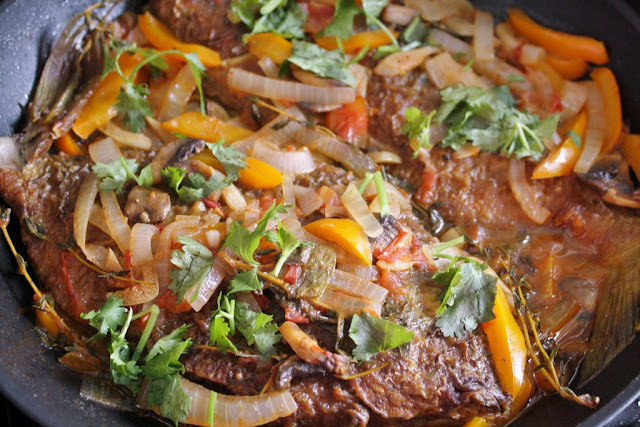 the flour on the exterior of the fish will add a lovely richness to the sauce, so it is best served with something that takes advantage of all that deliciousness. i made a bit of coconutty rice with red beans.

he likes his veggies/sauce over the rice (left), but i prefer mine on the fish (right), to mix in as i eat. 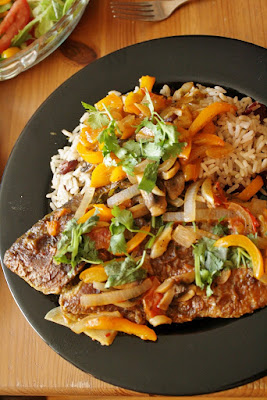 and we had a jointly-prepared salad. i chopped the veggies, and he made the vinaigrette. the meal was amazing, and a good time was had by all. 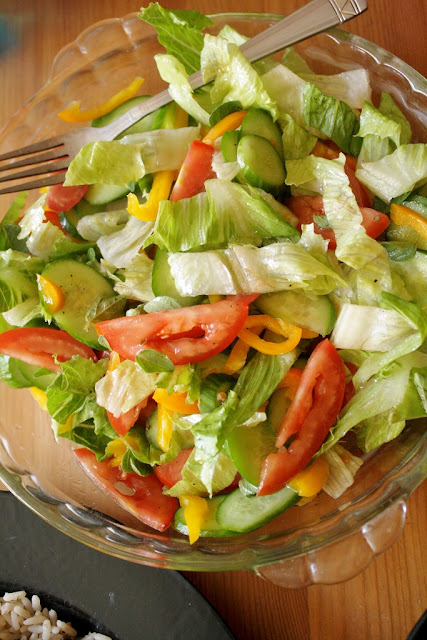