he got off the phone after wishing him mom a happy "name day". it is a bizarre (to me) Croatian practice in which everyone seems to be named after a Catholic saint, and said saint's day is regarded with more importance than one's own birthday. he, however, was not named after a saint, and i have a sneaking suspicion that he feels a bit left out.

him: how come i don't get a name day?
me: because you're special, and none of the saints were good enough. did your mom have cake for her name day?
him: probably.
me: you just spoke to her.
him: i know, but i just wished her a happy name day. i didn't ask about cake.

then i gave him that look that says, "i pity you for being such a man".

just thinking about that conversation makes me want cake all over again. this will not end well.

as i have no doubt pointed out multiple times before, i have been known to follow total strangers down the street or around a store, just to get a closer look at a knitted garment they happen to be wearing. but the insanity does not stop there.

at this point, it is near-impossible for me to not direct my full attention to any knitted garment that appears on the screen when i am watching a movie, tv show, random You Tube video. basically, wear a sweater near a camera, and you are pretty much guaranteed my full attention. we could be in the middle of watching the most engaging thing, when all you hear is...

him: you're staring at the sweater, aren't you?
me: yep.

then we have to pause and figure out how far back we have to go to when i stopped listening. although, consider some of the nonsense we watch, not paying attention can be a wise decision most days.

so, there i was re-watching an episode of "Corner Gas" [full disclosure: i have seen every single episode of that show... multiple times... and the new animated series is also enjoyable], when i realized that i was only paying attention to Oscar's sweater. 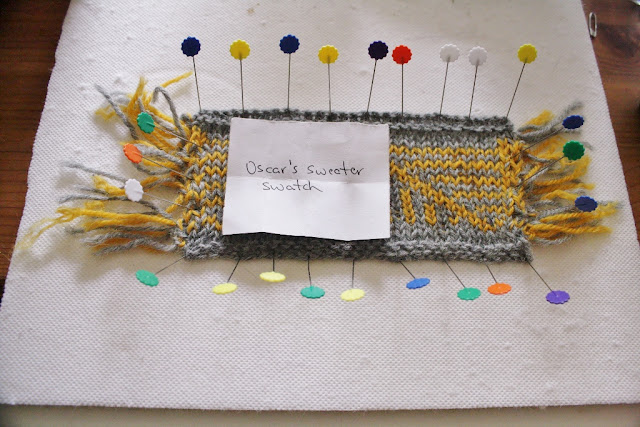 i paused, took a screen cap, then i spent a bit of time studying the image. in this case, my interest had nothing to do with the rather un-remarkable construction of the cardi. it was all about the design of the fabric. 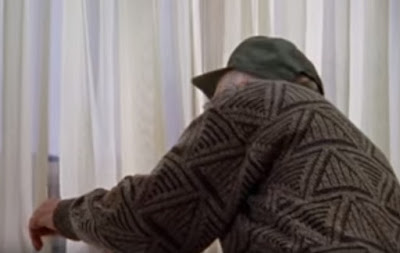 it was simple and, above all else, it was logical. at the end of the day, it is just a mosaic of triangles made up of stripes of color that go either this way or that. once you get past the first few rows, you can easily figure out what comes next without constantly having to count tiny squares on a chart. in a word... logical! i approve so very much.

i began by making a rough sketch of the basic motif, which i transposed to a spreadsheet. there are a few websites and software specifically designed for creating grid-based designs of this type, but i have a template with the columns and rows already set up for this very purpose, and it suits me just fine. i played around with the line thickness from one color to the next, but the basic idea remains the same. now came the fun bit.

first i tried two different options for the orientation of the horizontal and vertical lines. horizontal bars in the down-facing triangle...

or in the up-facing triangle. i may have just invented a new yoga pose.

then i took both of those options, and multiplied them to see how the design played out across a larger surface, then i did the same thing again, this time, staggering the pattern so that they stacked differently. and, just like that, i had four different (but similar) ways in which that simple combination of lines and spaces could play out. i prefer the staggered versions (bottom half of both images), but any of those combinations... or even all four at once... could be incorporated into any garment, from a comfy old cardigan, to a rather posh set of matching mittens, scarf, and a hat. 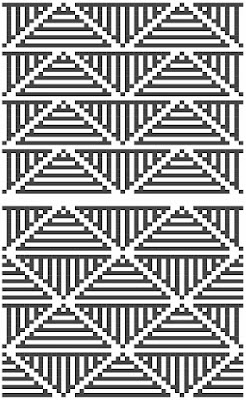 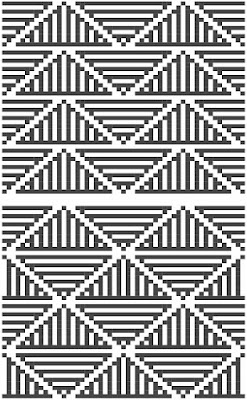 i planned on knitting up a quick sample of all four motifs for demonstration purposes only. however, as this notion struck me shortly after midnight, i had to settle for a small section of my favorite one... on the bottom right.

ignore the sloppy, uneven stitches, and i am fairly certain that i got my colors mixed up at least one or two times. this is what you get when i go searching for yarn in the dark in the middle of the night. the basic point is that a rather unexciting chart can provide inspiration for so many future-makes. 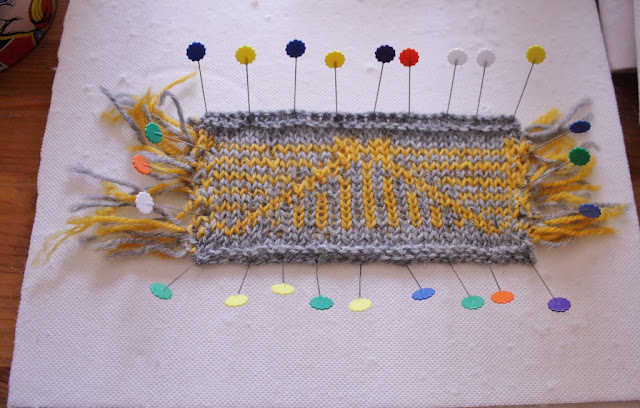 and, in case you think this was an isolated incident, it should be noted that i do this sort of thing all of the time. i am especially drawn to lines and textures, so i occasionally save an image of some interesting thing.

this was a sweater worn by a contestant on an episode of Turkish Bake Off... which was the first of the many "Bake Off" titles we officially tapped out of, as it was way too wacky for even the two of us combined.

i still cannot figure out that textured stitch, despite having devoted hours to searching every stitch dictionary i can find, both in hard copy and online. one of these days. 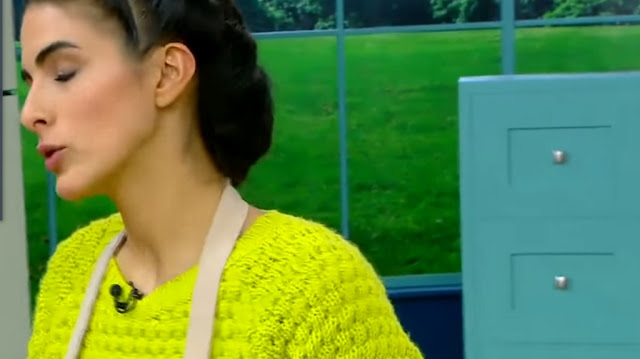 the host of said program wore this dress in one episode, and i was mesmerized by the design on the fabric. of course, in my life, that would only ever happen in black and white. 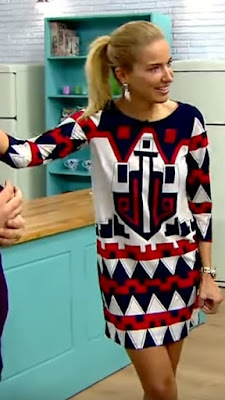 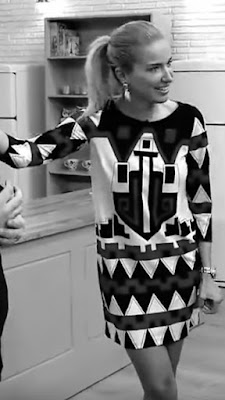 there was also this interesting skirt worn by a minor character in an episode of "Dad's Army"... one of my favorite "lull myself to sleep" things to watch late at night. i have seen every episode so many times, that i can let my mind drift while it plays in the background, like a favorite old story you can recite from memory. "Last of the Summer Wine" (a personal favorite) and "Hogan's Heroes" are also on that list. perhaps i have said too much.

i especially like the way the lines cross on the diagonal, and it would be interesting to use a similar approach to add an element of interest to an otherwise boring knitted top. i am still contemplating that one. 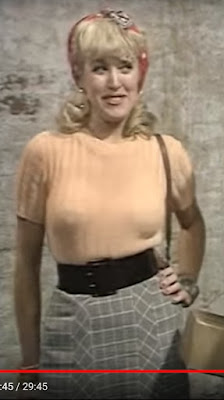 then there is that bloody sweater from the "Two Princes" video. my life will have zero meaning until the day i finally figure that one out. 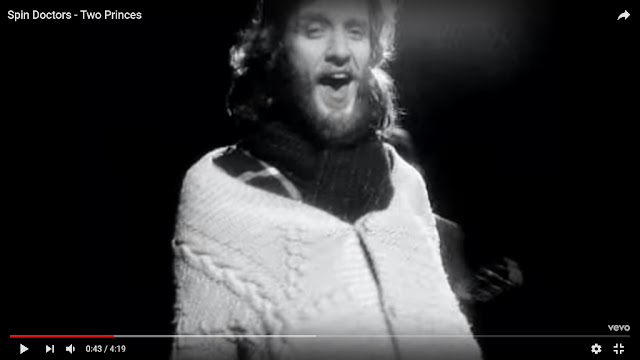