Jultember: who broke who first...

i am having one of those days where i want someone to come to my home and make me cupcakes, then hand a plate full of them to me along with a very large cup of tea... then leave instantly without ever saying a word. you know... one of those days.

i have been failing miserably at finishing up a few knitted items i have on the go at present, but i want to share a recently completed thing. ta da!!! 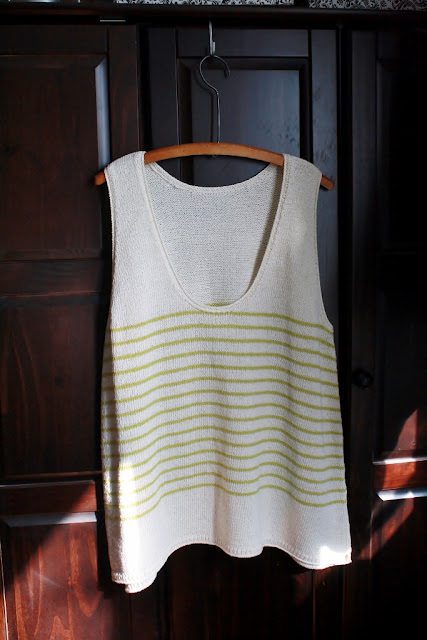 the pattern is Saco Stripes by Pam Allen, and it was been the bane of my existence for a full year... or more. i was working on this top back when i was cyber-stalking newborn lambs last Spring—as in, more than a year ago. i finished it shortly thereafter—as in, i followed all of the designer's instructions (while only making a few minor alterations of my own). however, it never quite managed to seem done, so it remained at ninety-nine percent in my Ravelry projects for the next year... or more.

then something magical happened one day this Summer while we were playing a bit of Codenames: Duet. [random aside: i highly recommend that as a board game for two, if you are into that sort of thing. it is especially entertaining when being played with someone who you know far too well, because you get the added challenge of trying to think like they do when stringing together wholly unrelated things... but that is not the point of this thing.]

so, there we were playing our game, as you do. and i was sitting there with my ninety-nine-percent-done top on my lap, holding it up and turning it this way and that, while contemplating what i could do to salvage the thing.

him: did you block it?
me: not really. i want this to be a light summer top that i can wear and toss in the washing machine without worrying about blocking, but it is just going to keep curling along the edges, and that is going to annoy me exponentially.
him: it doesn't really take much for that to happen.

then i gave him the look that lets him know he is asking to be pinched.

then i took my turn at the game and returned a short while later to staring at the pile of knitted fabric on my lap.

me: actually, i am afraid that the fabric would just curl up along the i-cord.
him: yeh, i was just thinking the same thing. maybe some garter stitch?
me: meh. i'm not a fan of garter stitched edges.
him: then just do a few rows of ribbing. that will stop the rolling up.
me: yeh. i think that is the only real option. either that or i learn to love the roll.

then i paused for a moment and took a serious look at him, sitting there next to me on my favorite sofa, his eyes cast upward in a contemplative fashion as it was his turn to give the next clue in the game.

that is when it dawned on me...

there he was, casually tossing out one suggestion after another in an effort to cure my crafting dilemma... and—worst of all—he actually understood what all of those terms meant!

me: i feel like i owe you an apology.
him: why?
me: did you hear yourself a minute ago?
him: yeh. i was just thinking how crazy it is that i know what all of that means.
me: i think i broke you
him: yep. i think so too.

then we put aside our game, and watched the latest movie from that cult favorite Writer/Actor/Producer/Caterer known to the world of bad-movie lovers as Neil Breen. i spoke previously about him (and the completely bonkers dream i experienced after watching one of his films). well, after much anticipation, we were finally able to get our hands on a copy of his latest... uhm... work of art...?

this one is called Twisted Pair (2018). there are no words to describe how much he manages to outdo himself in the production of this particular one. forget the usual "so bad... it's good" label. this one was "so bad... i wanted to throw my computer out the window when i was done watching the thing". i am not going to dwell on the specifics of the movie (as that is not the point of this thing), but i would just like to make a prediction: the person whose legs we see during the film (but we never see their face), is in fact a third brother. i expect that to be the big plot-twist when he releases the sequel... because he is insane enough to think this steaming pile of garbage needs to be revisited.

we were somewhere in the middle of discussing said likelihood, when i had the second grand revelation of the evening.

if you go back a few years or more, you would arrive at the point where i would frequently walk past the studio door, then screech to a cartoon-like halt when i get a glimpse of whatever nonsense he was watching.

it was always the same thing.

then he would clear his throat, which i knew from experience meant that he is about to put on his "announcer voice", which he uses when telling me the name of the most ridiculous movies. something like...

because i would usually start walking away by the time he got to the second word of the title.

fast-forward to the present, and i welcome a dose of the absurd. we spent last October watching a ridiculous movie-a-day, and it was fabulous. i spend more time these days watching reviews of "so bad it's good" movies on the You Tubes than anything else.

and there i was in that moment, where we followed up discussing how to salvage my knitted garment by watching a Neil Breen film, and all i could do was shake my head and wonder...

[the rest of this post is meant to serve as project notes for the top.]

as noted above, i finished the top at the end of last Spring, and i (frankly) was not crazy about the thing. all of that rolling fabric at the edges was driving me insane, and i was not going to commit to blocking what was supposed to be a quick wash-and-wear garment every time i wear the thing.

for the non-knitters reading this: this top is made of the same basic knit fabric as a t-shirt (just with much thicker yarn). if you ever cut into a t-shirt, it instantly rolls up along that raw edge. the hems and collar are the only thing that stop that roll from happening. this top of mine lacked any such borders, so it was behaving like cut t-shirt fabric on every edge. you could see how that would drive a person crazy.

after rejecting several possible fixes (see above for his contribution in said process), i decided to go with a very narrow trim of two rows of ribbing followed by two rows of stockinette stitch (plus the pick-up and bind-off rows). the ribbing was just enough to stabilize the fabric, while those two rows of stockinette made for an attractive tiny rolled edge. this bit of re-finishing was applied to all the edges of the top.

you can see the difference it makes in this one image. the armhole on right side of the photo has been re-finished while the one on the left has not. likewise, the back section of the hem was re-finished, but the front was not (neither was the collar edge at this point). 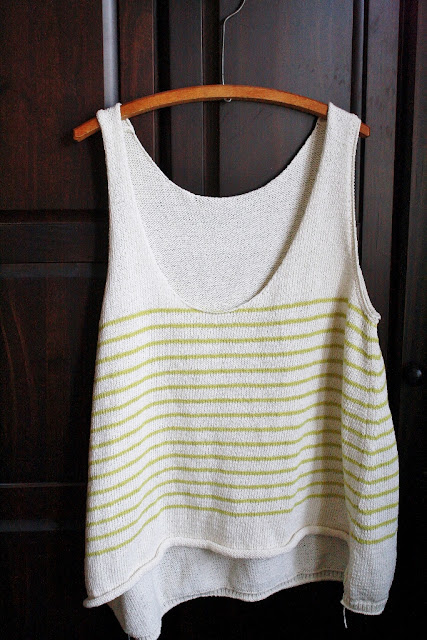 a closer look at the shoulder straps (?) shows the difference between the two armholes. 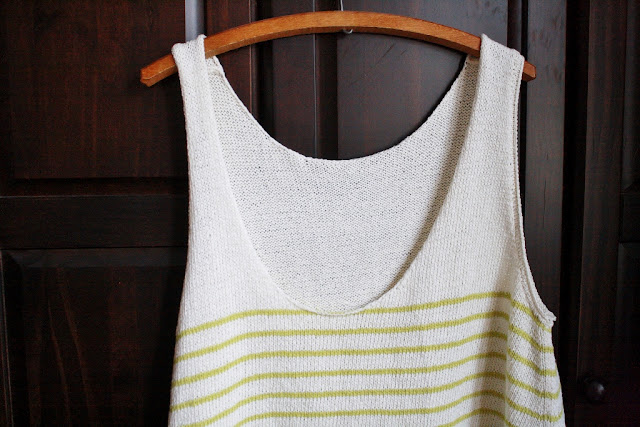 but the most dramatic difference is at the hem. the front and the back of this top were the same length before i added that trim to the back. 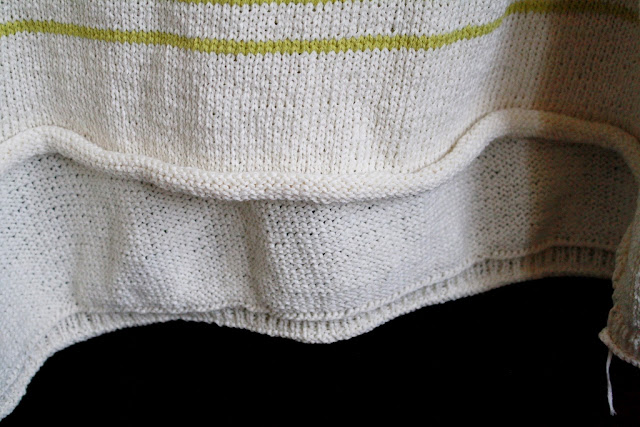 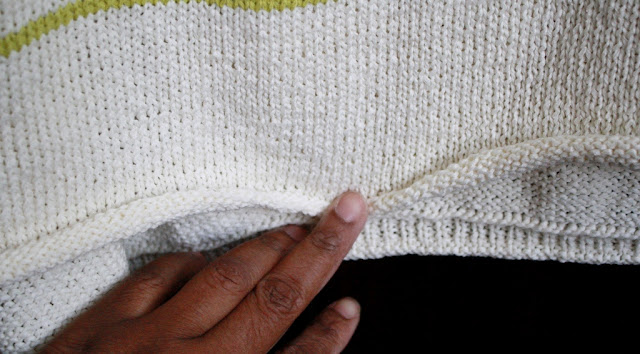 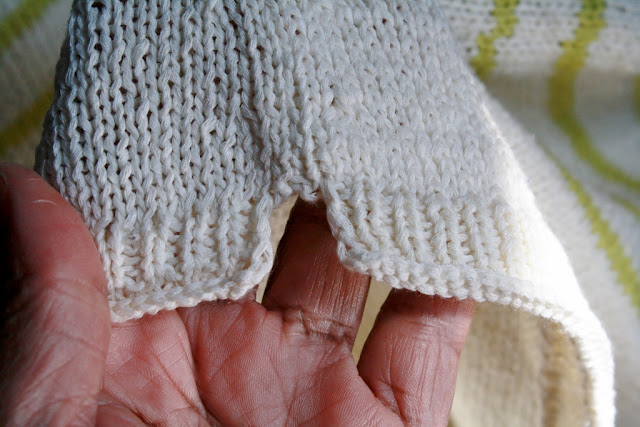 right off the needle, you can already  see the effect that bit of re-finishing had on those edges. 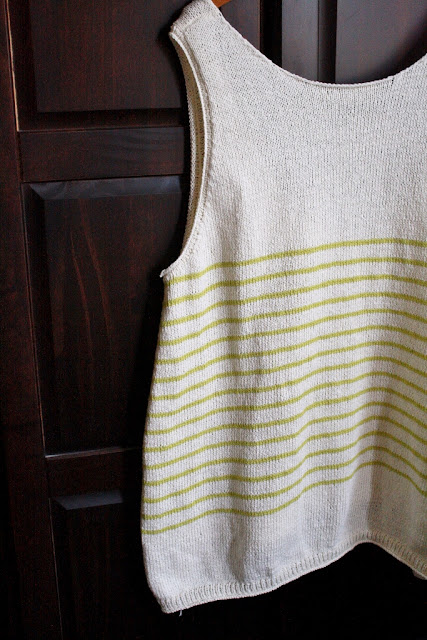 the top was given a soak previously, so i just gave it a blast of steam from the iron this time around to relax those new edges. 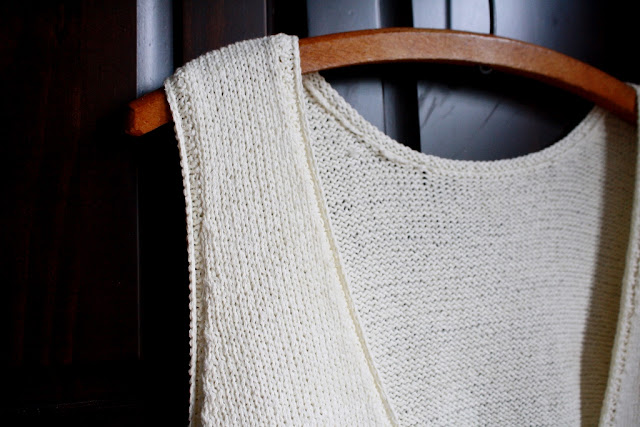 i love how neat that looks at the underarm. 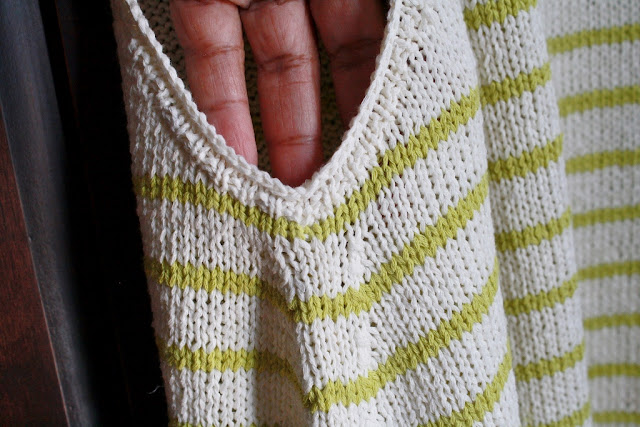 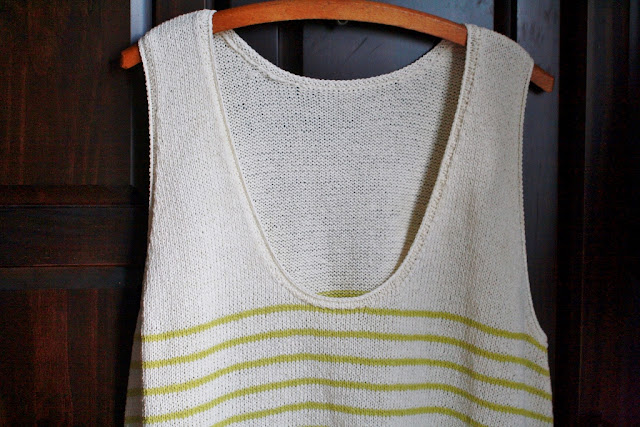 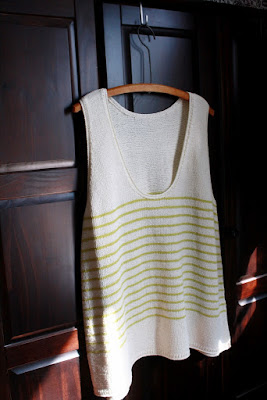 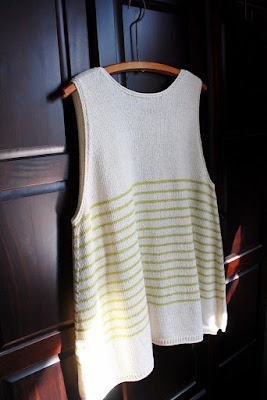