i woke up this morning from a spectacularly crazy dream. i was part of some sort of movie or television show, and instead of being given anything resembling directions... or a script... we were each handed a roll of gold coins and sent off on some wild goose chase. along the way, we blew up a banker (but it was okay, because he was corrupt), shot an accountant (again, it was okay because he was also corrupt), and set fire to a businessman who was in the midst of bragging about how much money he makes by bribing corrupt politicians and lying about everything. some other hijinks ensued, and i eventually found myself standing in the middle of a football field, with several media cameras in my face, screaming something to the effect of "i will not be intimidated by the corrupt politicians who are cheating and lying to the public"... when i finally awoke.

me: what the heck was that?

now, before you start thinking that i should be put on some sort of psych watch, or that i should cut out eating spicy foods before bedtime, it should be noted that we spent last night watching a Neil Breen film, and i fully expected said experience to taint my dreams.

me: watch i'm gonna have some sort of crazy dream about hacking into government computers and driving around the desert killing corrupt politicians and businessmen.
him:  probably.

for the uninitiated, Neil Breen is a Las Vegas architect/real-estate-agent turned actor, director, writer, producer, editor, location scout, set designer, makeup artist, and caterer of a series of self-funded feature-length films. it should be noted that i use the word "films" only in the sense that a video record remains. Hollywood has nothing to fear from this film-making lunatic genius.

i am not usually a fan of this type of nonsense, but my favorite animator has probably seen every B-movie ever made. his fondness for bad horror movies is the subject of a running joke around our home.

me: [pausing at the studio door to find him working on one monitor while some strange video is playing on the other one] what in the world are you watching?
him: it's called [clears his throat to put on his special 'bad movie title' voice] Blood Suckers From Outer Sp... [by which point i am already walking away].

it was inevitable that he would draw me into watching such things. specifically, i am enjoying the ones that fall into the "so bad it's good" category, but i draw the line at straight-up "horror and gore". he has already seen most of the "classics" in the "so bad..." category—movies like Birdemic, Samurai Cop, and The Room—but the Breen body of work was new to us both.

Breen has released four films, to date, with a fifth due out next year, and we watched them in the order in which they were released (more or less). first there was Double Down, which we absolutely had to see after he talked me into watching the side-splittingly-hilarious review of it by the guys from Red Letter Media in one of their "best of the worst" videos (NOTE: this video is not suitable for work, children... or my mother).

it should be noted that Neil Breen movies are the kind of thing that you prepare for watching by making sure that there is some form of alcohol in the house, otherwise, you may not make it past the opening credits. this is the stuff that you watch in the company of people who do not take most things too seriously. you know... people who are capable of a little thing called "fun". so, while my favorite animator is not a drinker (he does not like the taste), he has a finely-honed appreciation for all things that can be roughly defined as "absurdity", which describes every second of these films.

we were still shaking our heads in disbelief that anything could be so bad, so we followed it up a short while later with I Am Here... Now, which simultaneously made less sense and was more mind-numbingly terrible than the first one. having come that far, we eventually moved on to the next film, Fateful Findings, and this is where the Breen got to be a bit too much for either of us to handle. experience is usually cited as the best teacher of them all, but Neil Breen seems to have learned absolutely nothing by the time he got around to making movie number three. it was so bad, that we tapped out less than a quarter of the way in, and vowed that that was the end of watching anything "Breen".

then, about a week or two ago, we got to talking about his latest (fourth) film, so we decided to give it a shot. not only that, we started joking about all the "breenisms" you have to look for when watching his movies, and we kept coming up with so many of them, that we made a list. yes, there is an actual physical list (and that is his scratchy handwriting, in case you are wondering). the list is even coded. the circles were from Fateful Findings, and the squares were from Pass Thru. we may have to add a couple more symbols and re-watch the first two films with the list. 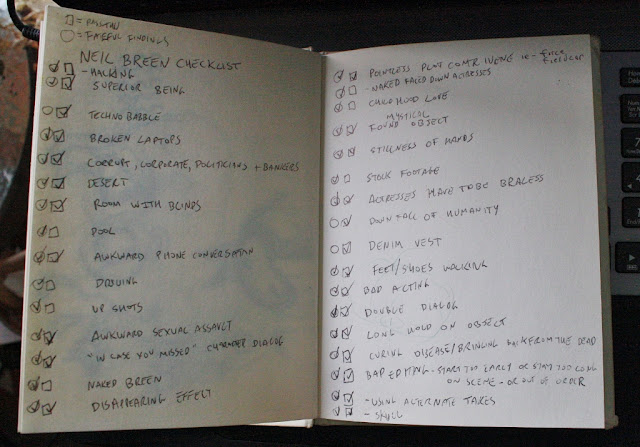 with that done, we sat down to watch Pass Thru. and, you know what? the Breen was back! it was bad, but like tolerably, watchably, laughably bad. we had to pause frequently to debate whether or not certain scenes fulfilled one (or more) of the criteria from the list. then there were all the times we had to pause just to laugh at how terrible it was. it was that bad good.

so, there we were last night, trying to agree on a movie to watch together, when i made the fatal mistake of suggesting that we owe it to ourselves to go back and watch Fateful findings all the way through. so we did. i poured myself a glass of wine (the first of a few), while he tracked down the list and a pen so that we could keep proper score. we paused, and laughed, and commented until well past three in the morning, before finally going to bed. and that, ladies and gentlemen, is how you find yourself experiencing a night of sleep with Breen in your head. it could have been worse though, as i could have found myself dreaming of a naked Neil Breen.

oh, in case you are curious, i will include the full text of the list down below. however, i would not suggest turning it into a drinking game, or you may need your stomach pumped by the twenty-minute mark of any of his films. sweet breens, everyone.