[full disclosure: i am going to attempt a week of daily posts in order to distract myself from... well... myself. wish me luck.]


there is a studio somewhere in Montreal, filled with assorted animation-type-individuals who i am holding collectively responsible for the three... yes, THREE... bouts of cold/flu that have swept through our place in the past two months. trust me. that lot is entirely to be blamed.

no exaggeration... at any point during the last three or so months, someone either had a cold/flu...

studio crew (to Sick Person #1): that's a nasty cough. why didn't you work from home today?

or someone was in the process of coming down with a cold/flu...

studio crew (to Sick Person #2): that's a nasty cough. you should probably work from home tomorrow?

you may have noticed that they said the very same thing to Sick Person #1 the day before, and look how that ended.

then there is Person #3. (s)he is not sick, but their significant other is at home coughing up half a lung on account of the cold/flu.

so, uhm, yeh. i hold that lot completely responsible for all the misery i have been through of late. they are serving as some sort of experimental incubation station, and the innocent bystanders... like me... are left to question why we seem to be coming down with the same cold/flu over and over again.

no exaggeration, we had our New Year's Eve meal during the last week of January. it looks pretty tasty, no? 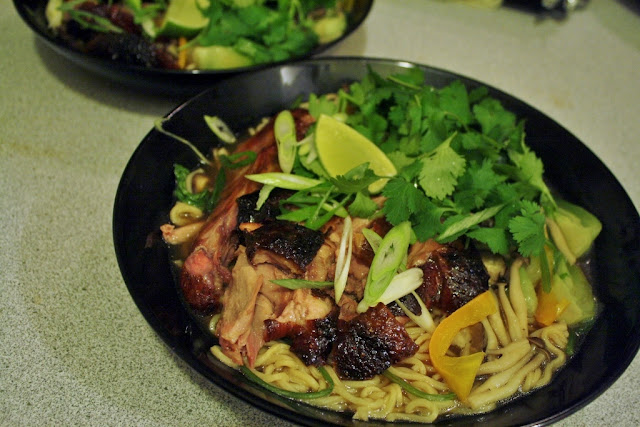 why did we wait so long, you ask? because of the cold/flu. it hit us both right before the New Year, then it took its time leaving. it is more than six weeks later and we both start coughing like crazy if we laugh a bit too hard. sheer madness. so, our usual New Year's Eve special meal was delay for a whole month.

and what did we have for this much-anticipated meal, you ask? something very similar to our New Year's Eve meal from the previous year, i reply.

we had declared twenty-eighteen the "year of eating Asian". or, to be more precise, the "year of cooking Asian". the objective was not to simply spend money on takeout or restaurants, but to learn to make some of our favorite dishes in our own home. and we kicked last year off with an attempt at char siu.

there were many more adventures outside of our usual cooking comfort zone. the objective was to practice making some of our favorite foods that were not already part of our culinary repertoire, and we were surprised at how easy it was to make a lot of the foods we usually get from our favorite Asian restaurants. so, when twenty-nineteen was approaching, we decided to do more of the same.

i should pause here and state—for the record—that i had no delusions of producing anything as ambitious as an authentic Peking duck in my apartment in Montreal. i just wanted a really tasty slices of roasted duck that would be perfect to serve atop a steaming bowl of veggies and noodle soup. so we got a duck....

i had already marinated the duck, but when it became abundantly apparent that neither one of us would be able to stand up for more than a couple minutes at a time (much less, to cook a duck for a New Year's Eve meal), we shoved it into the freezer for some other day... which finally arrived almost a whole month later.

i forgot to take a picture of the first step, but the duck was marinated using a paste made with ginger, garlic, honey, hoisin sauce, and assorted dry spices, which were rubbed all over the duck. it was meant to stay in the fridge overnight covered in said paste, but it ended up wrapped up tight, in the freezer, for a few weeks... still covered in said paste.

some weeks later... it was placed back in the fridge to defrost for a day, then i poured hot water carefully over all of the skin (which washed the paste away and tightened up the skin). it was pat dry and returned to the fridge to sit uncovered for a whole day. and that is when i remembered to grab my camera. 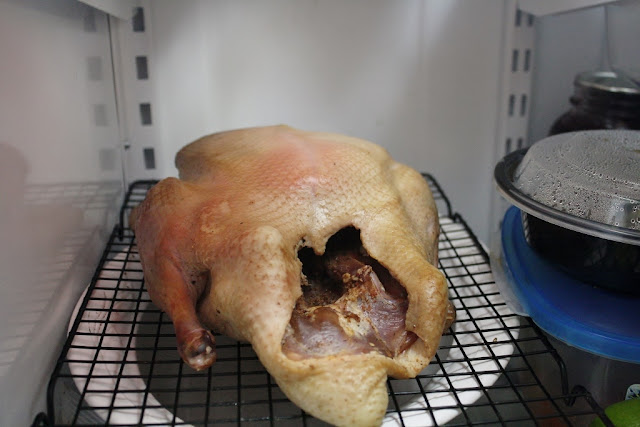 it was removed from the fridge about twenty-four hours later, at which point the skin was dry to the touch. this is a crucial step in trying to achieve that perfect roasted skin. 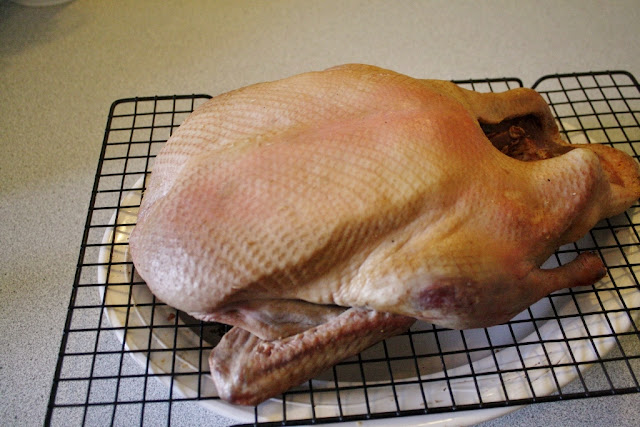 i shoved a few slices of ginger and a scallion into the cavity of the duck, then closed it up using a bamboo skewer. 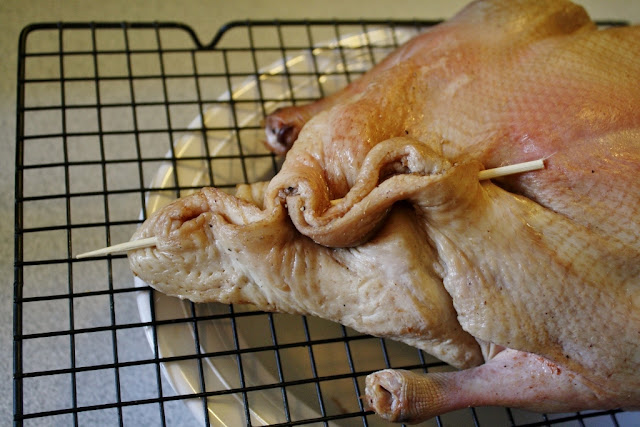 next, we made a thick glaze of honey, salt, pepper, and a dash of smoked paprika. we put smoked paprika in everything around here, it is that good. 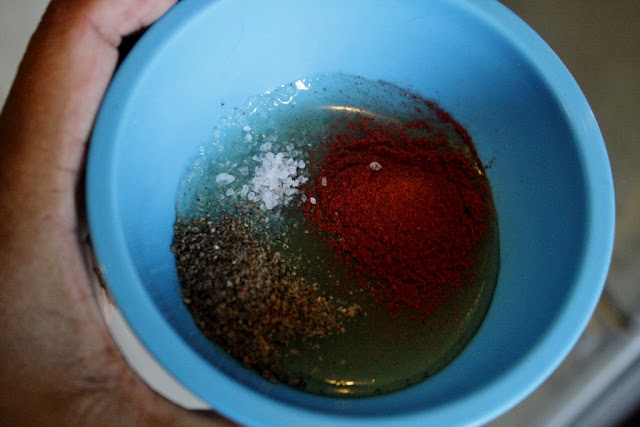 this mixture was heated very briefly in the microwave, just enough to warm up the honey so it could be spread easily in a very thin layer. 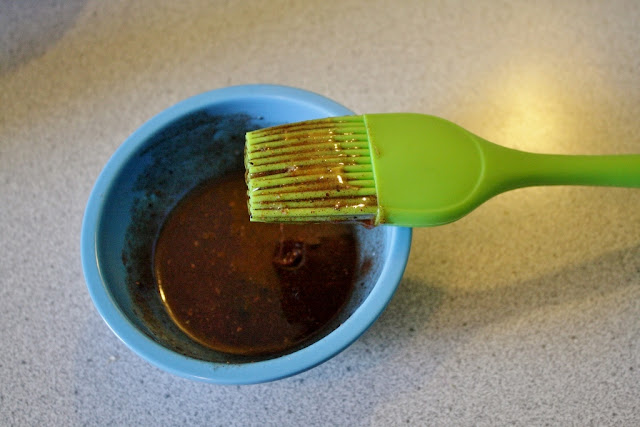 that mixture was brushed all over the skin of the duck... 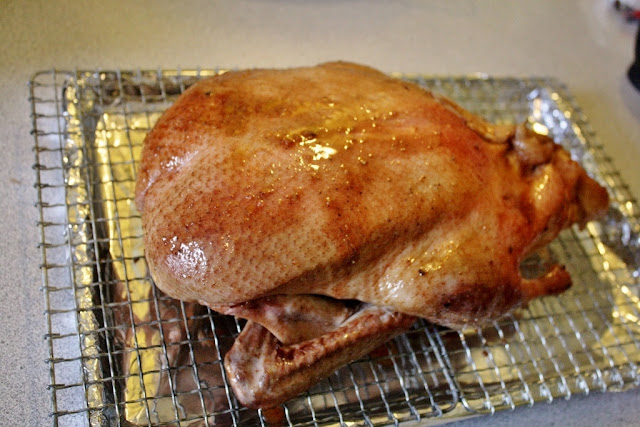 note that it was placed on a rack over a baking tray (so the hot air could circulate around the whole thing).

finally... into the oven it went until it looked like this. 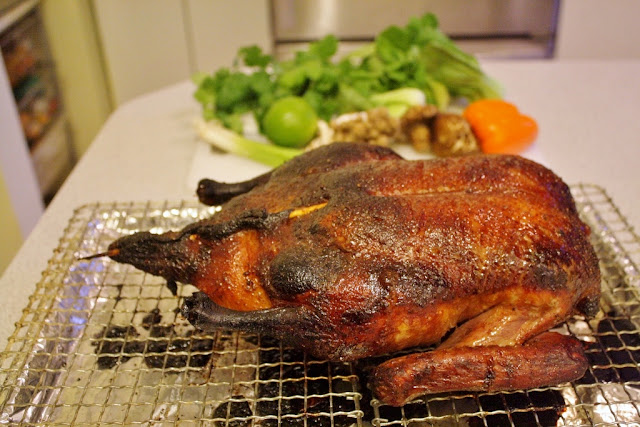 we prepped lots of veggies to make a quick noodle soup while the duck rested... 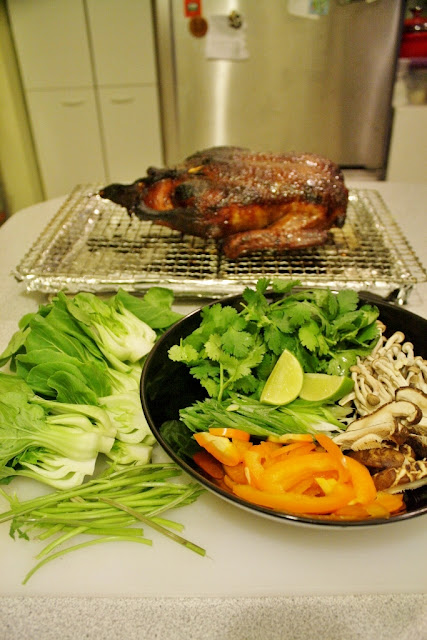 then it was time to start slicing. 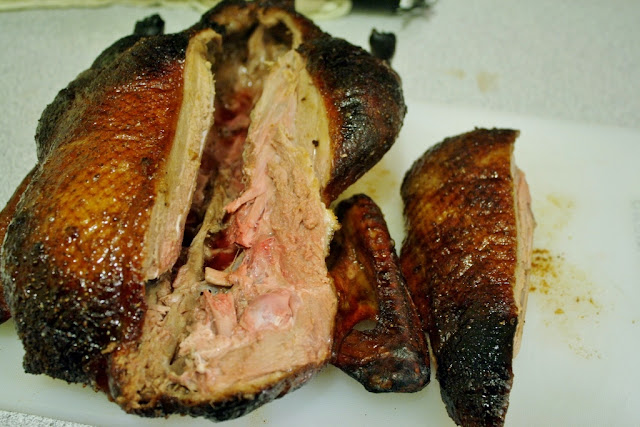 i do not possess the greatest carving skills, but i managed to make it work. 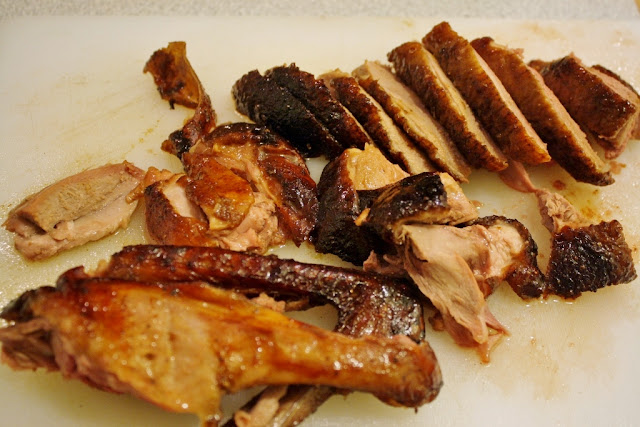 so, we topped our noodles and veggies with slices of freshly-roasted duck. 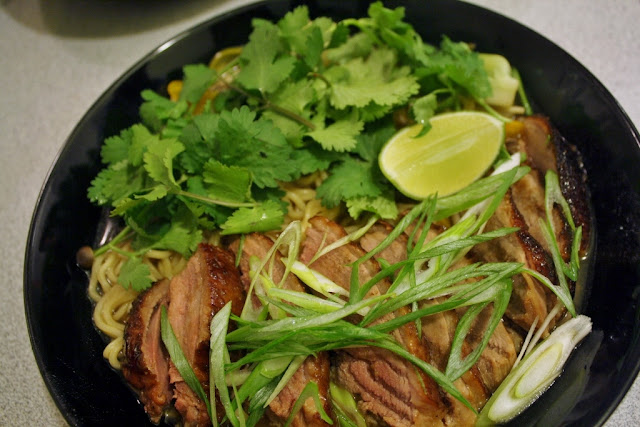 and that was when the year finally began in our home.