wayyy outside my comfort zone ...

i feel like i am risking ruining my carefully-curated curmudgeon character by saying this out loud, but i have been making clothes for Barbie dolls. pretty much. 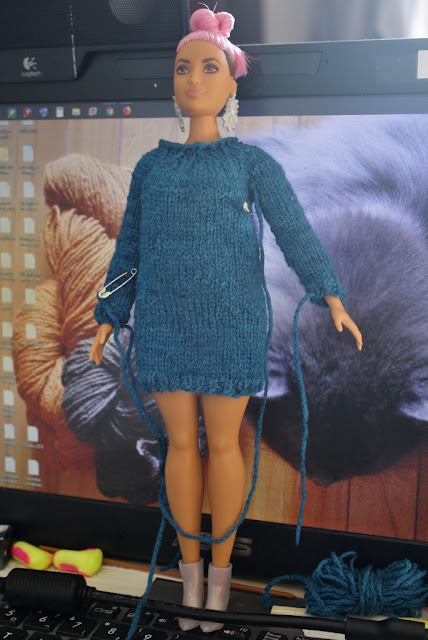 you see the shocked expression on Mama Kitty's face? that is exactly how i felt when this all started. 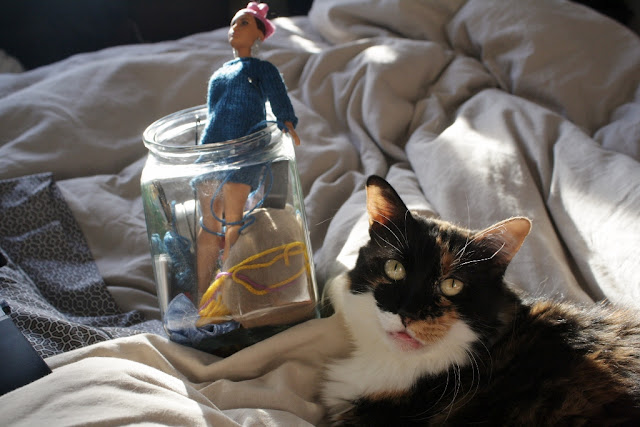 there is a whole (long) story behind it, but i will have to save that for some other day. for now, just know that i may have officially lost what little there was left of my mind. please... send help.

on the more immediate side of life, i woke up this morning, looked out the window, and the only thing i could see was the brick wall and chimney of the building directly across the driveway from us. everything else was lost in a white haze.

it should be noted that when i talk about looking out "the window", what i mean is that i looked out the only window that is not currently frosted over with a solid sheet of ice. check out the view through the sliding glass doors. Montreal is somewhere out there... i hope. by midday, i was super-curious as to what it looked like down at street level, so i decided to get a large pot of soup started, then take a trek out to my local yarn shop while it simmered. the yarn shop, i should point out, is literally around the corner, so it was not like i had to hitch up a team of huskies to drag me on a sled across the tundra. it is a short walk to the corner, cross a street, then walk to the middle of that block.

i even managed to talk him into going outside with me.

me: come on. we can see what the snow looks like at ground-level. and you can help me pick out colors of yarn.

he made a face.

me: plus...plus... we can go to the bakery on the way back, and sit there sipping hot beverages while we watch the cars and people slipping around on the ice.

then the wind began to howl again, and the snow went racing even faster sideways past the one non-frosted-over window. it was quickly decided that as i was still getting over the tail-end of a nasty cough that has been driving me bonkers for most of the past month, this may not be the best time to go venturing out into an ice storm. that almost makes sense, i guess.

he did, however, take a quick trip to the corner store to buy eggs and cat food. the eggs were needed for a bit of baking we were planning on doing later in the day, and the cat food was a sensible precaution. i am aware that my cats have me listed as an all-you-can-eat buffet in their emergency contingency plan, and i did not want them to get any ideas with this storm.

he came back in a short while later, looking completely shocked.

him: you know when you see videos on the weather channel of those really big Winter storms? the kind where the snow is blowing like a hurricane, cars are skidding all over the road, and people are slipping and falling on their butts as they try to walk?

beyond that, we live on a street that is so small and tucked out of the way that people who have lived in this area for decades usually look puzzled when we try to explain where it is. this pretty much means that it will likely be mid-week before the city remembers to come dig us out.

how am i staying sane in all of this cold, grim weather? how sweet of you to ask. i am knitting myself a sweater in a very not-me shade of orangish-yellow yarn. trust me... the photos do not fully capture the intensity of this color. 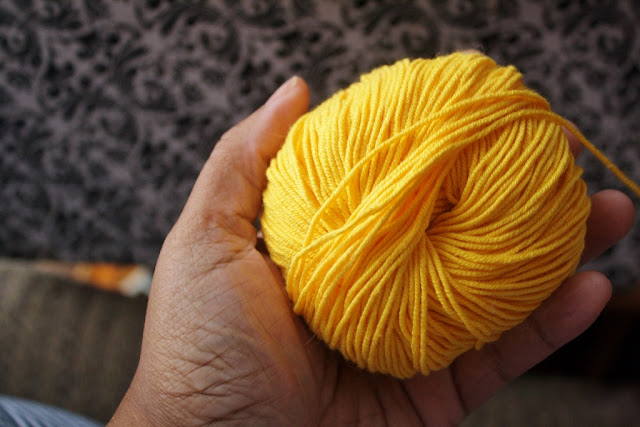 anyone who has ever met me in the flesh would know this color is wayyy outside my comfort zone. i was trying to decide between the many shades of grey in my stash. however, as it is currently the depths of Winter in a place that seems to be continuously competing to be labeled as the coldest, darkest spot on the planet, i decided to make my own sunshine.

the pattern is the Gloria sweater by Danish designer Signe Strømgaard. like i said... it is a not-me color, but i have to admit that it does look rather fetching next to my skin. 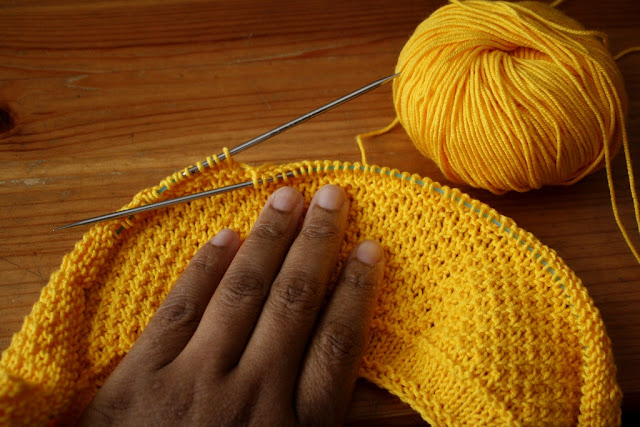