i recently learned one of the oldest magic tricks in the world. it is the one where the guy (or girl) reaches into his pocket and pulls out a handkerchief, but there is another handkerchief tied to it, and another one... and another one. you get the idea. this goes on for an hour or so, unil you hear the musical ta da, and the audience awakens to find the magician standing there, holding a rope of kerchiefs longer than the Great Wall. well, i have mastered said trick. except in my version, the rope of kerchiefs is replaced with a meter (a yard or so) of yarn, and instead of pulling it out of my pocket... i am pulling it out of a cat's bum. ta da!!!

the bum in question belongs to Baby Bear, the grey, long-haired lunatic of our furry twosome. this cat exists in a near-constant state of getting into trouble, and i knew something was wrong when i went to feed them that morning, and she did not show up to nip impatiently at my legs while i opened the can. i found her in the studio, under a chair, in a dark corner, and i did not notice the end of the orange string dangling below her tail until i stood in front of a mirror with her in my arms. naturally, it had to be some of my own precious hand-spun yarn, which he and i dyed during one of those sleepless nights when i was busy being disappointed in the world.

my favorite animator was fast asleep during the magic show, but he (literally) laughed until it hurt when i recounted the story later that day.

introducing the newest member of our nuisance. this is Cordelia ("Cordy"), our intensely energetic Little One. 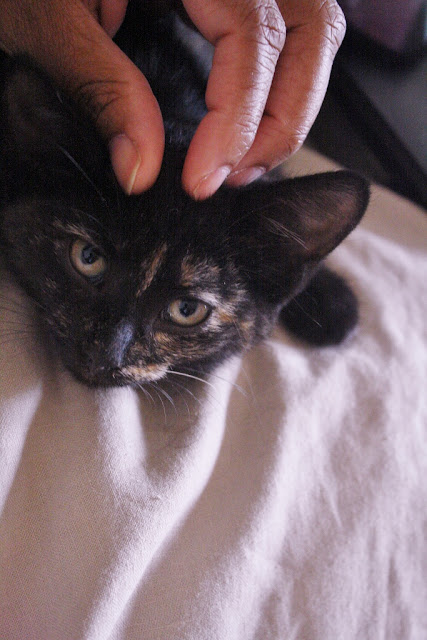 she was part of a litter of one his parents' (many) cats had near the end of the Summer. she came to us at about two months old, and, never having cared for so young a kitten, i was equal parts intimidated and enchanted by her tininess. he took this little ball of fur out of the carrier, and laid her against my chest... whereupon, she crawled into the collar of my shirt, and fell fast asleep nested in my cleavage. that kind of behavior usually results in resignation from elected office, but she was a baby, so i gave her a pass. she may have also taken a tiny poo while in said space, but i was far too busy falling in love to hold a grudge.

she likes running and jumping and knocking stuff over, especially at like three in the morning when we are trying to sleep, and she recently discovered that sitting in a flowerpot makes bird-watching even more fun. 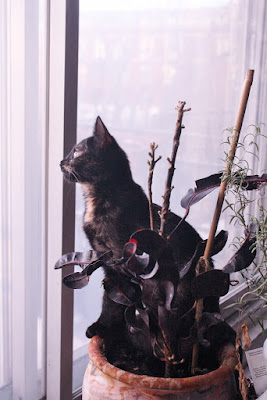 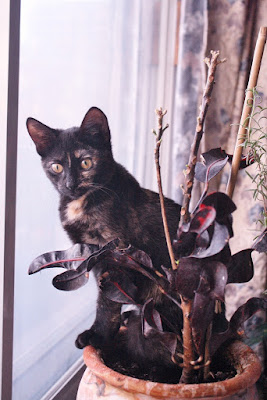 when her battery runs out, the Little One likes to spend most of her time curled up on the furry brown lap blanket on my favorite sofa. this has led to a few minor heart attacks, as it is sometimes difficult to see where the cat ends and the blanket begins. to avoid having to explain a crushed cat to the vet, i have adopted a policy of "feeling before sitting", especially in low light. seriously... she looks just like the blanket. 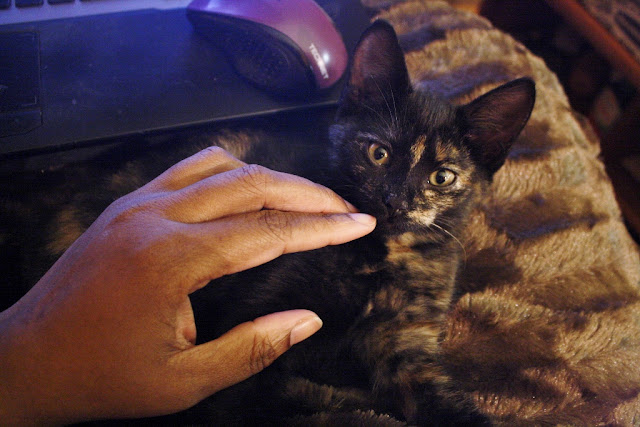 my cats are  all girls, and all named after Shakespeare characters. Cordelia joins Ophelia ("Philly"... a.k.a. Baby Bear... a.k.a. Yarn Bum), seen here bird-watching from the comfort of a basket of clean laundry. she does these things just to hurt me. 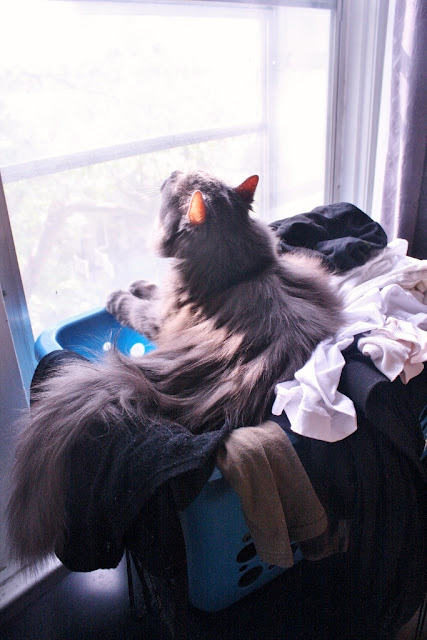 then there is our calico grand dame, Titania ("Titty"... a.k.a. Mama Kitty... a.k.a. Drooly McDroolDrool). if there is such a thing as a spirit animal, then this cat is definitely mine... minus all the drool. while the other two are running around, perfecting their parkour skills and causing general mayhem, she sits in a quiet spot, pondering thoughts the depths of which would leave Archimedes confused. to a casual observer, this is just a cat lazing atop a box, but you actually caught her on the brink of disproving Newton's second law of motion. take that, momentum! and i wonder why the cool kids never invite me to their parties. 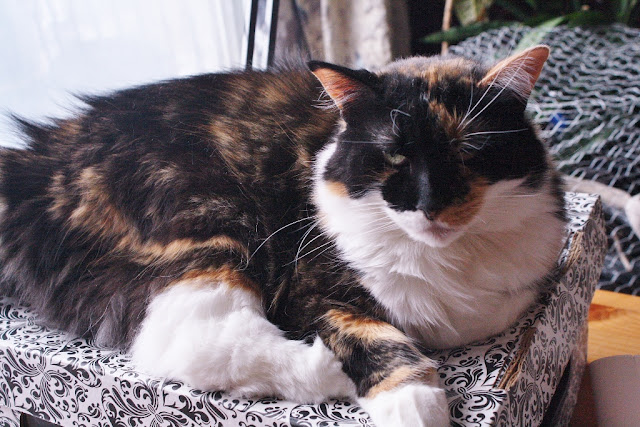 i fully admit that three cats may be one cat too many for our space, and while i threaten daily to trade one (or all) of them in for a plastic bag of goldfish, they really do bring so much happiness to our home. i even made a special Christmas gift random-Monday-in December treat for them in the form of an 8-inch clay pot planted with cat grass. 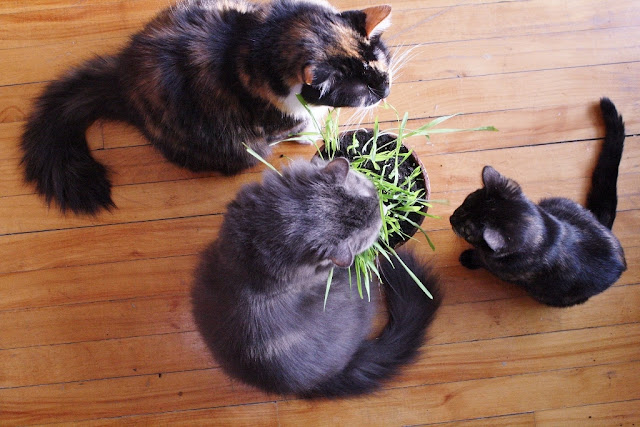 it is like eating spaghetti without using your hands. i think they approved. 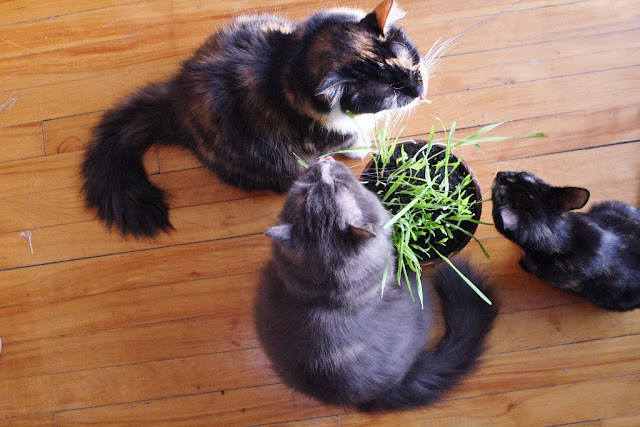 see the "unamused" look on Mama's face? that is pretty much me... all of the time! seriously, we could be twins. 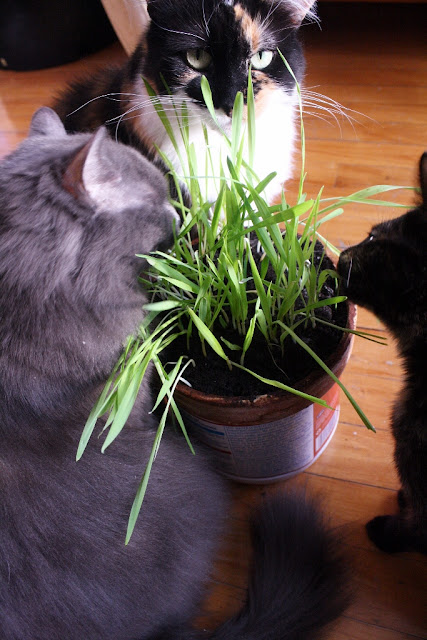 Email ThisBlogThis!Share to TwitterShare to FacebookShare to Pinterest
Labels: cat