[the post-a-week experiment seems to have derailed (yet again). i have no valid excuse, other than just not being in the mood—which, some may argue, is the only reason one needs to not do a thing. i will attempt to catch up for the missing entries in the coming weeks... if i am in the mood, that is.]


i am always amazed at how easily the body adapts to the changing seasons. it takes just one chilly evening and the pitchers of lemonade are replaced by pots of strong tea or you abandon thoughts of ice cream and daydream instead of a steaming mug of cider with its very own cinnamon stick. yes... it is Autumn, and i am so very very in my happy place. this was the view i woke up to this morning. see that? Autumn! 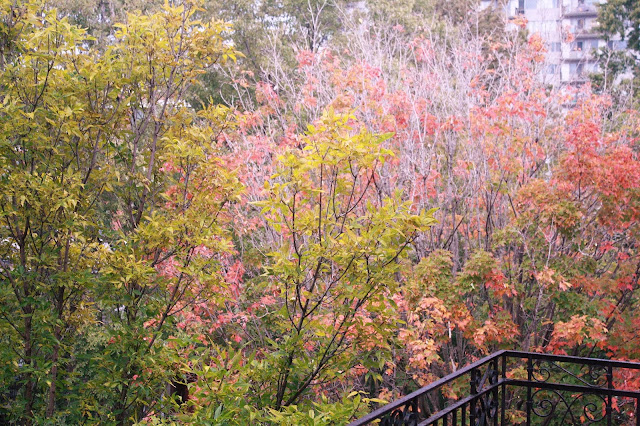 having spent most of my life in the NYC area, i am used to mild Falls and a lengthy display of seasonal colors on the local trees. that is definitely not the case up here in Montreal, where the transition from green leaves to bare trees tends to happen in the proverbial 'blink of an eye', often skipping right past the whole 'turning of the leaves part' of the thing, which (some may argue) is the whole reason you have Autumn in the first place. however, i am pleased to announce that as we move toward an unseasonably-warm mid-October, most of the leaves are still on the trees... and they are putting on quite the display.

inspired by the season, i pulled some of my own yarn from the stash and cast on a sleeveless cardi that will be a great around-the-house layering piece come Winter. 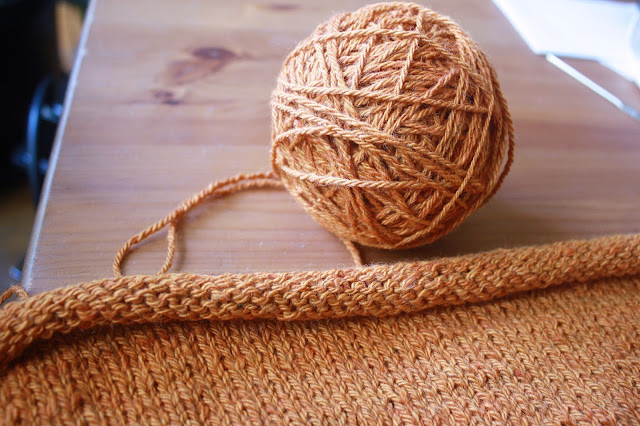 this yarn began life in our home, some two years ago, as a Shetland-BFL fleece, before being washed, blended with alpaca fiber, spun, and dyed. the yarn is a bit "rustic" in places (which is a polite way of saying "i could not spin a consistent yarn if my life depended on it"). oh well. 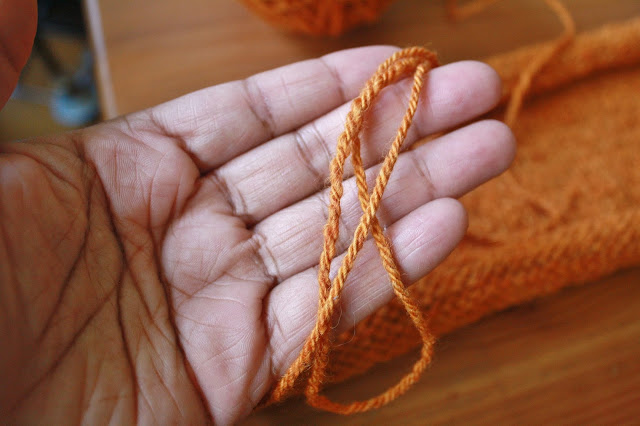 i usually shun colorful things, but it actually makes me smile to see this coppery-orange next to my skin. 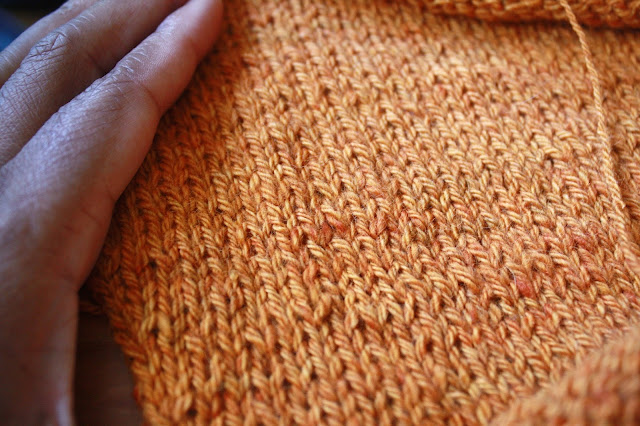 total aside: check out that giant ball of yarn next to Mama Kitty for scale. 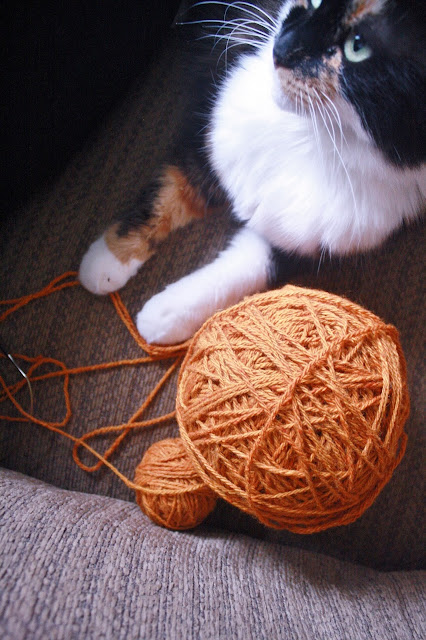 can you tell that she is really impressed? 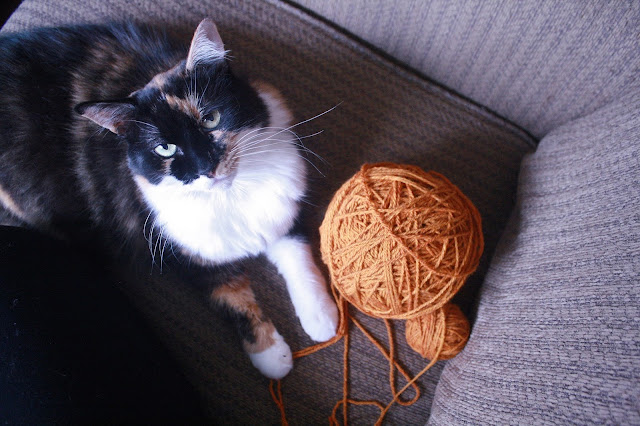 on the culinary front, the salad-heavy days of Summer have given way to what i like to call "Autumn food". last night's meal consisted of coconut-saffron rice topped with a spicy curry featuring super-locally-sourced potatoes! 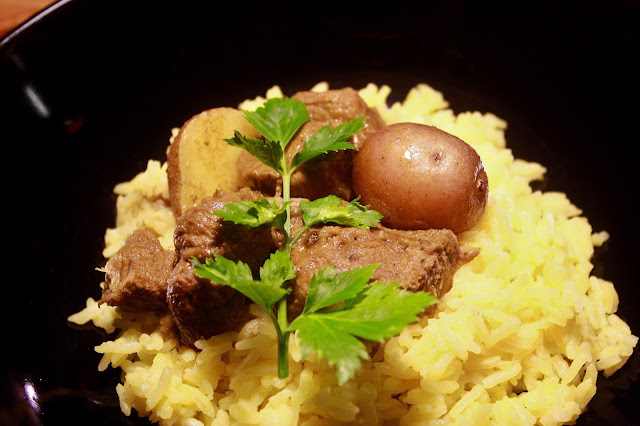 as in... the potatoes i grew on the balcony!!! luckily i had no delusions of going the self-sufficient route, as this yield was enough for one meal with leftovers for the next day. potato growers of Quebec can sleep soundly knowing that they have not lost me as a potential customer. here is my modest haul of red potatoes, fresh from the soil bag. there were also a few large baking potatoes, but i am saving them for some other meal. 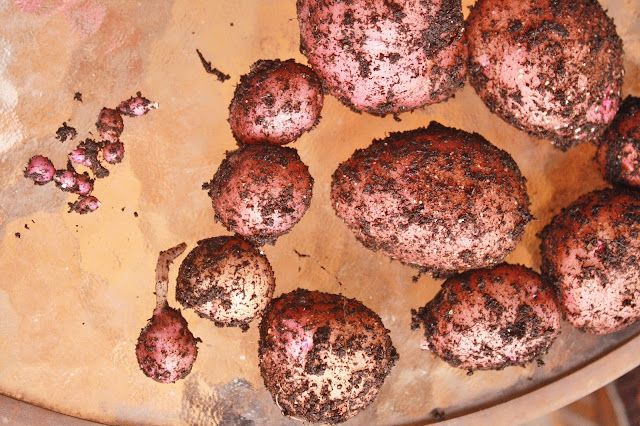 i was having so much fun with the harvest, i even collected all the wee ones. cuteness overload. 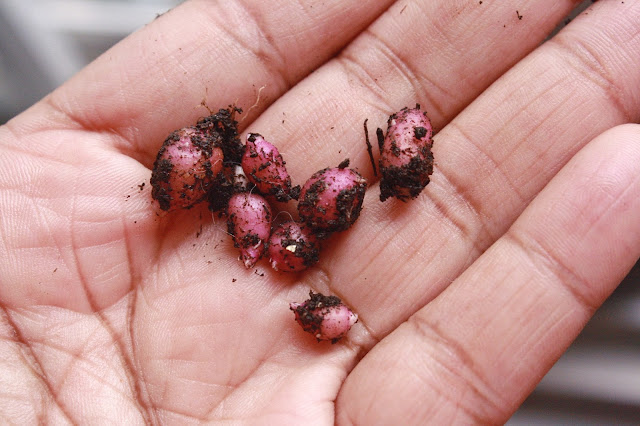 they were placed (unwashed) into an empty ice cream container (cause i am fancy like that), where they remained (uncovered) for over a month before ending up in last night's meal. 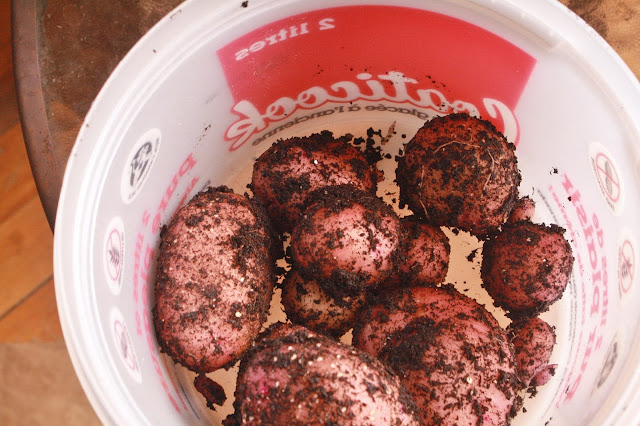 i studied my favorite animator's face as he took his time chewing the first bite, while i (im)patiently awaited some comment on the meal (we tend to give most things the food-critic treatment... which is as absurd as it sound, but we are easily amused). he got through the first mouthful without a word and was working on the second bite as i sat there drowning in a sea of anxiety. how was it? did i go overboard with the spices? too much salt? not enough salt? could he detect the hint of thai basil or the (equally-locally-sourced) green onions? for the love of all that is holy... please say something!!! finally, he spoke:

him: wow! our potatoes are amazing!
me: and the rest of the curry...?
him: oh, that's delicious. but, man... those potatoes!

i lifted the fork to my mouth and took a bite. man... those potatoes!