on the third day of Christmas...

life does not always rhyme. get used to it.

i think it's fair to say that i am over the worst part of this cold. however, as he got sick almost a week before me, and he is still coughing quite frequently, i know it is going to be a bit of time before the last of it is out of my system. oh joy!

this really sucks, as i was looking forward to us being able to spend some time doing totally pointless stuff together during this week. we are catching up on the Marvel films i/we missed—which required starting over from the beginning, as my OCD would settle for nothing less.

we were also considering taking a drive out to visit a wildlife park about and hour outside of Montreal. it is one of those places where you drive through the grounds, and you are encouraged to bring carrots to feed the animals that come up to your car. we went there during the Summer (i will talk more about that in a few days), and we wanted to see how the place looks during the Winter. that will have to wait till my lungs are up to inhaling sub-zero air again.

the one thing i was most looking forward to though, was a visit to a shop right here in Montreal that sells supplies for making things like soap and candles. i can easily order those items online, but i wanted to go sample their full range of fragrances, so i can finally get around to making some scented candles of my very own. he even agreed to help with the sampling and the candle-making. however, choosing scented oils would prove quite difficult just now, especially with the tissue shoved up both nostrils and three solid days of breathing only through my mouth. such an attractive picture, i know.

so, he abandoned me for a couple-few days. he is off having winter-time fun with the nephews, and i... well... i am working my way through an impressive amount of tissues and over-the-counter cold medicine.

then there was that other thing i had hoped to get done during this week. i finally have all the pieces completed to put together the Bright Star blanket i was slow-knitting for the past two years. cat sold separately. 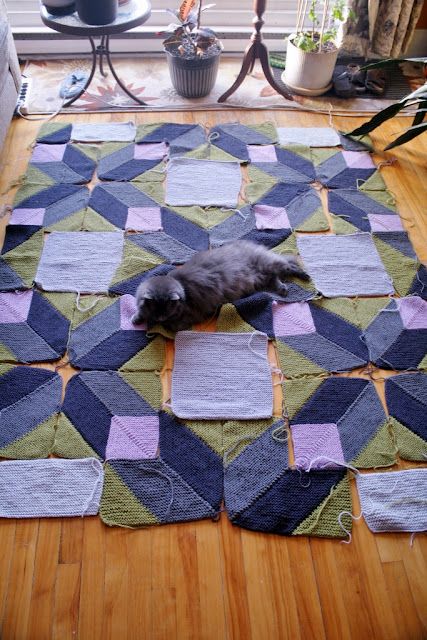 the second i finished arranging the last piece, she showed up out of nowhere, and plopped herself down smack-dab in the middle of the thing, and she absolutely refused to move. i finally convinced her to shift far enough so i could get a picture of the center of the motif. ta da!!! 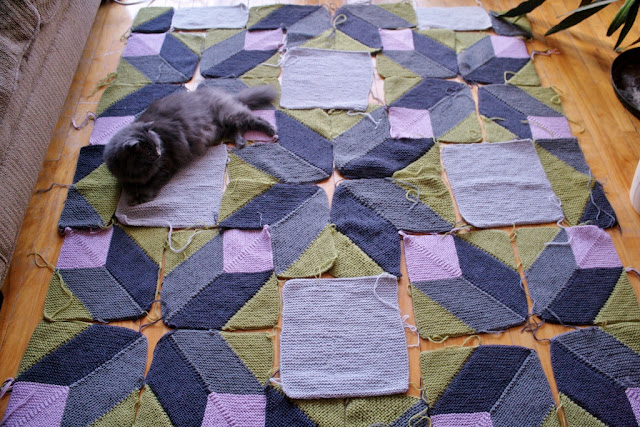 then i realized that the top corner pieces needed to be switched around, so i sorted that bit. ta da (for real this time)!!! 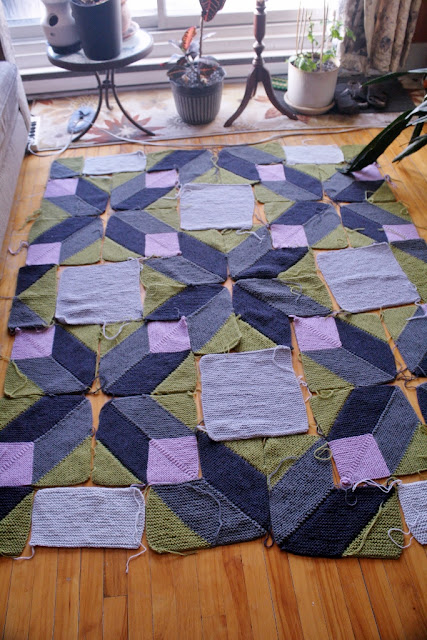 it is going to take a whole lot of patience, and a lot of alcohol, to assemble this thing, and i was hoping to get that done while we were watching stuff together this week. instead, i am wrapped up in bed, alternating between pulling the covers over my head because i am shivering, and tossing them aside because i am burning up. but i can sorta-kinda taste again, so i guess that is something to be happy about.