two days in, and i am already a day late in my attempt at a week of daily posts. in my defense, i had half of yesterday's post ready to go, then something unusual happened. i fell asleep, and stayed that way... for seventeen hours. sleep has been my nemesis since birth, so i have to take advantage of these moments when they come. where was i in my fibery tale? oh, yes... forgetfulness. how incredibly appropriate.

my creative juices were flowing after completing the glowing fuschia tee. i was swept away by fantasies of hand-crafting every garment i will wear for the rest of my life. my Ravelry to-knit queue exploded overnight, and i was binge-watching sewing videos on the You Tubes, all in search of inspiration to fuel this new lifestyle. you know... total delusional insanity, or something of that type.

still reeling from the realization that you are allowed to knit with cottony yarns, i rounded up all of the Spring and Summer magazines in my collection, and took the opportunity to revisit some of the items i had been meaning to make for a long time, finally settling on the Bailiwick Pullover (by Courtney Spainhower), which was featured on the cover of Interweave Knits, Spring 2014. i then went searching through my stash for a season-appropriate yarn to use for said project, and that is when things got weird. 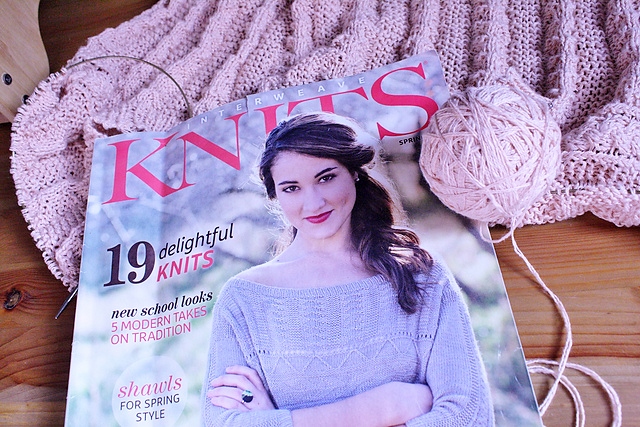 seems i actually made this one before. no kidding. all that was missing was the sleeves. i fully admit to being a bit forgetful at times, or even a bit scatterbrained (my favorite animator usually refers to it as loopiness), but this was borderline insane. seriously... how did i manage to forget having knitted all of this? 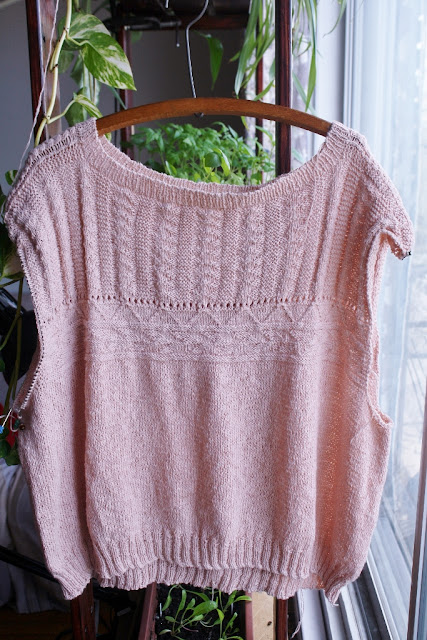 i even had a project page on Ravelry for the thing, complete with photos of my progress, and tons of notes i made along the way. that photo with the cover of the magazine? that was from when i started making it, plus there were many more. like this one... 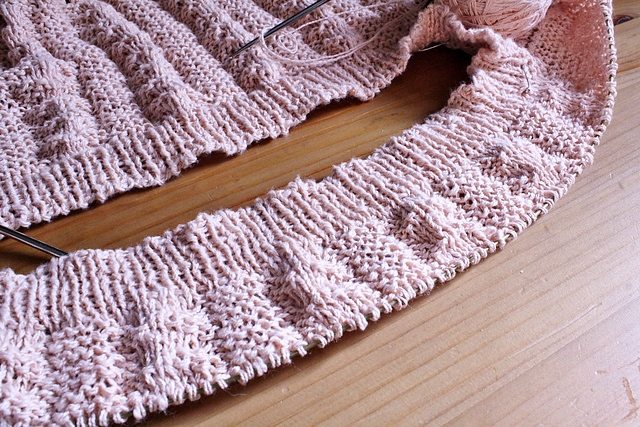 and this one. and i had zero recollection of any part of it until i went searching for yarn to (re)make the very same top. talk about being loopy! 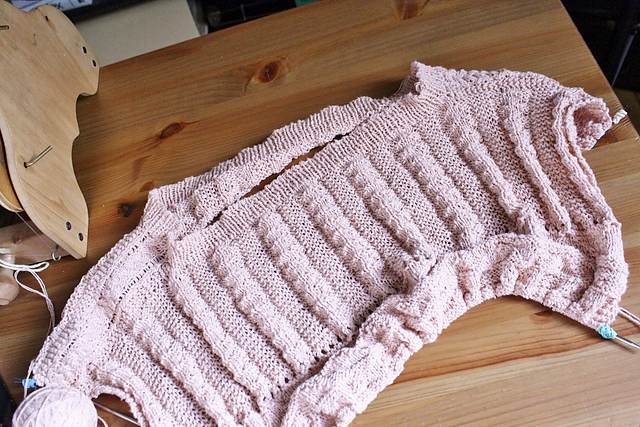 i even had the stitches on the needle ready to make the first sleeve. note my very hi-tech use of rubber bands to keep the stitches from sliding off the needle. clearly it works, because this top was languishing in my stash for the past THREE YEARS!!! no joke, i started this one on May 24, 2014, and finished it on May 12, almost three years later to the day. 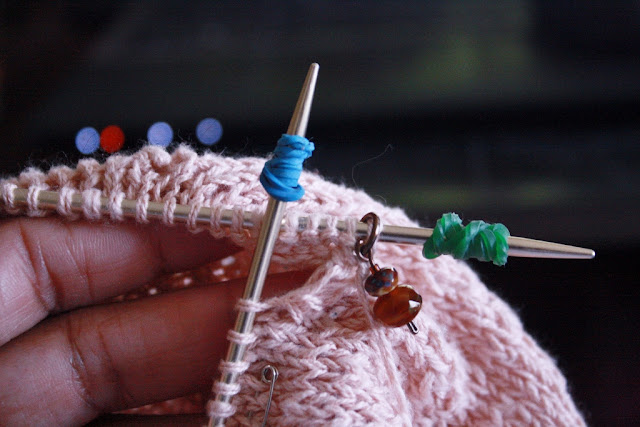 i am ashamed of how little work it took to finish this one. two very short sleeves later... 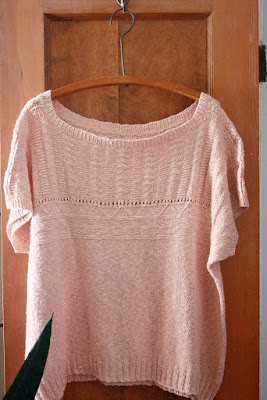 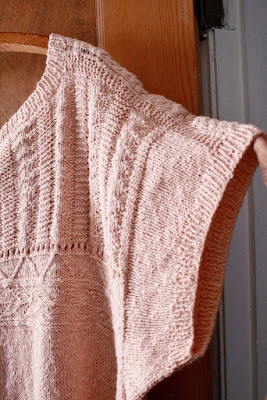 and i had a new top. 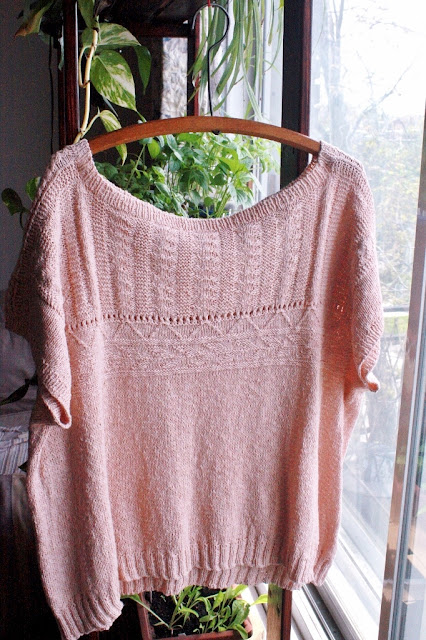 this is a take on a guernsey/gansey (depending on who you ask) sweater, which refers to the textured pattern incorporated into the fabric of the garment. 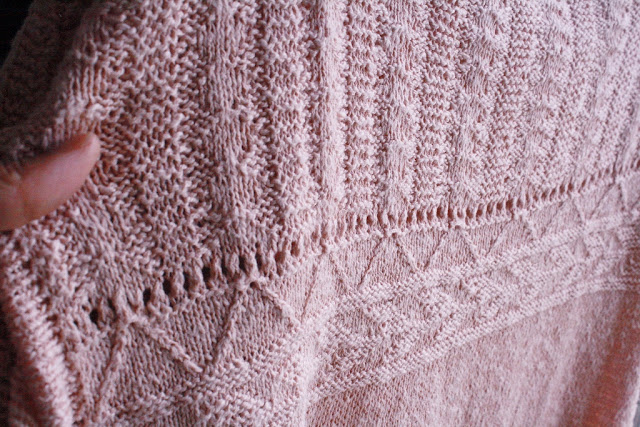 this style of patterning originated in the northern British isles, where such sweaters were traditionally worn by seafaring men, and they were usually made with either white or navy blue yarn. regional variations in the designs were relied upon at times to identify the bodies of fishermen that washed up to shore... or so the legend goes. morbid though it may seem, it was a practical measure in a part of the world where so many people's livelihood depended on such a dangerous sea.

my top, however, would prove most useless in the frigid North Sea. this modern take on the traditional gansey was intended for warm(er) weather, so it was designed for a lightweight yarn, and features a row of lacy holes (to allow the garment to "breathe" i am guessing) and bracelet-length sleeves. mine was made out of a Summer-friendly cotton/acrylic blend in a color i am calling light-salmon... which is just another way of saying pink. i also opted for short sleeves, mainly because i wanted to get it done quickly... you know... after forgetting it existed for a whopping three years.

i am especially fond of the narrow cable that runs along the top of the shoulder and continues down the sleeve. 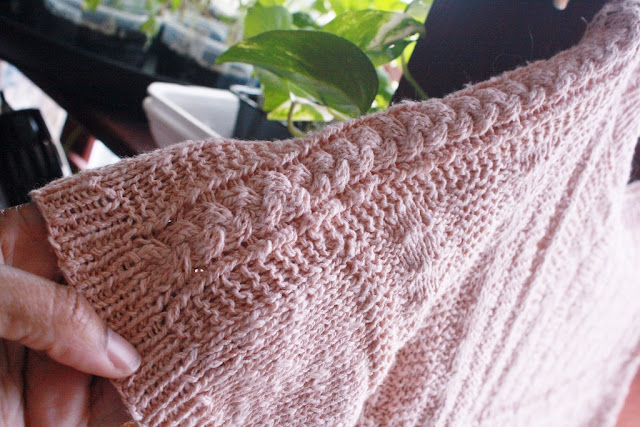 i have been on something of a cables kick of lately. there is a cardigan in progress sitting next to me, which features an array of cables that might make a sane person's eyes bleed. i will save all the exciting details for when said garment is done. this one should take less than three years... hopefully. 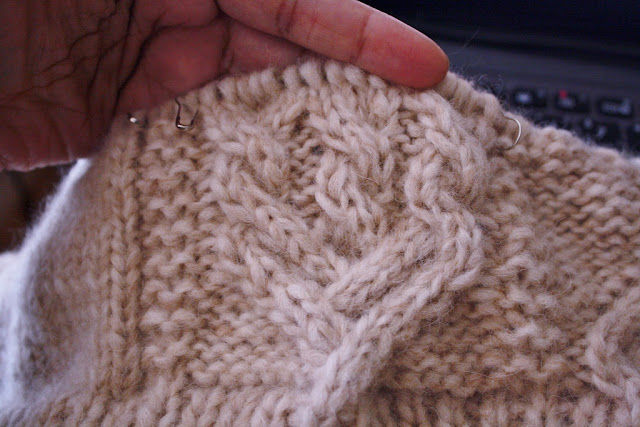