curse of the mummy...

the balcony garden project seems to have turned into the all over my living room garden project. the weather climbed to 19°C (66°F) last week, and we debated shifting the plants outside, then a cold front arrived and it plunged down to -4°C (25°F), so it looks like the first of the squash blossoms will indeed bloom indoors. beyond that, our furry little neighbors have been running recon missions, taking note of the growing sea of green on the other side of the glass. i really do not want to get kicked out of Canada for beating a squirrel to death with a half-eaten zucchini, so perhaps it is for the best that they stay put for the foreseeable future. 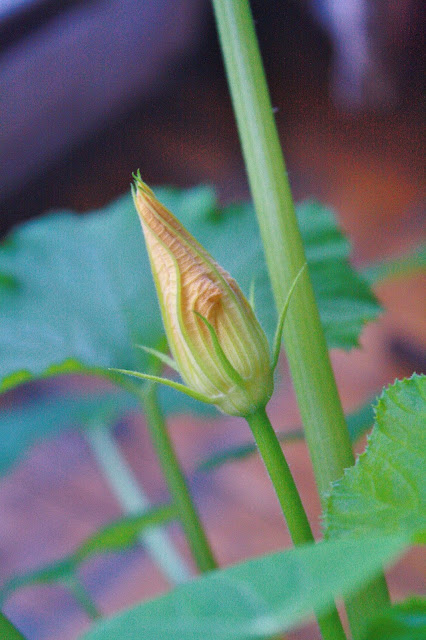 my seasonal obsession with tulips is coming to an end. i purchased one last orange bunch today, but i was far more interested in the withering petals on last week's blooms. 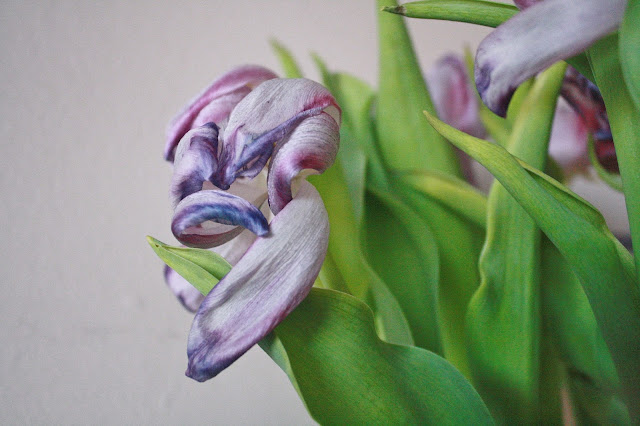 if you study them long enough, beautiful figures begin to emerge. this one looks like an elegant pair of  flamenco dancers, and the one above looks like a cunning cobra. do you see it? 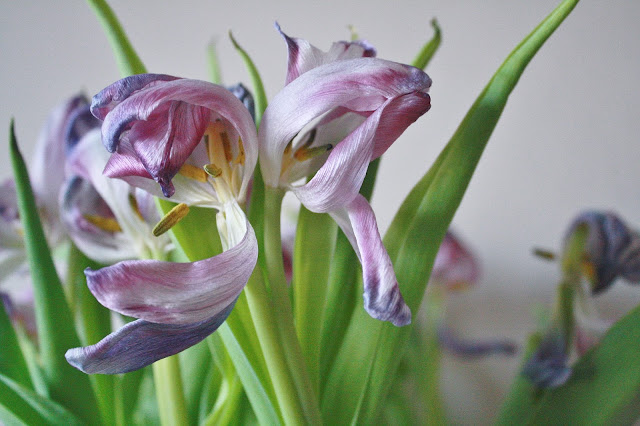 in the always-exciting world of feline shenanigans, mama kitty has found a new way to combine her two favorite activities. laying around... 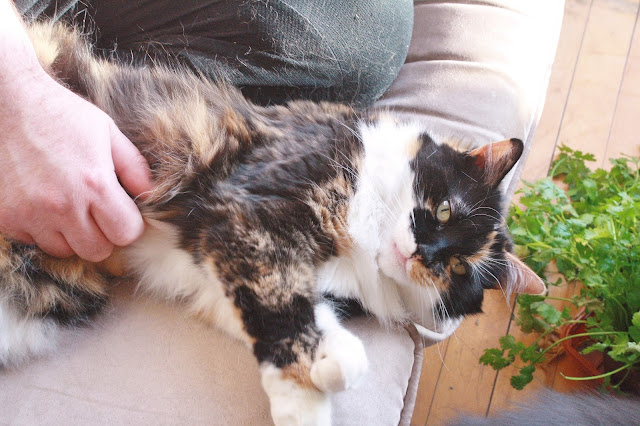 and watching the little one get into trouble... 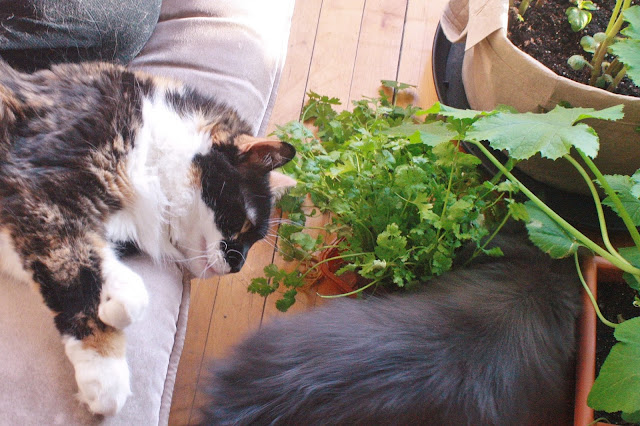 which is really easy to do since the little one lives to get into trouble. she seems to think that this is her personal jungle. can you spot the fierce and mighty hunter in her favorite nap spot? 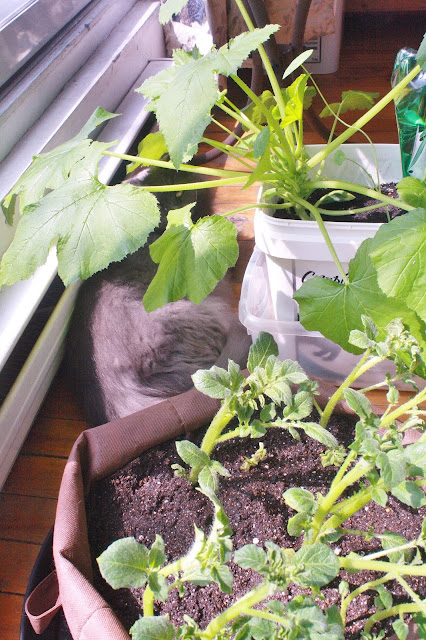 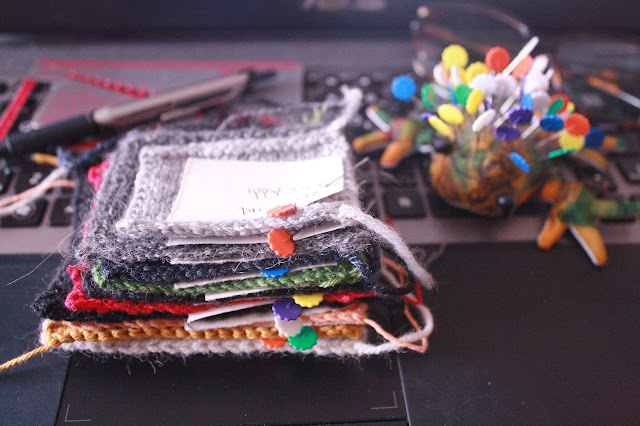 i also (finally) got around to some of the podcasts on my 'watch later' list. after sifting through the cringe-inducing antics of the mutual admiration society, i found one or two gems that i intend to watch regularly. the real joy, however, came from my sample knitting. any activity that requires yarn and rulers and measuring and math and reorganizing needles by size (and brand... don't judge me!) is near-nirvana for my special type of OCD. 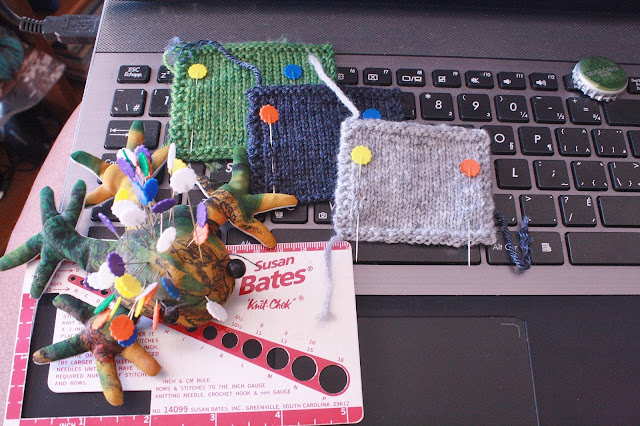 the best part comes after you wash them. highbrow knitters may pull out fancy equipment for blocking their damp swatches. i grabbed a utility knife and cut a flap from the nearest cardboard box. ah, simplicity! 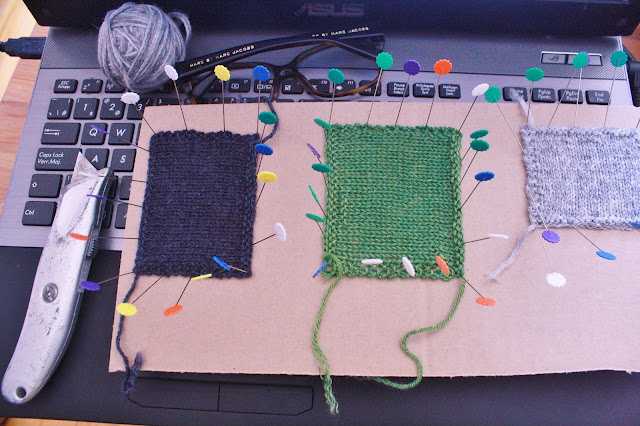 some swatches involved knitting the same fiber on different sized needles to compare the finished fabric... 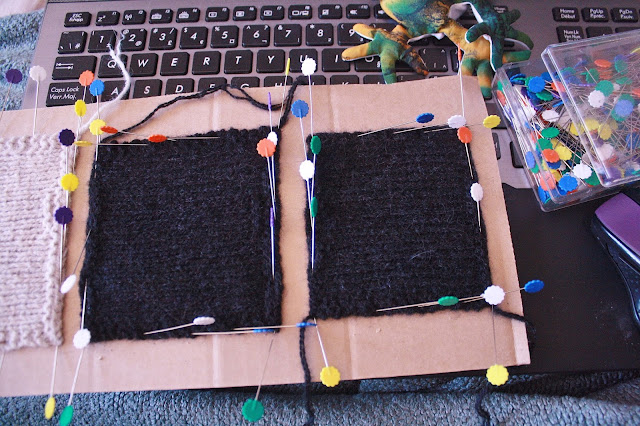 while other swatches involved knitting the same pattern in different yarns to see which best suited the desired project. 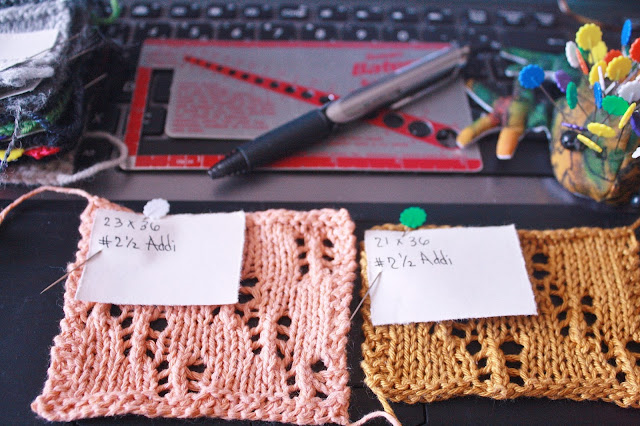 [total aside regarding my notes-to-self: those numbers on the first line refer to the stitch x row count in a 10cm x 10cm (4" x 4") square, and the second line is the size (and brand, as they tend to differ ever so slightly) needle used to knit the sample. i could explain in more detail how that relates to the finished garment, but that would require breaking out the laser pointer and putting on the librarian glasses, and nobody needs to be subjected to such things.] 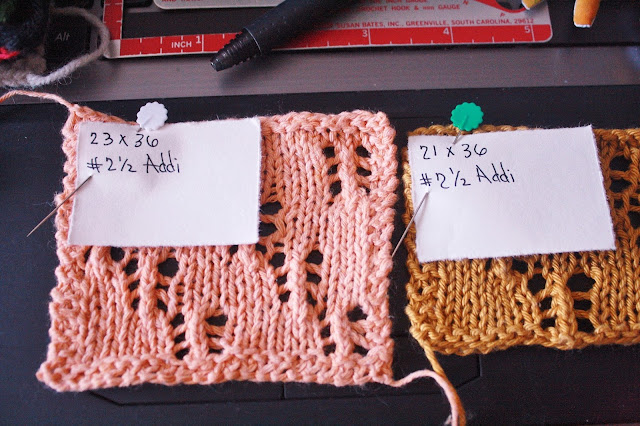 this is the lace motif from the Carta Cardigan, which has been near the top of my queue for the past three years. it is a perfect project for warm(ish) weather, but it does come with one major drawback. the pattern pdf (it is free, i am not breaking any rules) consists of two pages of diagrams with lots of numbers and a cover page with exactly three lines of instructions, which they refer to as "knitting tips". furthermore, the limited information only relates to the sample size, which is 36" across the bust—i laugh at 36" across the bust—so there was definitely going to be even more math involved. this, boys and girls, is why we drink and knit. couple-few adult beverages later, and i had redrawn the diagrams with two new sets of numbers, one based on the pastel yarn and one based on the gold yarn. i got a second opinion from my favorite animator. it went something like this:

me: which of these two swatches would be best for knitting this cardi [pointing to photo of said cardi on the screen]?
him: [taking a swatch in each hand and fondling them for a few seconds, then pushing one toward me] this one.
me: but.. it's the color of orange sherbet.
him: so?
me: that's like light salmon, which is almost as bad as pink. can you seriously see me in that color?
him: [holding the swatch up to my arm] what's wrong with it? that color would look really nice on you.

at which point, i fixed him with a look of utter disbelief, then picked up my needle to cast on a cardi in the mind-numbing shade of orange sherbet. 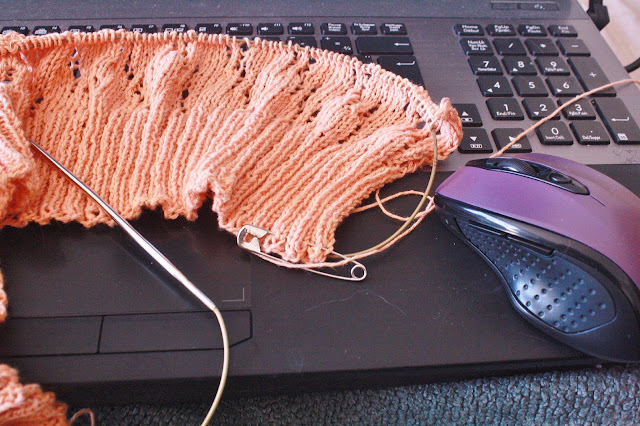 will this project make it to completion, or will i freak out and frog it in a pastel-induced panic? time will tell. 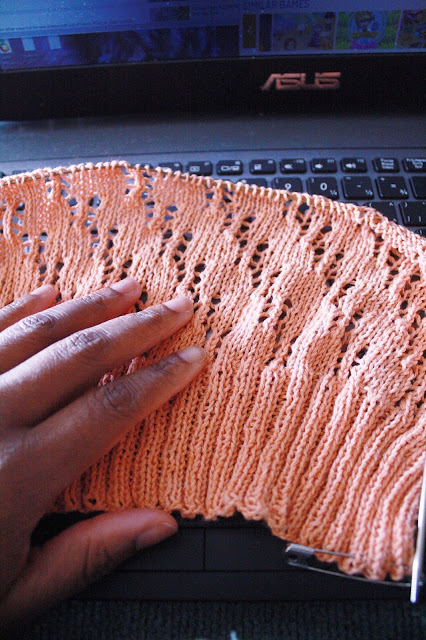 the simple lace repeat makes for a good movie-watching project. i even managed Masquerade (loved it, by the way) subtitled without dropping a stitch. i planned on enjoying a S. Korean period piece mini-marathon, but that proved harder with more action-filled films, so i resorted to watching Ancient Aliens [which only ever ends with me yelling at the screen after someone "proves" their point by drawing connections between things that have absolutely nothing to do with each other... or with the supposed "point" to begin with]. some folks exercise to reach their pain barrier, i listen to people using pseudo-science to explain pseudo-archaeology to reach mine.

which brings me to... [seriously, i do not plan these things, life is just self-referencing that way].

the trim around our kitchen window is in need of repair, so we spent a minute or two discussing options, before my favorite animator grabbed a hammer and pried a loose board away from the wall. what followed was a scene straight out of the annals of archaeology.

it should be noted that while i can handle regular dust (the stuff one encounters in day-to-day tidying), my latest nemesis seems to be what we like to call ancient dust. the stuff that accumulates atop a ceiling fan that has sat motionless for the past eight months? hazard! giving large sofa cushions the occasional thwacking? even bigger hazard!!! how do i know, you ask? learned it the hard way, i reply.

one minute we are chatting in the kitchen while he removed many rusty nails from the piece of wood, and the next minute i am swallowing large quantities of antihistamines and issuing a list of instructions, should a trip to the emergency room become necessary. i removed my long-sleeve shirt (everything feels like burlap made from nettles when i am in that state) and sat cross-legged on the sofa waiting for the pills to kick in. he sat across from me, trying his best to look sympathetic, but that only lasts so long when sarcasm is the default setting.

him: you're like one of those explorers who opens a tomb and dies on the spot. everyone thinks it's the curse of the mummy, which only serves to keep that legend going. i bet if they went back and checked, they would discover that all those archaeologists had allergies. there was no curse. it was the ancient dust that killed them.

at which point, i laughed till i fell over sideways, then i watched a video of a man trying to catch a duck with a device that was surely patented by one Wile E. Coyote, which resulted in even more laughter, and that proved to be the best medicine of all.