i think i've been putting off composing a new post until i could hold up the old MISSION ACCOMPLISHED banner next to the image of a completed sweater all ready to be sent off in the mail.  guess what! it's July and rather steamy in this city set on a small island in the middle of a mighty river.  seriously... who puts a city on a tiny island in the middle of a gigantic river??? it's like standing on a piece of carrot in a boiling pot of soup, so all activity that requires sitting around with my lap covered in bits of wooly jumpers have been suspended until the weather starts to cooperate.  so, naturally... i went and purchased two dirty fleeces that have to be washed in copious amounts of near-boiling water then rinsed (possibly multiple times) in equally-hot water.  what can i say?  addictions can be so very hard to break. 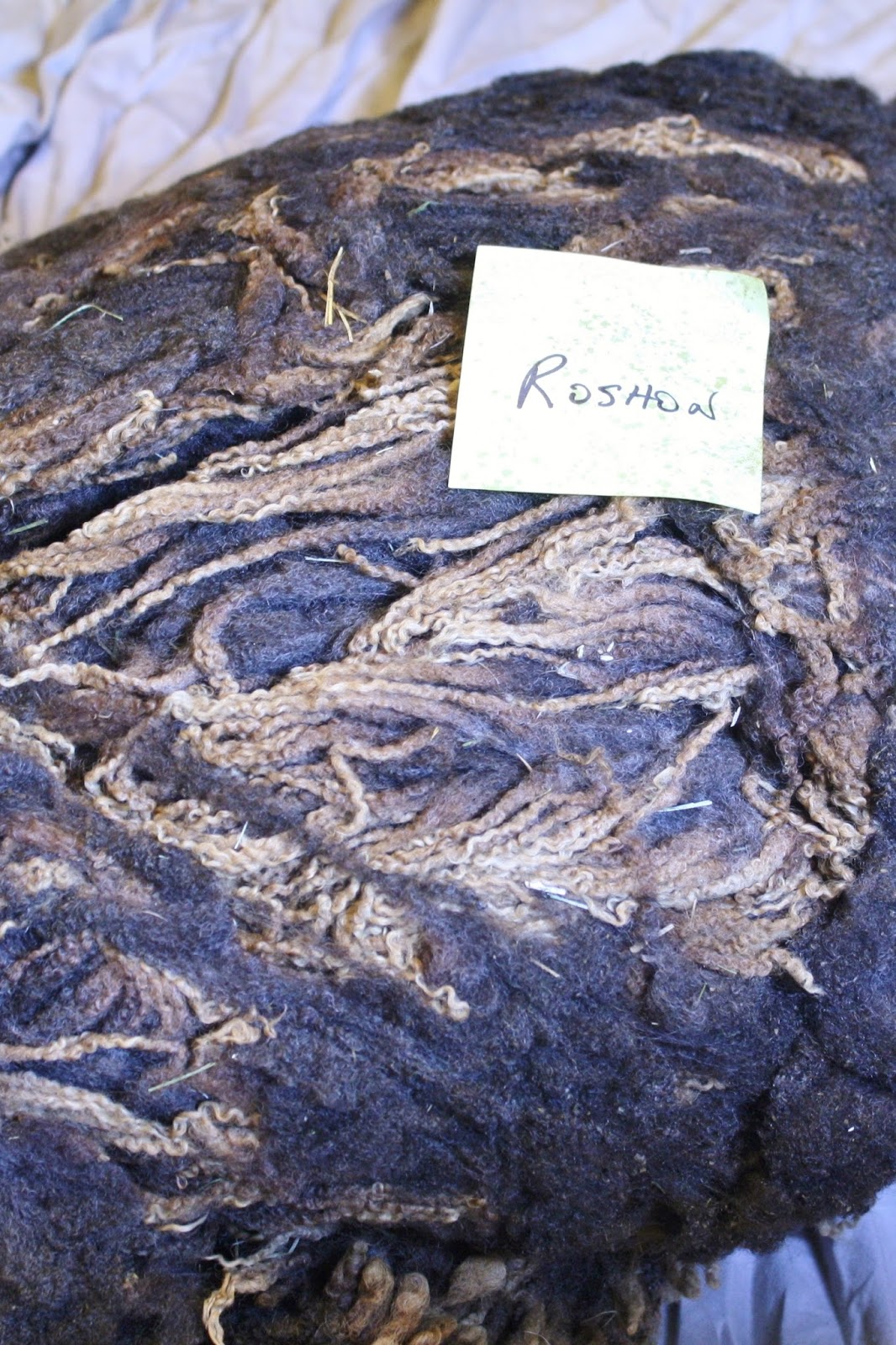 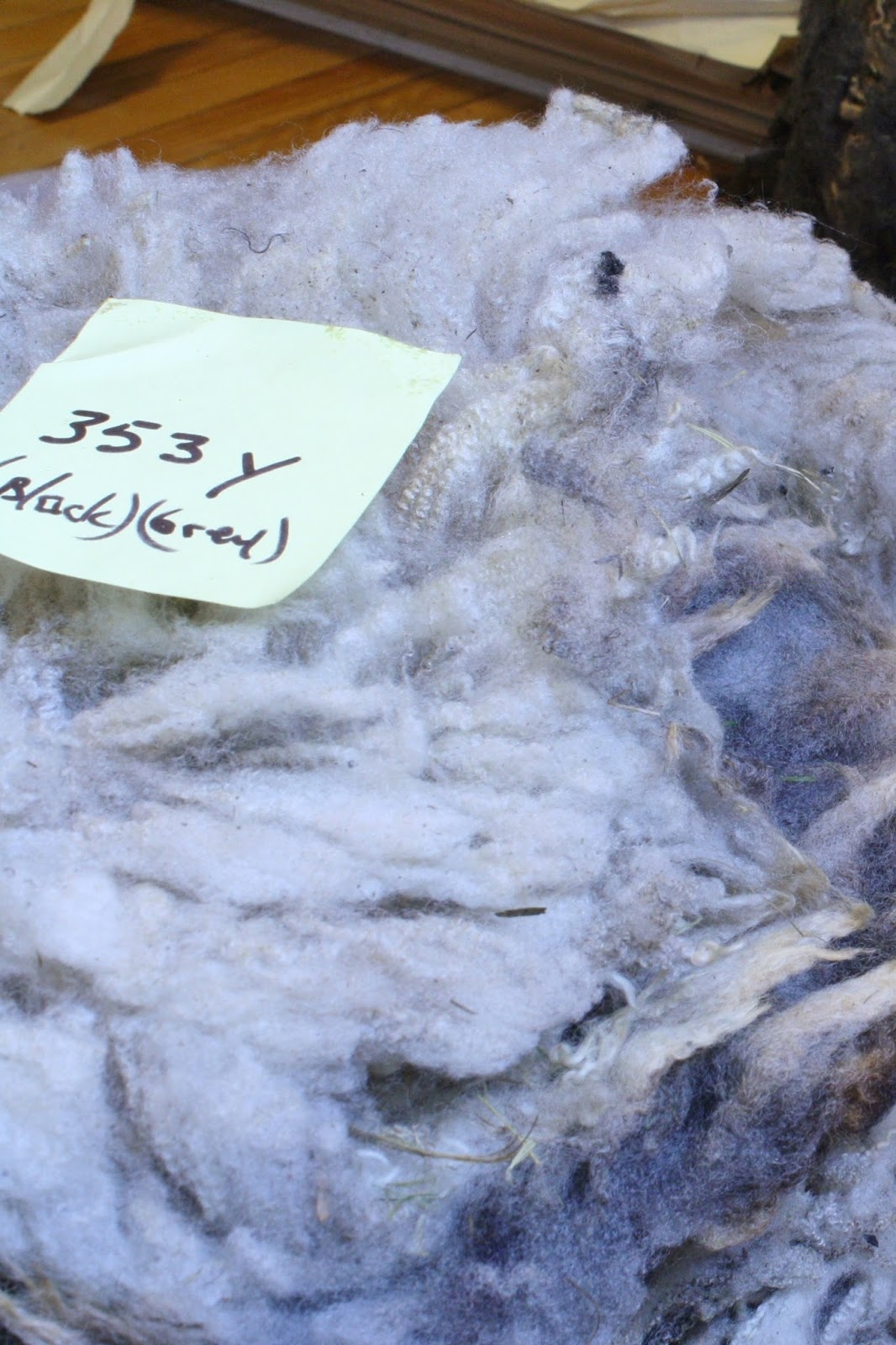 i will likely discuss said items in great detail when i get around to spinning them, but i am like a kid with a new toy, so i have to say a little something about these two beautiful fleeces.  they were purchased from Little Smoky Natural Fibres (thanks, again, Rory and Jody... and happy retirement!). this is the last year they'll be selling fleeces, so i was extra lucky to get in touch with them when i did. the flock and fiber business will go on under new management, so i hope to have a steady farm-direct source for the foreseeable future.

this was my first time venturing into the world of natural-colored fleeces.  i am hooked!!! the white/silver/grey fleece is a Shetland-BFL cross, while the other one (the brunette with the sun-bleached tips) is a straight BFL (Shetland and BFL are breeds of sheep, in case that part wasn't clear).  i selected these two fleeces because of their color(s) and the fineness (softness) of the wool.  i tore open the box and grabbed a small sample from each bag. this is dirty wool (it smells like sheep and happiness, and, yes... i do realize how not-normal that sounds, but it is my happy place)... 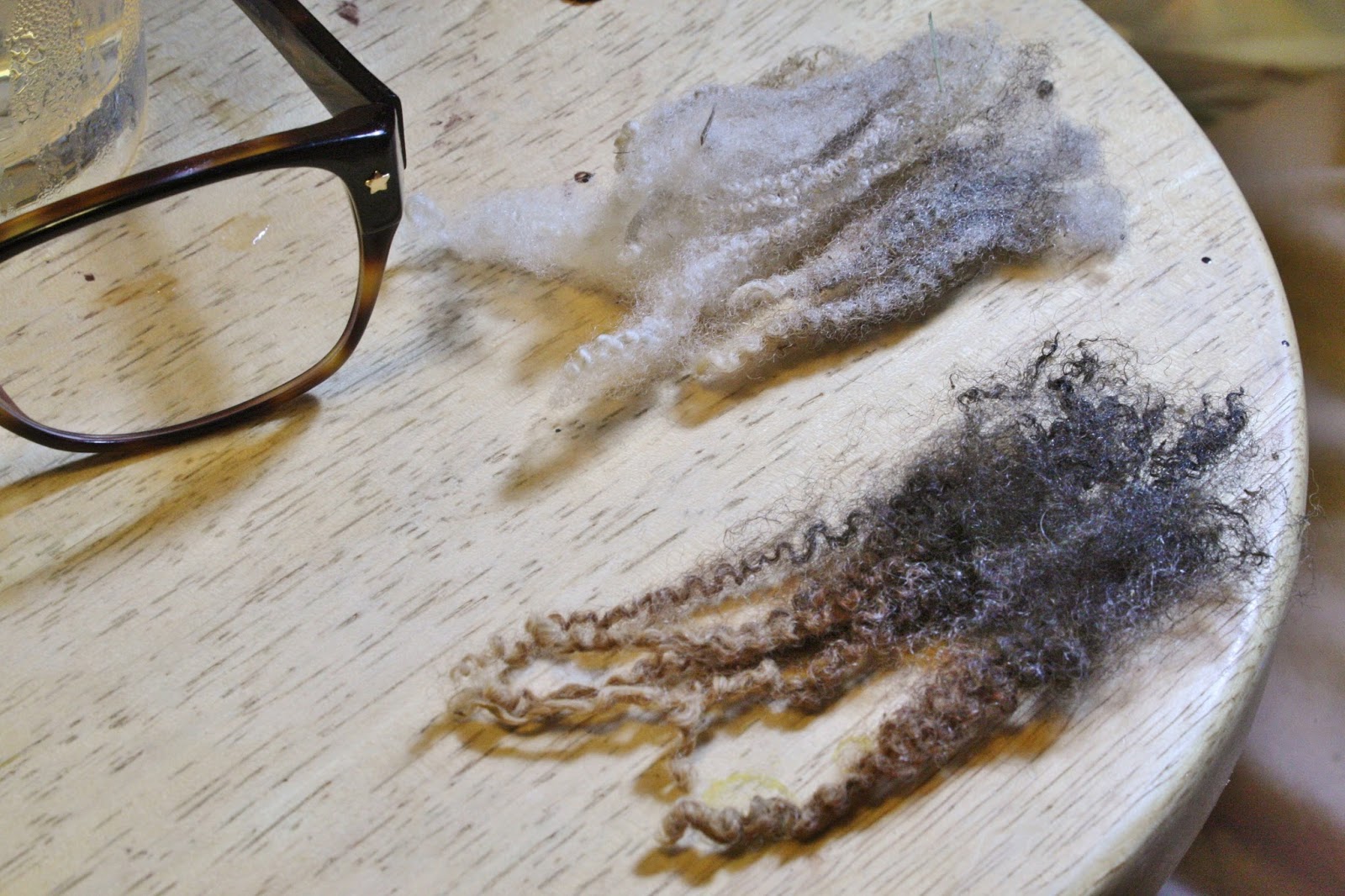 a hot bath and a rinse later... 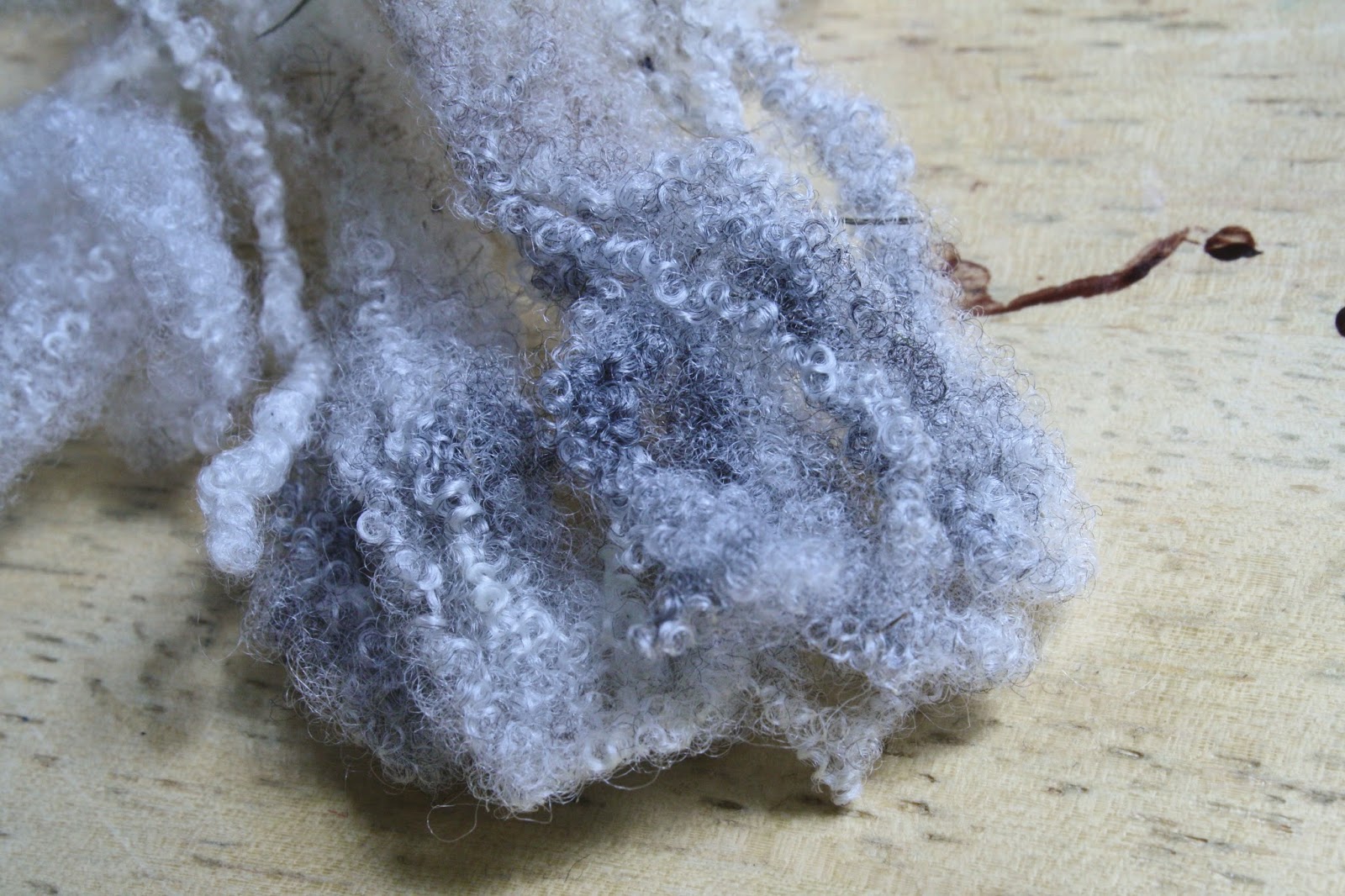 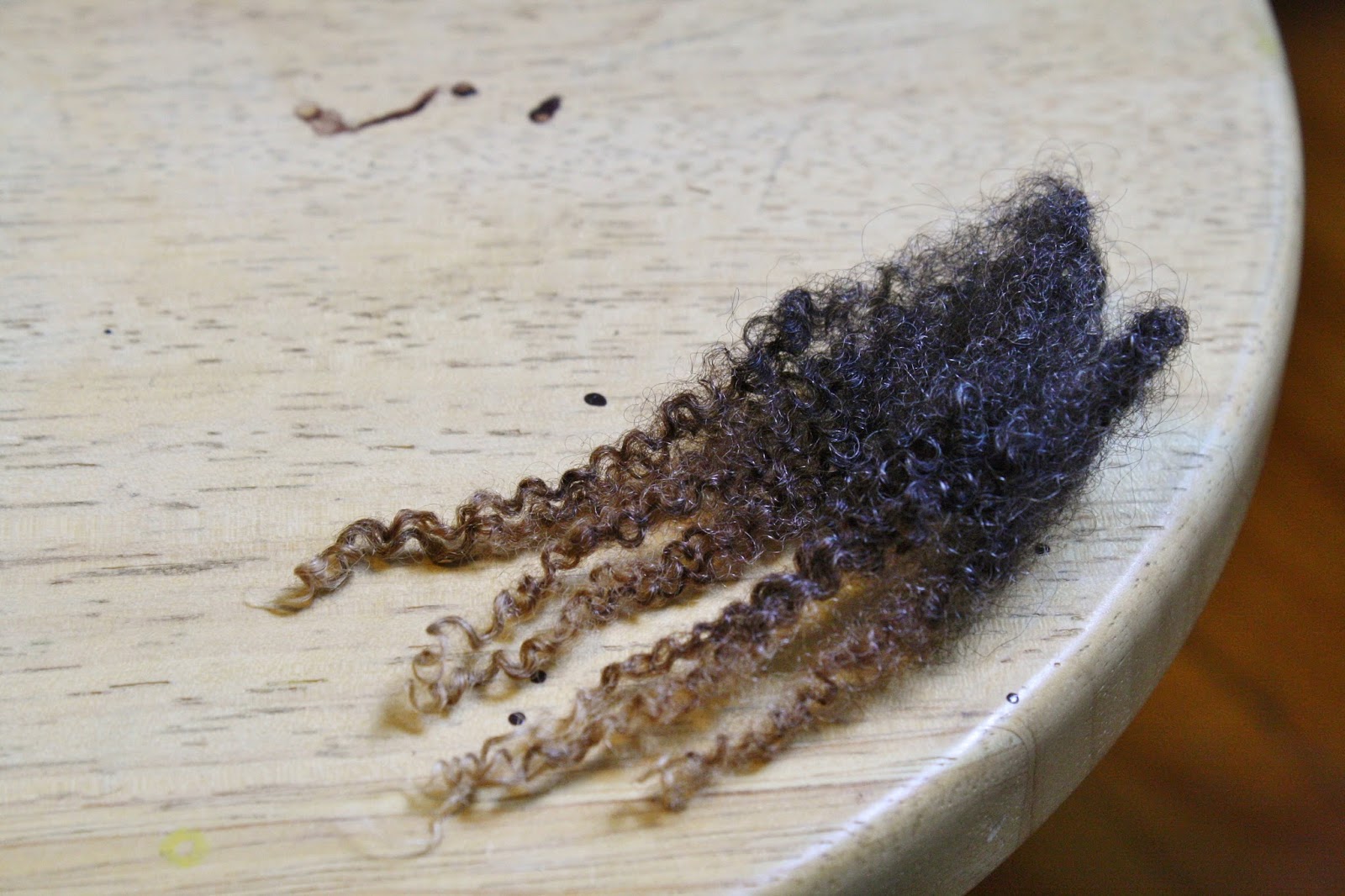 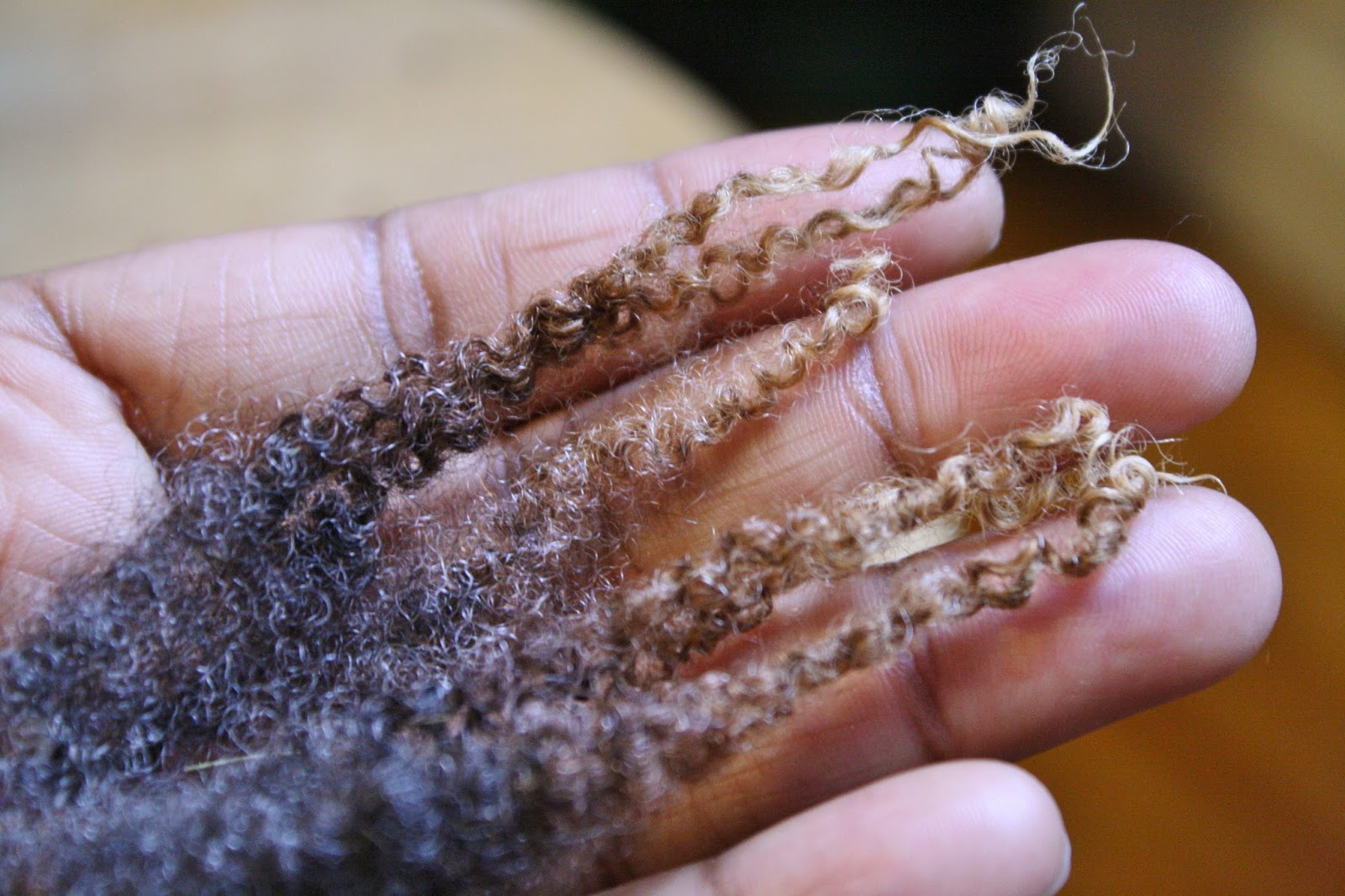 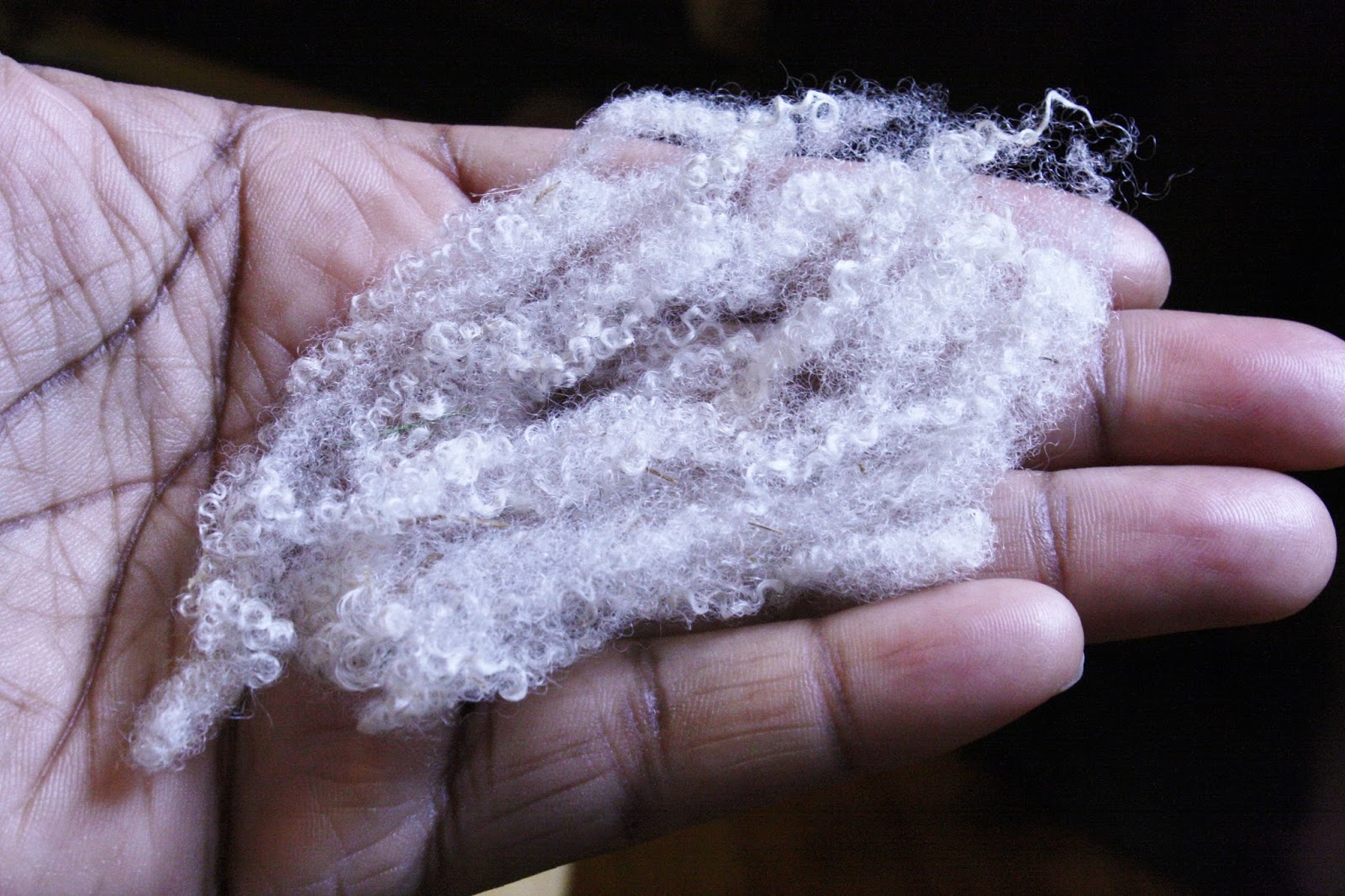 yep... happy place!  gonna save the brunette for another day, but i couldn't resist sorting and washing the white/grey one last night, and it was almost dry by the time i woke up (although, to be fair, i did sleep in late this morning). it. is. gorgeous.  so very happy place!!! [i recognize that i stay straddling the line between dork and geek, but when the zombie apocalypse comes, how many of your friends will able to recycle the wool of the undead (sheep, that is) into fashionable knitwear?  this is why people keep me on their 'must survive at all cost' list.] 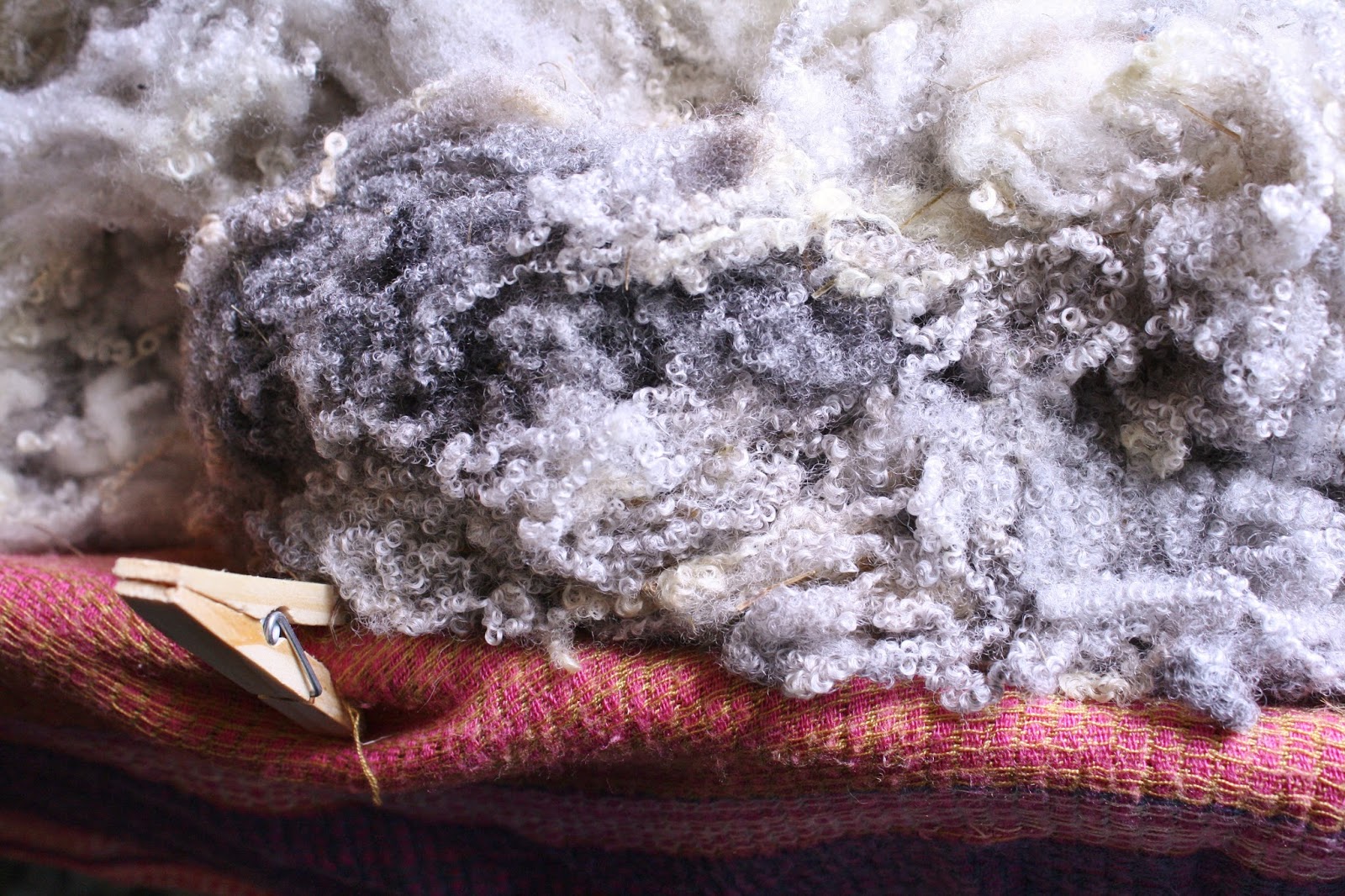 so... not only am i doing silly things like rolling around in dirty, greasy, smelly parts of sheep in the middle of a heatwave, but i've also been baking!!!  in my defense, i have been avoiding wheat for nearly two months now (which means no bread, pasta, pizza, pastry, or even a lousy cookie or slice of buttered toast to nibble on alongside a cup of tea).  i'm not talking about the bandwagon gluten-free diet everyone and their grandma seems to be on these days. mine is a straight-up, no-holds-barred case of death by toast (seriously... i ate slice of whole-wheat toast a few years back and almost ended up in the hospital).  sure, i used to sneak in the odd plate of pasta or indulge in an occasional too-lazy-to-cook dinner of pizza (possibly, the most perfect food on the planet), but those days are long gone.  the aftermath kept getting worse, so i had to go cold turkey... which is really really really hard when you have a deep, passionate love of all things wheat. [i have been known to sniff bread in the supermarket, but i have (mostly) put that behind me].

you have to understand... i grew up in NYC (amazing pizza and bagels right out of the oven every which way you turn), and now i live in Montreal—a.k.a., Paris lite—where people practically toss yummy pastry at each other as a form of friendly greeting.   couldn't Mother Nature find a slightly less popular food group to add to my naughty list?  it's like moving to the coast of Maine, then being told you'll die if you eat the lobsters.  complete and utter madness!  i would gladly give up potatoes or even... gasp... beer and vodka (for LIFE!) if only i could go back to adding bread to my grocery lists.  sigh! it's been torture, but i accept that changes have to be made to my eating lifestyle. so, naturally... i've started BAKING!!! 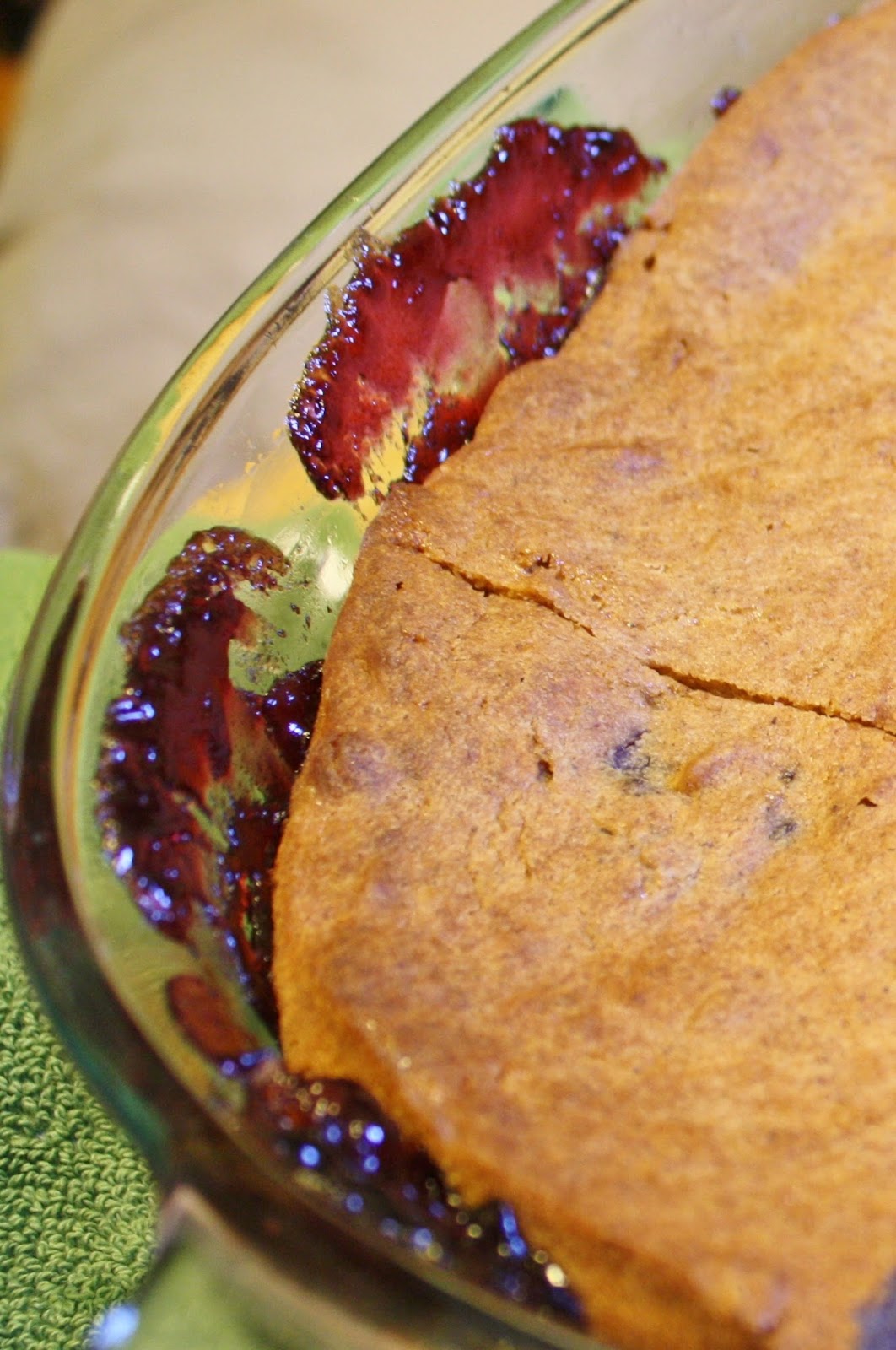 this is my first ever experience baking with one of those gluten-free "flour" blends.  i've also made a couple batches of pancakes in the past week using oat flour as the sole starch, and i will likely give rye flour a test-run for bread making when the weather returns to sub-zero conditions.  it should be safe, just as long as i steer clear of the forbidden grain and its close relative, semolina (i.e., the yum in pasta and couscous).

i take zero credit for this delicious cherry cobbler.  the recipe was found here during a desperate search for something to satisfy a particularly strong craving (without having to take a trip to the store... that part was really important to both of the lazy people who live here).  i followed the proportions as noted, but i did reduce the amount of sugar in both the cherries and the batter to ½ c each, and it's still too sweet for my taste.  i also added some fresh grated ginger to the cherries and some lemon zest and ginger powder to the batter mixture.  it is tasty, but next time i will skip the batter and just top the cherry mixture with a crumbly blend of oatmeal, chopped nuts, and coconut flakes and serve it up with a scoop of good vanilla ice cream.  don't think i'm a fan of the texture of the gluten-free rice/potato/xanthan blend.  it just felt off in an unsettling way.  for now, i'll stick to the oat flour, as i really enjoyed the mouth-feel (it's a technical term) it produced in the pancakes.  was like a hearty,old-fashioned flapack with a touch of nuttiness to the taste and texture, so it's a definite keeper.  yes, yes, i know... i am suffering, but i'll just keep on fighting my demons one delicious dish at a time.
Posted by n.ayisha