according to the calendar, it's late August in Canada... so the first snowstorm must be lurking around the corner. it's about this time of year that my fancy turns to thoughts of all things warm and woolly.  i'm cleaning up and organizing the yarn stash in anticipation of restocking (which is a nice way of saying that i am camped out by the window, waiting for the first of many packages to arrive bearing even more yarn).  i found some of my own hand-dyed, hand-spun yarn along the way, and it's inspired me to revisit the world of dyeing.  just need to find a wool supplier... or an unsupervised herd of sheep. 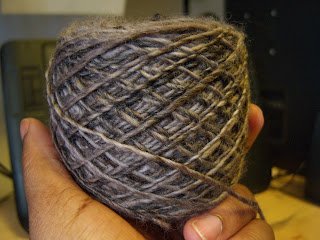 it's difficult to find an image that captures the rich tonality of this yarn.  i call the colorway "guinness".  it reminds me of a pint of stout being pulled, before it separates into distinct layers... a delicious blend of dark, chestnut brown and barely-dyed taupe.  this was the first attempt at breaking down a solid-color dye into a range of saturation values in one simple, lazy step.  Bluefaced Leicester (BFL) is my go-to breed for dyeing and spinning. the wool is soft enough for next-to-skin wear, and has a bit of sheen that shows off fancy stitches nicely. Corriedale wool is also very easy to dye and spin, though not quite as soft, so i reserve it for hearty projects or items to be worn over other clothing. 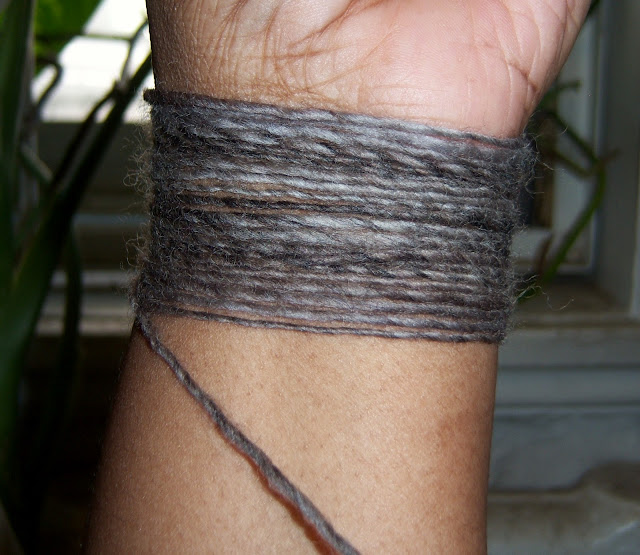 this was another attempt at the "one-step" method... except, i used two steps... and two colors.  the wool was first sparsely dyed in a relatively weak blue solution, and once it had absorbed all of the pigment, a reddish-pink color was added to the dye pot.  i adjusted the pH in the second step in order to allow some of the blue to bleed back into the pink... resulting in something that plays between lilac and violet.  this was a very loosely spun single, and it feels very spongy and almost weightless once it's knitted up.  the combo was never given a proper name, but it does make me think of "berry ripple" ice cream on one of the few remaining days of summer.  how time flies. 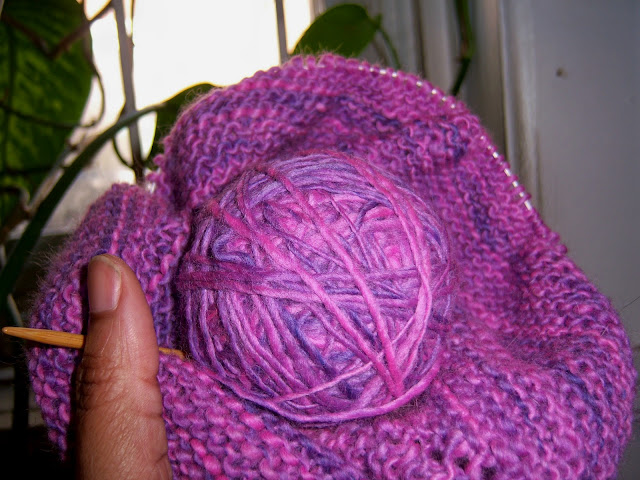 somewhere near the bottom of the stash, i came across a small bundle of the yarn that made me a true believer. it's always nice to walk into a yarn shop and find something inspiring, but nothing beats the sheer magic of seeing your own creation come to life in your hands. the palette included chestnut, pumpkin, peacock blue, cornflower, and one or two other colors that have since fallen out of memory.  this combo remains unnamed.  there is no word in the English language that suitably describes this kind of happiness. 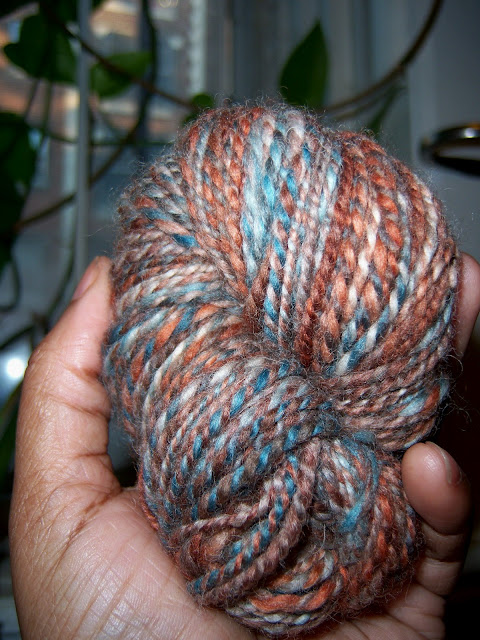